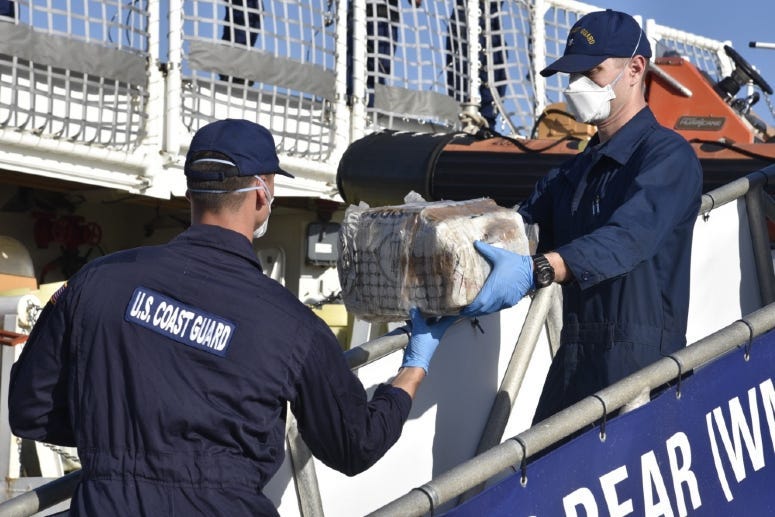 Last month the U.S. Coast Guard and the British Royal Navy seized over 3,000 pounds of cocaine and detained nine suspects during two separate interdictions in the Caribbean.

On Jan. 24th, the RFA Mounts Bay was on patrol with a LEDET on board, when two suspected smuggler speed boats were spotted. The LEDET (Law Enforcement Detachment), specifically the TACLET (Tactical Law Enforcement Team) element, is the Coast Guard version of a SWAT Team that conducts drug interdictions and ship boarding operations. They are a part of a robust capability that has existed in the Coast Guard since the 1980s. In this case, they were further supported by a Coast Guard Helicopter Interdiction Tactical Squadron. With helicopter support, the LEDET was launched from the British ship and successfully intercepted both vessels off the coast of St. Croix. Suspected contraband was confiscated and seven suspects arrested.

Then on Jan. 30th, the Coast Guard Cutter Bear detected a speed boat near Isla Beata, Dominican Republic. The cutter intercepted the ship and a boarding team searched the vessel, finding bales of suspected contraband and detaining two suspects.

"Between October 2019 and December 2019, the Coast Guard and Caribbean Border Interagency Group authorities have seized 12,060 kilograms of cocaine and 407 pounds of marijuana during law enforcement operations surrounding Puerto Rico and the U.S. Virgin Islands. The wholesale value for these seizures is worth more than $314 million," a Coast Guard press release stated.