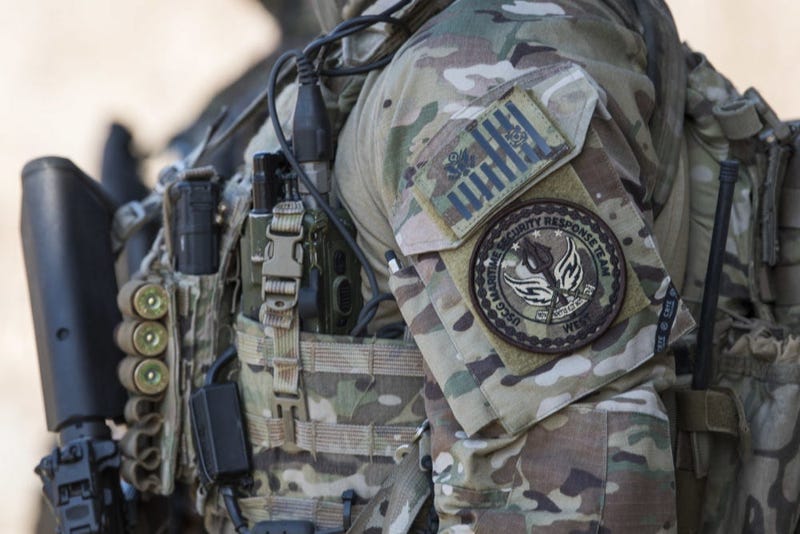 Coming on the heels of a Coast Guard drug bust that went viral in July, the Coasties managed another bust last month seizing $69 million dollars worth of cocaine from a semi-submersible they interdicted in the Pacific Ocean.

Semi-submersibles, so-called narco subs, have ballast tanks that allow the crew to adjust the boat's buoyancy so that the hull rests below the sealine...making them nearly undetectable.

The only way to spot these semi-submersibles is by air, which is why their tops are painted blue, camouflaging their outline in the ocean, which is what happened in this case. Once identified, an interdiction team from the Coast Guard Cutter Harriet Lane was dispatched to intercept the drug smugglers. Luckily, the semi-submersible was captured before the crew could scuttle it by flooding the hold.

The 5,000-pound cargo of cocaine is about the typical size of contraband transported by smugglers employing semi-submersibles, which originate in the mangrove swamps of Colombia where they are constructed in jungle redoubts. Once launched, these narco-subs take a two-week journey up the Pacific coast. It is a hellish endeavor for the average four-man crew living in cramped quarters with no toilet.

Once off the coast of Mexico, they rendezvous with motorboats and transfer the drugs which are then taken ashore in places like Oaxaca. From there, the drugs are transported overland. There have been no reports of these semi-submersible craft making the trip all the way to the continental United States as of today. The Colombian drug cartels have been alleged to be in cooperation with the Sinaloa drug cartel in Mexico.

The Coast Guard maintains special teams for ship interdiction, or semi-submersibles in this case, such as the Maritime Security Response Teams (MSRT), Maritime Safety & Security Teams (MSST), and Tactical Law Enforcement Teams (TACLET). A point of interest is that the Coast Guard is a part of the Department of Homeland Security rather than the Department of Defense, which means they work in a law enforcement capacity.

While not always advertised, the Coast Guard has long had a para-military capability. The Coast Guard has been involved in the war on drugs since 1973, and TACLETs entered the fray in 1982 patrolling the Caribbean for drug smugglers. In the 1980s, the DEA, Navy SEALs, and US Special Forces participated in Operation Blast Furnace in Bolivia which saw them working with a host-nation partner force to destroy drug labs.

This evolved into Operation Snow Cap which included a mandate for a marine counter-narcotics force that could conduct riverine operations in Bolivia where drug smugglers operated. The Coast Guard was brought into the mission in 1988 to train and advise the Bolivian Navy Riverine Task Force, the experience detailed in Matthew Mitchell's book "Not Your Father's Coast Guard: The Untold Story of US Coast Guard Special Forces."

Building off of these early para-military and Special Operations type missions, today's MSRT, MSST, and TACLET teams form a robust maritime law enforcement capability that is able to respond to anything from drug shipment interdiction, to counter-weapons of mass destruction proliferation and waterway security.