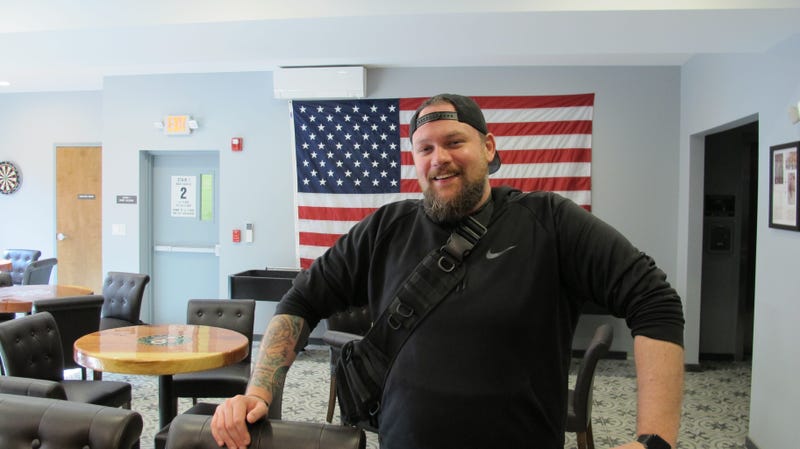 The new American Legion building belonging to Post 107 on 2nd Street in Hoboken, New Jersey features a brand new bar made from rare wood with a custom made American flag design encased inside it. On the wall behind it hangs replica rifles from each major conflict in American history since 1941. There is even a World War II-era flame thrower that you might be allowed to play with if you ask the members nicely. It is a place for veterans, by veterans to gather and socialize over a few drinks.

But this post is also much more than that, it's providing housing to homeless veterans.

When Hurricane Sandy blasted through the tri-state area in 2012, it did 70 billion dollars of damage, and left much of Hoboken underwater. The American Legion Post 107 that was located in a old aircraft hangar on 2nd Street was flooded, destroying everything inside with the water line reaching five feet high. A light with the American Legion emblem on it was the only item salvaged; all of the memorabilia, much of it from World War I was lost. Post 107 as it had existed since 1927 was no more.

"For years after Sandy, there was a lot of head scratching on how to recover. Eventually the decision was made to knock down the old post and do something more foreword thinking," Army veteran Joshua Lees told Connecting Vets. "The idea to build a new structure required a bunch of money donated from state and local government and through private donations. An idea was born to give back to the veteran community and build housing for homeless veterans." Lees served with Civil Affairs in the Army and deployed to Iraq.

After Sandy, 3.2 million dollars was raised to rebuild the American Legion, with additional donors coming in to make sure the apartments for homeless veterans are fully furnished. Vietnam veteran Jon Carey led the effort as the current commander of Post 107. 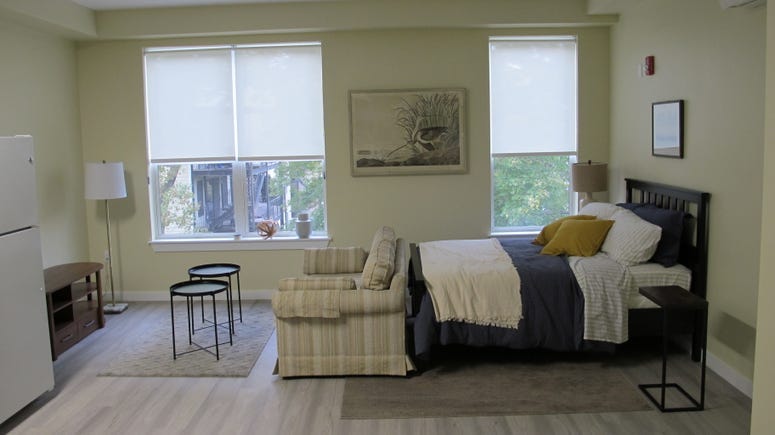 2018 marked 100 years of the American Legion, having been established just after World War I. The year after its centennial, the new American Legion in Hoboken opened its doors. The building features recreation space, flood proofing, a bar, and most importantly, six apartments upstairs for homeless veterans. The new American Legion combines the social aspects of the organization with giving something back to the community. Homeless veterans are referred to the American Legion by a local homeless shelter just down the street. Joshua Lees, the programs director at the Legion interviews them and receives a copy of their DD214. If space is avaliable, the veteran is then shown to their new room. The Legion asks that they pay for 30% of their income for rent, but if the individual is disabled or truly destitute, this can be waived. Currently, four of the six units in the building are occupied by veterans who were homeless. Until now.

Lees said that the city council in Hoboken has been very helpful and forward leaning when it comes to addressing the issue of veteran homelessness. To that end, they donated the parking lot adjacent to the American Legion, and a building will be contructed there that will have additional apartments for 15 homeless vets. Construction is scheduled to begin in 2020. 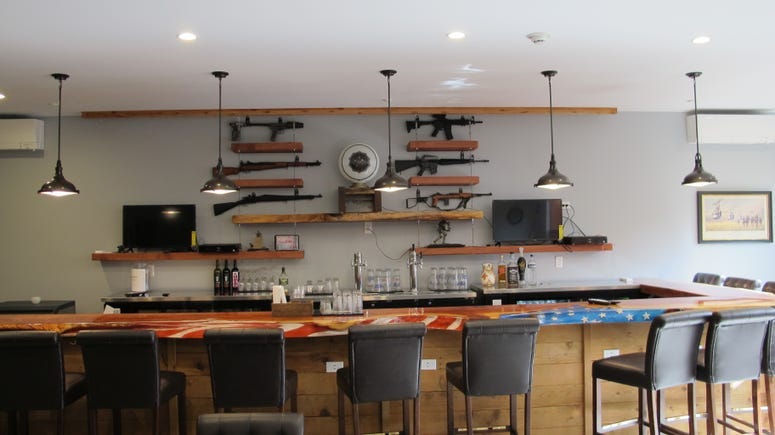 The American Legion in Hoboken also acknowledges the social aspect of the organization, and that it is important for veterans to have a place to congregate. To that end, they are currently waiting on their liquor license. The bar itself was made from Sequoia which is almost impossible to do lawfully, but the woodworkers were able to obtain the rare wood after a tree fell down naturally in California. The bartop is decorated in the colors of the American flag, featuring white stars on a blue field as well as red and white stripes, which are then encased in resin.

The tables in the bar room are made from the same tree, each featuring a emblem from a different branch of service. Behind the bar are replica rifles (to be compliant with New Jersey law) from each major U.S. conflict post-WWII. One special piece that isn't a replica is a flame thrower that originated with Lees' grandfather. Also featured is the aforementioned American Legion light that managed to survive Hurricane Sandy. 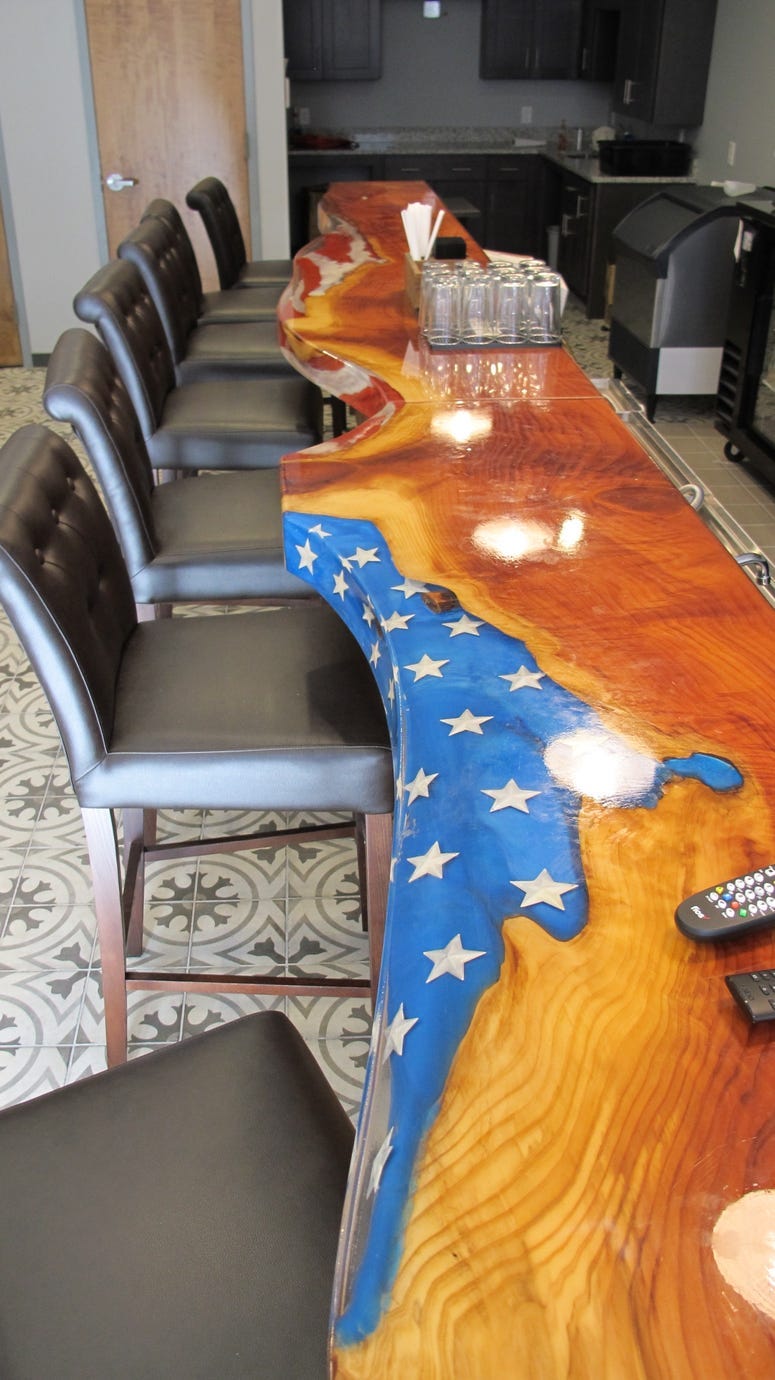 Today, Post 107 is looking for today's generation of young veterans to join the American Legion. Lees recalled that he joined the Legion in 2015 when there were only about four other Global War on Terror veterans at the post in Hoboken but today there are several hundred. President Trump recently signed the Legion Act, which makes anyone who served in the military since 1941 eligable to join the American Legion.