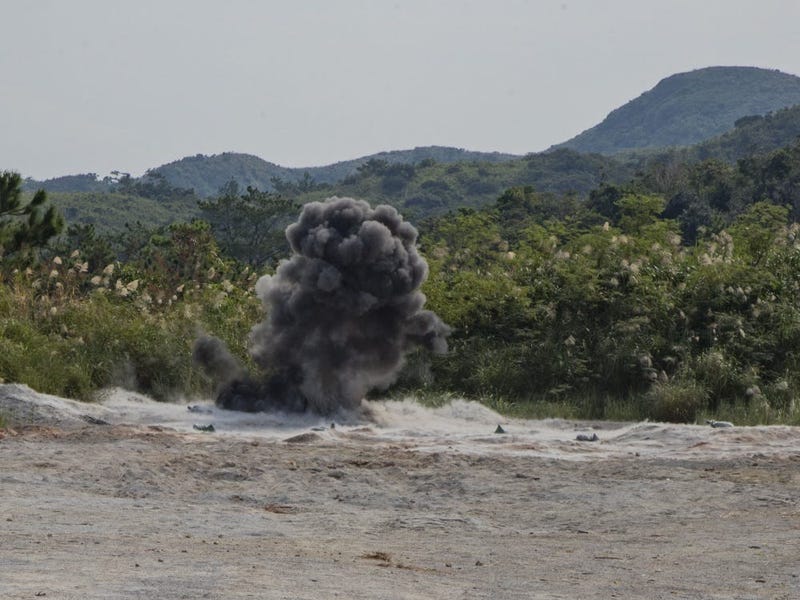 It was the year of Apollo 13, the break-up of the Beatles, the Vietnam War, and President Richard Nixon.

It was also the year that the Oregon Department of Transportation blew up a whale after consulting with the US Navy.

The event which would later enter into American lore and legend began on November 8th when an eight-ton Sperm Whale washed up on shore in the town of Florence, Oregon. At the time, the beaches were under the jurisdiction of the department of transportation, who after consultation with the Navy opted to dispose of the carcass by blowing it up.

It had already been laying there for a week, rotting away, and stinking up a storm to the point that it was a health hazard. Something had to be done. A young engineer named George Thornton received the task since his supervisor was away. While rigging a half-ton of dynamite, he told a reporter on the scene he wasn't quite sure how much explosives to use.

A World War II veteran named Walt Umenhofer happened to be in the area at the time. He had driven in from Eugene in his brand new Oldsmobile, pulling it off the lot during a discount event advertised as, "Get a whale of a deal on a new Oldsmobile." Unfortunately, he could not have possibly been able to read the tea leaves so to speak and see that this was something of a premonition. Walt had received demolitions training during the war, and as he watched Thornton rig up a half-ton of dynamite, he knew the job wasn't being done properly. It was going to take a lot more dynamite to reduce the rotting whale corpse to tiny pieces that would be picked up by scavengers and rot away.

Walt tried to warn Thornton, as he later told a reporter, but was blown off. While a crowd of over 100 people gathered around to watch the explosion, Walt shrugged and made sure he was much further away than the other bystanders.

Finally, with a crowd looking on and the entire event recorded by television cameras it was time to detonate the dynamite. "They touched that sucker off and let me tell ya, that thing went up and it was the biggest mushroom cloud you ever seen," Umenhofer later said. "It was red, and white, and black, and it was nothing but blood, and guts, and gunk."

Of course, what goes up must come down.

Time stood still for one pregnant pause, and then charred rotting whale blubber came raining down on the spectators, city workers, and news reporters. One journalist on the scene described being completely covered in a red mist as huge pieces of whale thwacked into the ground near him. He said the smell was something you could never forget and it was in his nostrils for a full week afterward.

The veteran who tried to warn of the impending disaster perhaps suffered worst of all despite having retreated back to a safe distance from the explosion. He watched helplessly as one large chunk of burned whale blubber sailed end over end through the clear blue sky. It appeared to hang in mid-air for a moment before rocketing back down to earth like a meteor. It plowed right through the roof of Walt's brand new Oldsmobile. As he recalled in an interview years later, he did, in fact, get a whale of a deal on his car. The state of Oregon cut him a check for the full cost of the vehicle in compensation.

The young engineer responsible for the entire debacle declared his rotting whale removal a complete success. He was given a promotion six months later, and to this day declines to grant interviews about the exploding whale.