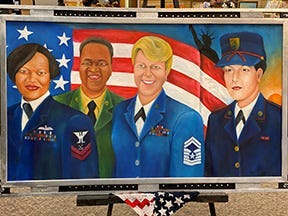 Painter and Korean War veteran Broadway Swim honored four female veterans recently when he unveiled a painting depicting them before a crowd that had gathered at a local mall in Shreveport, Louisiana.

The female vets in the painting are:

The large painting will find a  home in the new Shreveport VA Women Veterans Clinic. The unveiling was the culmination of several weeks of gathering military photos and the artist’s blending a mix of patriotism and uniform accuracy. 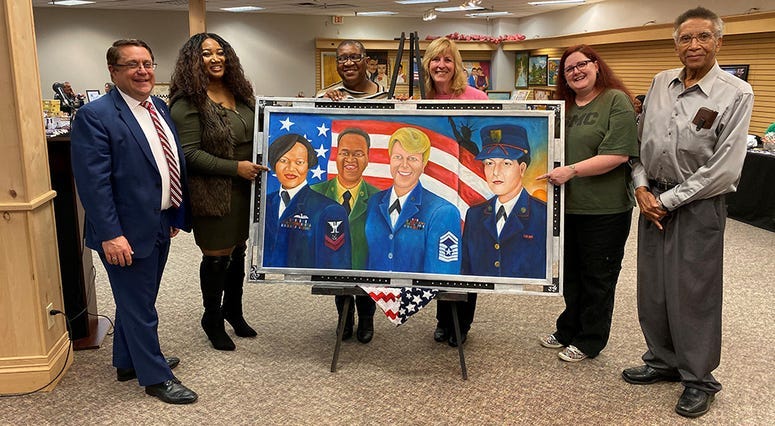 Gwendolyn Hampton, who is a Marine mom, approached Swim about painting the veteran portrait.

“I’m involved with veteran programs and I asked if he would paint something for women,” she said.

Swim, a veteran of both the Army and Air Force, said he was glad to undertake the project.

“These women have gone far beyond the call of duty,” he said. “It was a choice to serve, and service is one of the greatest things anyone can do in America.”

“When I arrived to receive the donated painting, I was amazed at the artist’s ability to capture the personalities and likenesses of these women veterans,” he said.

The women in the painting all receive care at the Shreveport medical facility, Crockett said.

The new Women Veterans Clinic is expanding from a current space that is around 1,500 square feet to an area of almost 7,000 square feet.

Women veterans get a statue at Southwest Louisiana Veterans Home