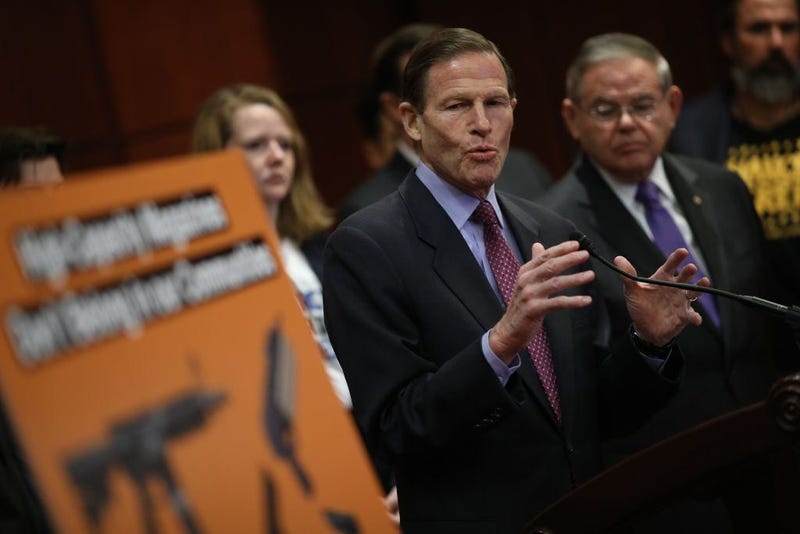 The announcement comes just after two mass shootings in El Paso, Texas and Dayton, Ohio which led to the death of 31 people and dozens of injuries, as of Monday at 3 p.m.

President Donald Trump, during a White House speech, also called for the so-called "red flag" laws, to take guns with "rapid due process" from people who "pose a grave risk to public safety" or prevent them from obtaining firearms at all.

"We will be finalizing the details for this bill and reaching out to colleagues on both sides of the aisle in the coming days and weeks," Blumenthal said in a statement about the bill on Monday.

The grants would be given to local law enforcement "so they can hire and consult with mental health professionals to better determine which cases need to be acted upon," Graham said in a statement Monday.

Graham also said he spoke with the president Monday morning about the bill "and he seems very supportive."

Blumenthal, a member of the Senate Veterans Affairs Committee, previously said he was working on a red-flag bill to take guns from people -- including veterans -- at risk of committing violence against themselves or others.

During a June 19 hearing on the veteran suicide rate -- 20 per day, according to Department of Veterans Affairs data -- Blumenthal asked VA Secretary Robert Wilkie about plans to provide gun storage safety for veterans' homes. Wilkie told Blumenthal VA already has a gun lock program, but there are plans for more.

Blumenthal said at the hearing that his red-flag legislation would only remove firearms from people after due process, including a court proceeding and issuing a warrant.

Veterans are also three times more likely to die by suicide if there is a gun in their home, Wilkie said.

Blumenthal also asked Wilkie at the hearing for a commitment to form a group to study gun violence, suicide and veterans and report back to Congress. Wilkie said the president's recently formed task force to prevent veteran suicide plans to analyze gun safety.

Gun violence is especially concerning for veteran suicide, Blumenthal said at the hearing, because with other forms of death by suicide, there can be more time to save someone. But "with gun violence, you have no time," he said.

Graham and Blumenthal have worked on similar legislation in past sessions but were unsuccessful in passing a bill on the to the president's desk. Blumenthal has a long record of proposing gun control legislation.

"Many of these shootings involved individuals who showed signs of violent behavior that are either ignored or not followed up," Graham said. "State red flag laws will provide the tools for law enforcement to do something about many of these situations before it's too late."

If you or someone you know needs help, contact the Veteran Crisis Line 24/7 at 1-800-273-8255 (select option 1 for a VA staff member). Veterans, service members or their families also can text 838255 or go to veteranscrisisline.net.
Reach Abbie Bennett: abbie@connectingvets.com or @AbbieRBennett.

More active-duty service members died by suicide in 2018 than ever before, report says