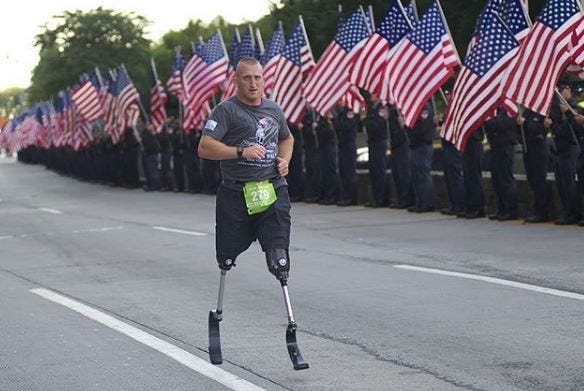 Marine Corps veteran Rob Jones lost both legs when an IED exploded beneath him in Afghanistan.

On two prosthetic legs, Jones had to re-learn how to walk, bike, row and run. He eventually was able to complete 30 marathons in one month, which he did to raise money for veteran charities. Now, on the anniversary of the event that changed his life forever, Jones announced that he’s “running to change Congress”.

Jones becomes the second candidate competing for the Republican nomination to challenge Rep. Jennifer Wexton (D-Va) in 2020.  He seeks to win back the seat of Virginia’s 10th Congressional District which spans from Loudon County (just outside DC) to the rural areas around Winchester, Va.

More than just a fellow veteran, Jones is a contributing writer for ConnectingVets.com and a friend we’ve gone hunting with before.  So we called him and asked about his decision to run for office and how he feels about a few of the hot topics of the day:

Why he’s running for office

“I’ve actually been considering it for a while. I’ve noticed over the last several years that there’s been a lack of leadership and selflessness in Congress and the government in general. And those are attributes that my life has been about ever since 2006 when I joined the Marine Corps.  Things like: never being deterred from the mission, and being the one to do the right thing regardless of the personal consequences or sacrifices I have to make, and being the type of person that looks out for interests of others rather than my own … so I’m running to bring that Marine Corps attitude of service-before-self to Congress.”

“As a veteran, I think we’re definitely beginning to see the VA improve a lot.  I think giving veterans more choices on where they can receive some health care is a huge benefit. And then it’s kinda what I’ve always talked about with 'Rob Jones Journey,' that we don’t see ourselves as victims.  We keep that mentality as fighters and continue to fight.”

Rob Jones on battle scars: 'We Still Need You'

"Y’know my wife is an immigrant so I’ll be the first to tell you that I think immigrants are a boon for our country.  But we have to make sure we have a fair and just system.  I’ve done a lot of research on all the big national issues and I can tell you we have to have a secure national border.  But really it has to be regionally based.  Based on what the people on the ground are seeing and what they know is going to be effective.  You just have to allow for a decentralized command.”

What’s one of the things he wants to do for the people in his district?

"There’s a lot of big issues we could talk about, but one of the things that’s specific to Virginia’s 10th District, I was reminded of when you called. I was driving back from DC and got stuck in traffic, of course.  So everybody cares about infrastructure.  People here are just wasting hours and hours stuck in traffic, and it’s just ridiculous.  I was on my to an interview this morning and there was a gigantic accident on 495.  We have to think of ways to reduce the volume of traffic on that road, or we’re going to continue to lose people to traffic accidents that don’t have to happen."

What’s something he’d like to see change in both parties?

What are you better at, goose hunting or politics?

“Well considering I missed every goose we shot at that morning, I guess politics.  It’s not hard to do better than total failure.”

Considering all that Jones has already achieved, we know for him failure is never an option.

Read here for more information on the Rob Jones for Congress campaign.