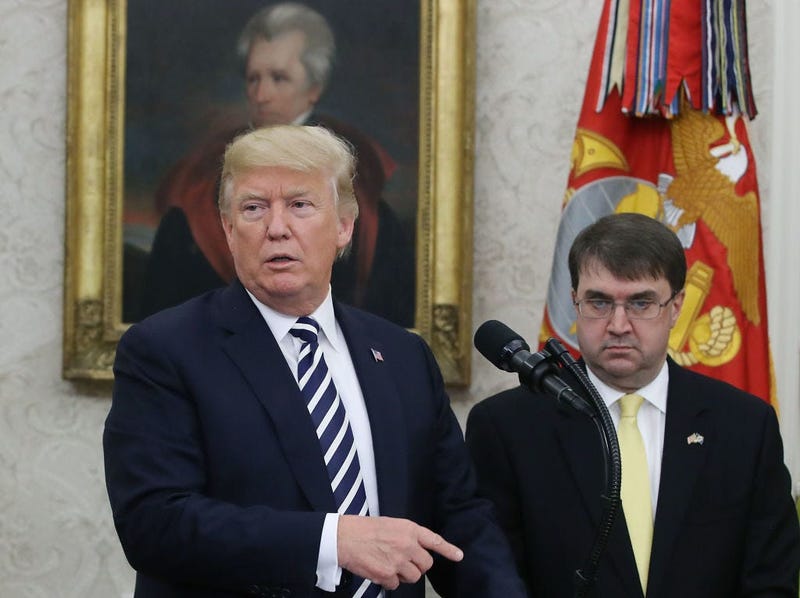 Veteran advocates and Democrat lawmakers on Capitol Hill say they're concerned the Department of Veterans Affairs isn't following through with promises made by President Donald Trump in a 2018 executive order intended to help prevent veteran suicide.

Now, veteran advocates are joining the call. AMVETS on Wednesday published a statement expressing "deep concern" over "lackluster follow-through" on past presidential orders that could continue with the implementation of more recent suicide prevention efforts.

"Veterans are at the highest risk for suicide during the first 12 months of their separation from the military," the senators wrote. "The Trump Administration made significant promises to improve the transition experience and connect service members to mental health resources. However,  almost three years after the EO was signed, VA has not made meaningful progress towards improving mental health care access and preventing veteran suicide, or even completing the tasks assigned in the EO by the president."

That executive order would have expanded mental health services for all service members transitioning to civilian life for a minimum of 12 months, then-VA Secretary Dr. David Shulkin said at the signing, saying the benefit would be available in March, just a few months later. The senators alleged that the benefit was still not available, "leaving up to 60% of newly transitioned service members without lifesaving care."

The senators, and now AMVETS, are now concerned that this lack of action from VA could be a sign that action won't be taken to fulfill other suicide prevention efforts such as the president's new suicide prevention plan and campaign, "PREVENTS," revealed earlier this year and the new landmark bill he recently signed into law, the Cmdr. John Scott Hannon Veterans Mental Healthcare Improvement Act.

“This is extremely troubling and would make anyone with a vested interest in our military, veterans and their healthcare rightfully question the substance behind any executive order signed in the future," AMVETS National Executive Director Joe Chenelly said in a statement. “We are in the crosshairs of a veteran suicide epidemic with no solution in sight and a worldwide pandemic forcing many veterans out of jobs, socializing and many of their routines and habits. The one factor our service members and veterans should be able to fall back on are programs signed by our commander in chief, staffed by nationally touted task forces, and reinforced by our government’s resources and funding."

But they can't depend on it, Chenelly argued, because "the effort is not there."

"If these allegations brought forth by the Senate regarding the (executive order) are true, there is going to be exponential worry about how implementation of the PREVENTS executive order will go,” he said.

AMVETS chief strategy officer Sherman Gillums said the issue is representative of a greater problem within VA, a "yawning chasm that has long existed between VA central office and VA medical centers, where policy seems to be a matter of choice rather than direction from the top."

Despite the executive order, Gillums said, veterans with bad-paper discharges were "still being turned away" for mental health help at VA.

"To make matters worse, the actual impact of the PREVENTS executive order hasn’t lived up to expectation, in terms of policy impact," he said, citing a survey sent to veterans a few months ago which "didn't work for many who were invited to complete it" and the plan itself "remains in the abstract, with no real practical application."

VA pushed back against allegations it had not taken action to implement the president's order, arguing it followed his directive, calling them "false."

"The EO mandated the creation of a Joint Action Plan by DoD, DHS and VA for providing transitioning service members and veterans with seamless access to mental health treatment and suicide prevention resources in the year following discharge, separation or retirement," VA Press Secretary Christina Noel said in a statement Wednesday. "(That plan) was accepted by the White House and has been under implementation since May of 2018."

Noel argued that second-quarter fiscal 2020 data shows 85% of transitioning troops who responded to a survey reported being informed about mental health services available to them and 37% of transitioning service members who separated during that period enrolled in VA health care.

The president's executive order also "inspired" VA to launch its "Solid Start" program, Noel said, which is designed to reach transitioning troops within their first year outside the military. That program started in 2019, and informs veterans of services available to them, including mental health care benefits. As of the end of September, Solid Start had reached more than 69,000 transitioning troops (56%) and more than 12,000 (73%) newly separated veterans who had mental healthcare appointments during their final year on active duty, Noel said.

The latest VA veteran suicide data report from 2019 found that on average, about 17 veterans died by suicide per day in 2017. That number has remained the same or worsened in recent years despite increased spending and programs aimed at helping. The data typically is delayed by about two years, though, making it difficult to determine whether efforts have made a significant difference year over year. More than 6,000 veterans died by suicide each year from 2008 to 2017, according to previous reports.

Since that data lags behind by about two years, advocates and lawmakers worry they won't have a concrete grasp of how the pandemic has affected suicide rates for veterans -- but they agree that the isolation and stress caused by the turmoil spreading alongside the virus likely won't improve things and that veterans, troops and their families need more help now than ever.

While the Pentagon has hesitated to link the pandemic to an increase in service member suicides, Army officials disagreed, arguing that the isolation and stop-movement orders meant to stem the tide of the virus have hurt soldiers' mental health.

"At some point, words have to translate into action and results, especially at a time when rates of anxiety and depression across society, which includes veterans, service members, and military families, are going in the wrong direction," Gillums said.

Data on vets who die by suicide on VA property is incomplete, inaccurate, report finds