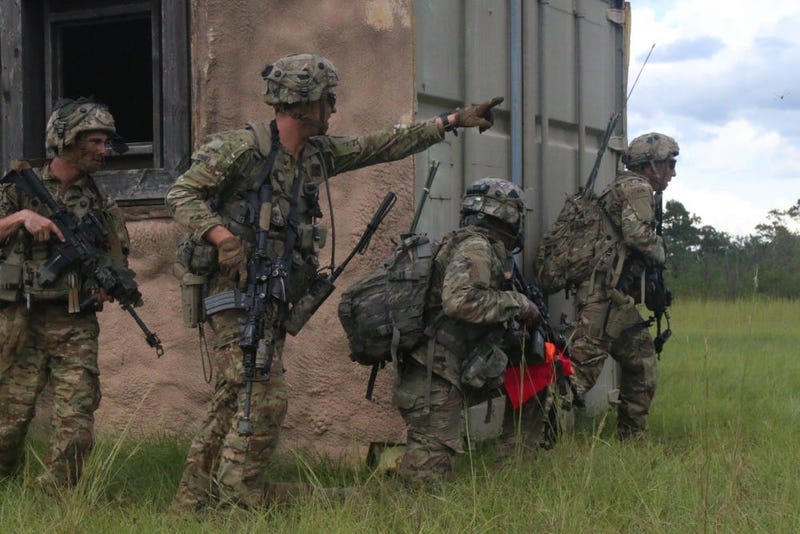 Arctic Anvil 2019 is a culminating training event that prepares soldiers for no-notice rapid deployments to potential combat zones around the world.

During the course of the exercise, soldiers and their equipment are loaded and transported via aircraft. Paratroopers assigned to the 4th Infantry Brigade Combat Team of the 25th Infantry Division (4/25) conducted a mass tactical parachute jump into a simulated combat zone, meaning that the infantrymen with their weapons and equipment exit the aircraft in rapid succession and parachute to the drop zone the same way they would during an actual combat jump into enemy territory. From there, the 4/25 soldiers moved out to conduct force on force and live fire training.

“I am proud of our crews for this exercise,” a pilot named Lt. Col. Mark Suckow said in a Air Force press release. “They executed the mission as planned and helped us to meet our objectives. Time over target for airdrop and air-land operations were executed flawlessly. The air-land portion into the (landing zone) was completed in less than minimal time from landing to takeoff. Having the opportunity to work with thousands of soldiers in a large scale exercise like this is very beneficial training for us, it prepares us for real-world operations.” But not everything went as planned.

During an airborne operation on the night of Oct. 2, 23 soldiers had to be hospitalized after an entire stick of paratroopers was blown into the trees. Firefighters had to come and help cut some of the entangled jumpers out of the trees while others were transported to the hospital to have their injuries treated. The incident occurred at a drop zone at Camp Shelby in Mississippi.

"Airborne Operations all bear an inherent risk. We strive to mitigate this risk as much as possible. Forrest General Hospital was notified prior to the jump of the potential influx of patients and the types of injuries to be expected and emergency vehicles were on standby on Camp Shelby prior to the jump," 4/25 said in a released statement.

Thankfully, there were no life-threatening injuries and training continued, with the troops on the ground getting a re-supply of food and water parachuted to them several days later.

The reason for the bad jump was chalked up to the wind, which blew the soldiers off of the drop zone while they were under canopy and into the forest.

Want to get more connected to the stories and resources Connecting Vets has to offer? Click here to sign up for our weekly newsletter.
Reach Jack Murphy: jack@connectingvets.com or @JackMurphyRGR