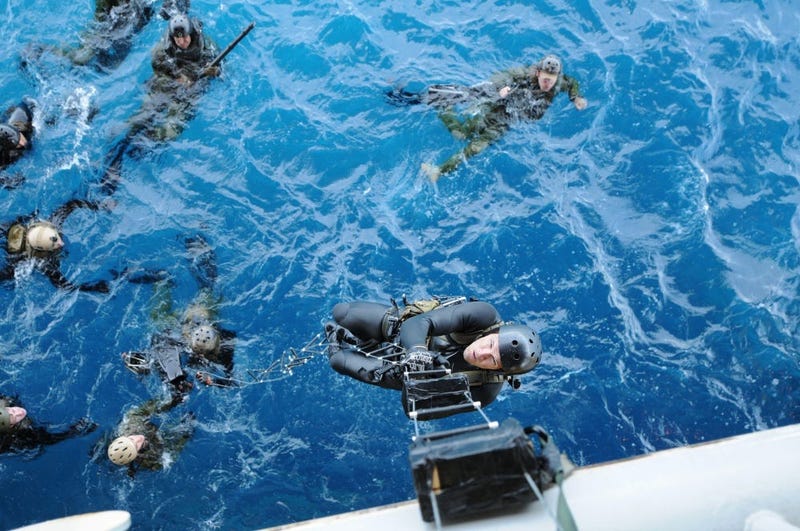 During one of President Donald Trump's recent tweetstorms, he retweeted a disproven conspiracy theory that the Obama administration staged the mission that killed Al Qaeda leader Osama bin Laden.

This particular conspiracy theory has been making the rounds on the internet almost since the day of the SEAL Team Six raid on bin Laden's compound in Abbottabad, Pakistan -- but it was given a new flavor and spin by several interesting personalities.

The conspiracy had new life breathed into it with a video interview filmed by a falconer named Alan Howell Parrot speaking with Nick Noe who is an Air Force veteran turned "Benghazi whistleblower." His Twitter profile has three stars in its header, representing retired Gen. Michael Flynn who is a QAnon supporter. Also in the interview is Charles Woods, who is the father of the late Navy SEAL turned CIA contractor Ty Woods, who was killed in Benghazi.

"Vice President Biden spent the blood of SEAL Team Six," Parrot claims in the interview. "He spent their blood like currency."

Their conspiracy theory intertwines previous conspiracies, updating them just in time for a presidential election. According to them, the U.S. government cut a deal with Iran to replace bin Laden with a body double, who was then killed by SEAL Team Six. Also blended into the conspiracy are connections to the attack on the State Department and CIA facilities in Benghazi, Libya as well as "connecting the dots" to the Extortion 17 crash in Afghanistan.

It is almost too asinine to get into, and it becomes impossible to prove a negative, but suffice to say there is no basis for these conspiracy theories. On the Extortion 17 crash, credible journalism was produced on this subject by Ed Darack in his book, "The Final Mission of Extortion 17." The SEALs who died in the crash belonged to Gold Squadron, while the SEALs who killed bin Laden belonged to Red Squadron. They are not the same SEALs, and these two events are not connected to one another.

However, these conspiracies appear to have added credibility when politically motivated individuals who served in the military or intelligence community espouse them. Or the president of the United States, in the case of Trump retweeting the conspiracy.

During a town hall meeting this week, NBC's Savannah Guthrie pressed Trump on why he would retweet a lie like that which disparages the SEAL operators involved in the mission.

Much like when he has been asked to denounce the QAnon conspiracy, Trump deflected saying, "I know nothing about it — that was a retweet, that was an opinion of somebody. I'll put it out there, people can decide for themselves, I don't take a position."

Former SEAL Team Six operator Rob O'Neill is the most publicly visible member of the team that killed bin Laden in Pakistan and has openly repudiated conspiracy theories about the event, confronting Trump despite being a long time supporter.

Very brave men said goodby to their kids to go kill Osama bin Laden. We were given the order by President Obama. It was not a body double. Thank you Mr. President. Happy birthday @USNavy