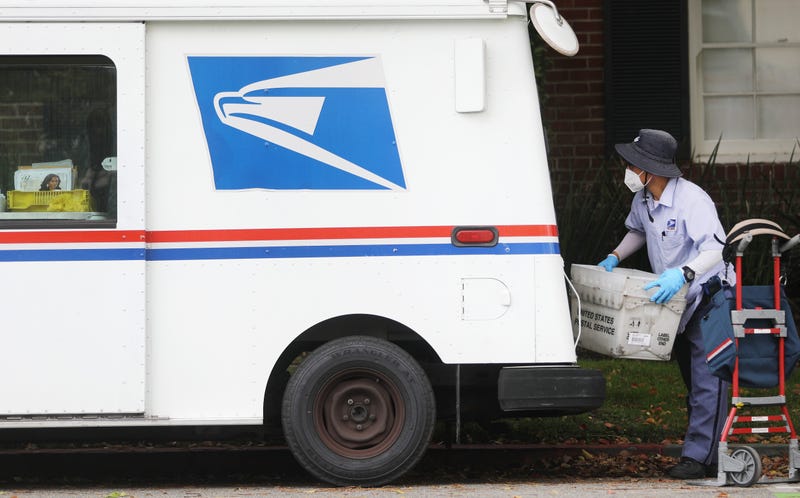 Department of Veterans Affairs Secretary Robert Wilkie is pushing back on reports that U.S. Postal Service delays have led to slowdowns for veterans' prescription deliveries. But internal emails show some delays are ongoing.

Wilkie brushed off reported delays as "conspiracy theories" he said were being used to "score political points against the Trump administration" in an Op-Ed published in the Washington Examiner on Tuesday.

But VA previously acknowledged delays to its staff, veteran service organizations and Congress, saying that the department had seen its prescriptions mailed by USPS delayed by about 25% in 2020 so far.

VA also told Congress it planned to mitigate those delays by sending prescriptions earlier, working with USPS to ensure those packages were prioritized, switching to alternative delivery services such as UPS and FedEx in some cases, and asking veterans to pick up prescriptions at department pharmacies. VA told lawmakers USPS delays may have been worse in some areas, such as New York, New Jersey, Arizona and Michigan. In emails to veterans, VA advised them to preorder refills for medications as soon as they receive their latest batch.

Internal communications at the department obtained by Connecting Vets show some slowdowns continue.

At one VA pharmacy in the southeast, internal emails said that more than 100 veterans had contacted VA to complain of delayed medications.

Some prescriptions were delayed two weeks or more, including antidepressants, anti-anxiety medications, medications to treat and prevent pain and seizures and more.

Some of those medications had to be replaced because of the delays, according to the emails.

"Increases in mailing time are resulting in breaks in therapy," staff said.

Pharmacy staff worried that some of the medications could be less effective after sitting in postal storage for weeks, other internal communications show.

One VA pharmacy had to replace about 100 prescriptions by either shipping them overnight or having patients pick them up -- not new methods for the department, but efforts staff said they had to switch to in cases when USPS deliveries did not arrive as expected.

About half of those were controlled substances that are highly regulated or were refrigerated medications that are normally shipped by USPS priority mail. They were mailed the second week of August and hadn't moved by the end of the month, with no information from USPS on where they were or when they'll be delivered.

Air Force veteran Gary Fowler told Connecting Vets his medication was shipped out on Aug. 5, and he didn't receive it until Sept. 1. When he first noticed the delay in August, Fowler said he contacted VA and was able to pick up the medication at a department pharmacy, a 45-minute drive away.

"They were unable to explain the delivery delay so they allowed me to pick it up at the outpatient pharmacy," Fowler said. "I was just prescribed another med and they were able to do the same thing so I didn’t have to deal with the delays again."

Fowler is just one of more than 200 veterans, caregivers and VA staff who began telling Connecting Vets of prescription delays in late July, delays ranging from a few days to weeks. Previously, many of those veterans and caregivers said they almost always received their VA prescriptions promptly within a few days. They provided documents showing those shipping delays, internal communications and more.

Wilkie argued that the reported delays, which he called "misinformation" could "cause harm to those who served this country" by casting doubt on VA's ability to reliably supply prescriptions by mail, which he said still average fewer than three days -- below the department's target of three to five days for deliveries.

"It’s only natural that some isolated problems will occur, given the volume of prescriptions we send in the mail," Wilkie wrote. "But when we see delays, we don’t sit back and accept them — we find solutions. VA staff continuously monitor our delivery times, and we shift to commercial carriers if USPS is experiencing problems in certain regions of the country ... Veterans should never be given reason to doubt a system that continues to work for them at a high level, year after year."

The vast majority of VA prescriptions are fulfilled by mail from a group of seven massive, automated hub pharmacies across the country, the Consolidated Mail Outpatient Pharmacy (CMOP) system. That centralized pharmacy system processes about 80% to 90% of all VA outpatient prescriptions and most (90%) of those are shipped through USPS. The other prescriptions are typically filled at local VA medical facilities.

USPS is one of the country's largest veteran employers, with nearly 100,000 veterans on staff (about 15% of the total USPS workforce). About 60% of the veterans working at USPS have a disability rating, the agency estimates.

Given the volume of mail-order prescriptions VA has, Press Secretary Christina Noel told Connecting Vets on Sept. 1 that "there are going to be isolated reports of delays" but, "the number of reports has not increased significantly during the pandemic." VA's use of in-person pharmacies or commercial carriers such as FedEx and UPS also have not increased significantly during the pandemic, Noel added.

As reports of USPS delays grew in August, some attributed them to changes made by new Postmaster General Louis DeJoy, who took over the service on June 15. DeJoy has been a top donor to President Donald Trump and issued a memo during his first month leading USPS announcing new policies, including that the Postal Service would now leave mail behind to ensure delivery trucks complete their routes on time.

House and Senate lawmakers -- both Democrat and Republican -- shared reports of delayed mail, including from veterans who had seen a slowdown in their mail-order prescriptions, during hearings on Capitol Hill where DeJoy was called to testify. DeJoy largely argued that the pandemic caused mail delays, not any decisions he made.

“There is no doubt the COVID-19 pandemic has challenged postal operations as it has so many aspects of our society," Moran wrote. "In light of the difficult environment, I urge you to remain mindful that ongoing management and operational reforms do not negatively impact important functions which VA and our veterans rely.”