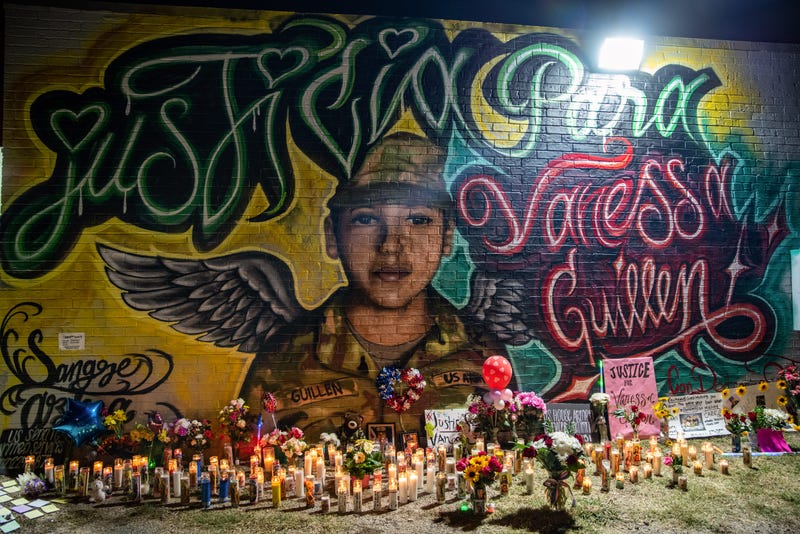 Air Force veteran Pam Campos-Palma is one of thousands of women veterans and service members who signed her name to a letter this week demanding justice for Spc. Vanessa Guillen whose remains were found more than two months after she was killed.

"We know the whisper network," Campos-Palma told Connecting Vets of the signees of the letter, some of whom have been advocating for women in the military for decades. "We're not only tired of the injustice but we're committed that this is it. This is the end. We're not going to play games anymore. We're going to really take stock of our power."

The letter the group published calls for a Congressional investigation into Guillen's disappearance, the resignation of every person in her chain of command at Fort Hood in Texas, the closure of Fort Hood, and a halt to all enlistments in the military until justice is served.

"For over two months, the disturbing circumstances surrounding Spc. Guillen’s disappearance and the environment of sexual harassment she endured in her unit prior to her murder have gripped the attention of various communities across the country and incited a resounding need for the utmost accountability and attention," the open letter reads.

The letter signees are far from alone. More than 90 members of Congress have now called for an investigation into what exactly happened at Fort Hood that led to Guillen's killing.

But Campos-Palma says Congress has always been part of the problem and just calling for change isn't enough this time.

"I've been on the Hill, I've been in those offices where they just want more stories, we need more recent stories, we need younger stories. We are saying we have given you enough stories for decades. You know what the problem is. You need to do something," Campos-Palma said. "It is on Congress. It is on those people on the Hill to stop giving us crumbs and make a genuine overhaul of the system."

In the meantime, women and people of color must abstain from enlistment, the letter circulated by women veterans says.

"The most painful stories that I've heard, and I'm tired of hearing the same stories, are young people, people of color, men included saying, 'There's nothing more I wanted to do than to serve my country in a way that was honorable. And I can't do that in a military that says that sexual violence and structural racism is an occupational hazard.' We continue to be treated as expendable and America's daughters and sons should not have to worry about the enemy being the very people that are supposed to protect them," Campos-Palma said.

The letter's requests to shut down Fort Hood and halt enlistment are aggressive -- but necessary, she said.

"The reality is it needs to be done. This is a moment in America that's not about what's possible. That line of thinking has failed us. Now it's about what is needed," Campos-Palma said. "There's no question that that base is a risk and a threat to the people on it and the community around it. It is a responsibility -- a duty -- that that base be shut down."

Secretary of Defense Mark Esper and Chairman of the Joint Chiefs of Staff Gen. Mark Milley both commented on Guillen's murder during a House Armed Services Committee hearing on Thursday.

"As the father of a daughter, that's just a nightmare," Milley said. "My heart bleeds for that family, and I can't even begin to imagine what they're going through. But I want them to know we're going to do everything in our power to make sure that doesn't happen again."

"We’ve got to continue to work at what is believed to be ... the underlying issue, and that was she was sexually harassed, if not assaulted, by the soldier in question," Esper told lawmakers. "That is something that continues to be a stain on the profession."

Esper said there has been "a lot of progress" made to end sexual harassment and assault in the military over the past 10 years, but admitted there is more work left to do.

"We need to get to zero tolerance of sexual harassment and sexual assault and we need to make sure that everybody in our ranks knows where they can go to for help, where they can find help," he said. "That is my commitment."

She was last seen on April 22 in the parking lot of her Regimental Engineer Squadron Headquarters, 3rd Cavalry Regiment. Her car keys, barracks' room key, ID and wallet were all found in the armory.

Aguilar, 22, was arrested July 1 and charged by civilian authorities on Thursday with one count of conspiracy to tamper with evidence in connection with Guillen's disappearance, according to a Justice Department statement about a criminal complaint.

A hearing is expected early next week. If convicted, Aguilar faces up to 20 years in prison and a maximum $250,000 fine.

"We can't comment on specifics because it is an ongoing investigation," Fort Hood CID Senior Special Agent Damon Phelps said.

Phelps said available video footage had been reviewed, but there was not video "of the incident" and no video in Guillen's unit. They said agencies had spent 10,000 hours investigating and conducted more than 300 interviews so far.

Phelps said two suspects -- Robinson and Aguilar -- have been identified so far, but no others. With Robinson's death, Phelps said "There is one person who will be prosecuted," but did not name Aguilar. They would only describe the relationship between Guillen and Robinson as "coworkers."

“Sooner or later the truth will come out because we are not going to stop,” said Guillen’s older sister, Myra, during. “We have to know everything.”

"They should be ashamed of themselves. Protocol was breached in every manner. We lost one of our own on our own base," Khawam said. "Everything we were given was lies. It was evasive. They were very disingenuous to us. I don't know who's covering up for who but it doesn't matter."

Anyone with information can contact Army CID Special Agents at 254-287-2722 or the Military Police Desk at 254-288-1170. They can also anonymously submit information at www.cid.army.mil/report-a-crime.html. People who want to remain anonymous "will be honored to the degree allowable under the law and the information will be held in the strictest confidence allowable," CID officials said.

Reach @AbbieRBennett or @ECBHowe.
Want to get more connected to the stories and resources Connecting Vets has to offer? Click here to sign up for our weekly newsletter.