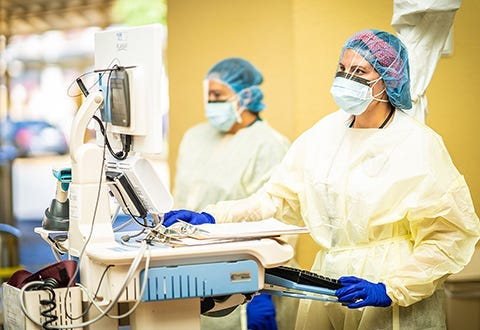 As the number of Department of Veterans Affairs patients sick from the coronavirus reaches record-high levels for more than two weeks straight, VA is also rolling out new vaccine trials and planning for massive vaccine distribution once approved.

The department recorded more than 11,000 active cases on Nov. 16, a record high, and was trending toward an even higher total by the afternoon of Nov. 17. From Nov. 2-16, VA recorded its highest levels of active cases since the pandemic began, starting at 6,459 on Nov. 2 and increasing each day.

The last peak in active cases at VA was on July 20, when the department recorded 6,424 cases.

The increase in active cases as of this week represents an about 80% increase from the beginning of this month. October began with 3,331 active cases and ended by recording more than 5,800. Active cases at VA have jumped more than 17% in the last seven days alone.

Active cases have more than doubled since this time last month and could triple if the trend continues. The vast majority of those active cases are veteran patients.

On Nov. 1, VA recorded 4,000 deaths from complications caused by the virus, and since then has added more than 400, putting the department on track to reach 700 deaths by the end of November, putting it near the top of the deadliest months of the pandemic for VA patients. In August, VA recorded 825 deaths, the highest so far, followed by more than 730 in May.

VA's overall mortality rate is about 4.8% is still more than double the about 2.2% mortality rate for Americans overall, according to the most recently available Centers for Disease Control and Prevention data, though both of those rates have fallen slightly from previous months.

About eight months since VA recorded its first veteran lost to the virus the department has averaged about 17 deaths per day, roughly equivalent to the rate of veteran suicide, according to VA data.

VA's mortality rate is influenced by the age and overall health of its patients, who tend to be older and less healthy than the overall American population. VA's data also includes its staff and some non-veteran patients the department treated as part of its Fourth Mission. As of Nov. 17, VA recorded 69 staff deaths, adding seven deaths so far this month.

"Trends in new cases generally reflect what is going on in the country and local communities," VA Press Secretary Christina Noel said this week.

The number of patients at the department who require hospitalization -- the statistic VA cites as the most reliable judge of how it's patients are faring amid the pandemic -- has consistently fallen since a height of 38% in March, to about 15% in October and now about 13% so far this month, VA Press Secretary Christina Noel said.

But the number of patients hospitalized also appears to be rising. In the latest of VA's weekly pandemic response reports for Nov. 10-16, the department recorded 855 COVID-19 inpatients, a more than doubling since October.

VA surpassed 90,000 total cases of the virus this week, adding about 15,000 so far in November. Of VA's more than 90,000 total cases, about 83% are considered convalescent, meaning they have either recovered or passed the 14-day mark since their last positive test, and that number has continued to fall as the number of active cases has increased.

The department's total case count now excedes the total number of cases confirmed in several states, such as Connecticut (87,218) and Idaho (71,359), according to CDC data. VA's total number of cases exceeds those recorded in more than 15 states. The department cares for a total of more than 9 million veterans, roughly half of the veterans in the United States, and has nearly 400,000 employees.

Some VA systems have sent out advisories asking veterans to abide by new, tightening COVID-19 restrictions in their states. In Alaska, amid record-breaking numbers of virus cases "raising concerns about the health and well-being of Alaskan veterans and our health system's capacity to treat them," the Alaska VA Healthcare System said it "strongly encourages all veterans to follow the guidelines that Gov. Dunleavy established this week to stop the spread."

"We understand that people are tired and frustrated," the Alaska VA system continued in its email to veterans this week. "But we must remain vigilant and prepared. We do not yet have a sure medical treatment to prevent or treat COVID_19 once a person is infected, so our best defense continues to be a good proactive offense."

Noel said each VA medical center is taking precautions and considering unique circumstances in its area as the facilities make decisions about what services to provide.

VA recorded 947,858 total COVID-19 tests administered nationwide during the pandemic as of Nov. 16 and has not updated that total publicly since then. That total number of tests does not reflect how many individual people have been tested at VA, but rather how many tests have been administered -- some people may receive multiple tests.

VA has tested more than 630,000 individual patients and employees for the virus, Noel said, about 66% of the total tests administered. Other tests were likely those administered to the same patient or staff member more than once so far during the pandemic.

In October, VA averaged more than 3,800 COVID-19 tests per day, lower than the September average of more than 4,700 per day.

Veterans can volunteer for the studies, but researchers are asking especially for frontline and essential workers as well as Black, Hispanic and Native American volunteers. Veterans can sign up to participate here.

VA is seeking those groups in particular at least in part because some veterans have been disproportionately affected by COVID-19. Results of a VA study of more than a quarter of a million veterans released late in late September showed that Black and Hispanic veterans were twice as likely as white veterans to test positive for the virus at VA, which researchers said indicated an "urgent need to proactively tailor strategies to contain and prevent further outbreaks in racial and ethnic minority communities.

Department data provided to Connecting Vets this summer showed Black and Hispanic veterans made up nearly half of all VA patients who tested positive for the coronavirus, though they only comprise about 23% of all department patients.

Those trends appear to reflect a disparity seen in the larger American population. A study recently released by Stanford and Duke University researchers found that Black and Hispanic patients accounted for more than half of in-hospital COVID-19 deaths.

VA is also working with federal partners to plan for massive vaccine distribution once a safe and effective vaccine is approved.

The department announced on Nov. 17 it is working with the CDC and other federal agencies to develop a vaccine plan "to ensure VA safely and equitably distributes vaccines once authorized."

The plan will follow a phased approach and "lessons learned from past pandemic vaccine plans," VA said in its announcement. The initial phase will be a limited supply, followed by a "general implementation phase" when VA said larger supplies of the vaccine will be available for veterans if they want to receive one.