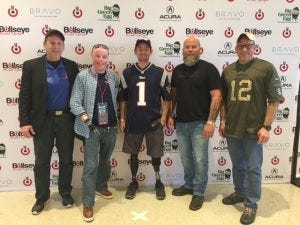 Marine Lance Cpl. Caleb Getscher was hit by an IED while serving in Afghanistan in 2011.

He’s also one of the thousands of service members who have attended a sporting event or concert thanks to Operation Warrior Wishes.

Getscher, a triple amputee, was among the first group of veterans that the nonprofit, started by father and son Craig and Matt Steichen, took to an NFL game free of charge in 2012.

“Those guys give us the opportunity to do what we do,” Matt said.

Operation Warrior Wishes began as a sort of experiment to see if the father and son duo, who live in suburban Chicago, could see a game in each NFL stadium around the country in a single season. Drawing up their battle plan when the league announced its 2012 schedule, they determined it could be done.

But they both realized that something was missing.

“My dad is really big on experiences, not stuff,” said Matt. “He always wanted me to give back.”

They soon came up with the idea of inviting wounded warriors as their guests to each game as a way to honor the service of Craig’s brother, Ken, who is a wounded warrior. On Sept. 5, 2012, the Steichens met Navy Petty Officer Damian Smith and Marine Gunnery Sgt. Chris Claude for a game in New York to officially kick off the effort.

As they traveled around the country on their own dime taking veterans to games, local and national news outlets soon picked up on the story. When former NFL coach and TV football analyst Mike Ditka heard about what the Steichens were doing, he sent them a check to help cover their costs. Corporations nationwide soon began supporting the effort with cash and donations of tickets to events.

“Not one of us gets paid a dime,” said Matt. “We pay our own way. Ninety-five percent of what we bring in goes back to our mission.” 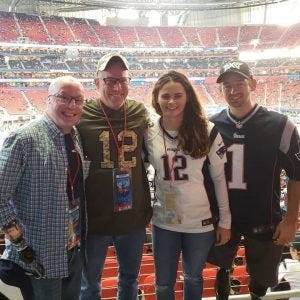 “It was never intended to go beyond one season,” said Craig.  “If you would have told me eight years ago that we’d still be doing this, I’d say you were crazy.”

The Steichens didn’t want to single out one veteran as being more memorable than another. Craig said they all have “incredible stories.”

Anyone who has served the nation is eligible to request a free ticket from Operation Warrior Wishes. Visit the organization’s website to nominate yourself or someone else to receive tickets.

Craig summed up the Operation Warrior Wishes experience in a few words.

“Humbling. Awesome. The traveling will kick your ass,” he said. “Its a way to give back.”