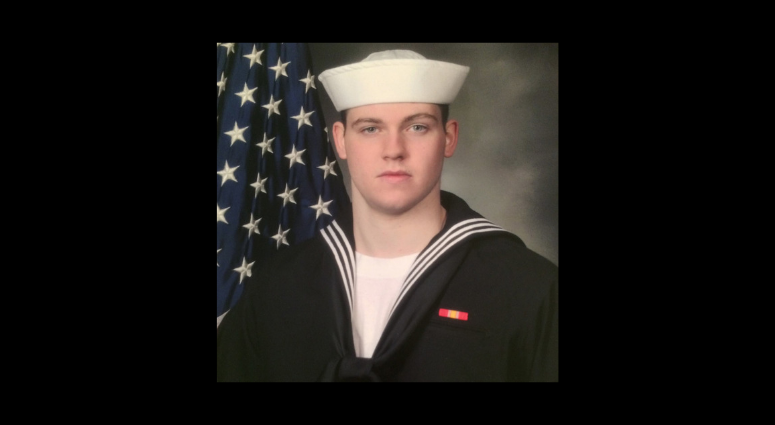 PALMYRA, Va. (NNS) -- A dedication ceremony was held at the post office in the small town of Palmyra, Virginia, March 23, to honor one of the seven U.S. Navy Sailors who lost their lives aboard the Arleigh Burke-class guided missile destroyer USS Fitzgerald (DDG 62) in the waters of Sagami Bay near the approaches to Tokyo Bay.

Families, friends, and citizens of Palmyra gathered outside of the city’s post office as it was renamed in tribute to Gunner’s Mate Seaman Dakota Kyle Rigsby, a Palmyra native.

Born Sept. 12, 1997, in Fort Polk, Louisiana, Rigsby grew up alongside his older brother, Trey Rigsby, his mother, Shawn Rigsby, and his father, Wayne Rigsby. In 1999, Rigsby moved to Palmyra, Virginia, where he attended the Fluvanna County High School.

“Growing up, Rigsby was fearless, caring and kindhearted,” said Wayne Rigsby, Dakota’s father. “He cared for everyone, even people he didn’t know. He really looked out for the little guys growing up.”

When Rigsby was not busy with high school classes or his favorite hobbies of sports, video games, and Pokémon, he could be found spending his free time volunteering at the Lake Monticello Volunteer Fire Department.

“Dakota joined our fire department when he was 16 years old as a junior member,” said Rich Constantino, fire chief of the Lake Monticello Fire Department. “Two years later when he was 18, he became a senior member. During his time volunteering, he helped with anything we had to do. He was a respectable young man who was able to learn quickly and always did as he was asked without any complaints.”

After graduating high school, Rigsby enlisted in the Navy as a Gunner’s Mate and

left for basic training at Great Lakes Naval Station in February 2016. Shortly after, Rigsby reported to ‘A school’ and then to his first ship, the Arleigh Burke-class guided-missile destroyer USS Fitzgerald (DDG 62), in Yokosuka, Japan.

“He had told me he always wanted to go see the world and the Navy was the best way for him to do that,” said Shawn Rigsby, Dakota’s mother. “He was my outgoing and energetic son who was always outspoken and never let anyone bully him or let anything get him down.”

As families and friends gathered under a national ensign hoisted up by a Lake Monticello Fire Department fire truck, they began to share their favorite memories of their time with him.

“I remember when we went to the Mayhem Festival and saw Avenged Sevenfold,” said step-mother Nikki Rigsby. “Avenged Sevenfold was my favorite band and it was his too, so it was just a very happy day for the both of us.”

His brother Trey also shared memories of time spent together.

“My favorite memory with him was being able to walk out with him for senior night for football,” said Trey. “I will never forget how cold it was when I walked out onto the field with him in my letterman jacket.”

The idea to dedicate Rigsby’s hometown post office in his honor came from Virginia Congressman Thomas A. Garrett Jr., who submitted Public Law 115–209 to Congress. The act was meant “to designate the facility of the United States Postal Service located at 13683 James Madison Highway in Palmyra, Virginia, as the ‘U.S. Navy Seaman Dakota Kyle Rigsby Post Office.’ ”

Rear Adm. Frank D. Whitworth III, National Security Agency, expressed the importance of the ceremony as he delivered remarks during the dedication.

“While driving the roads of Virginia today and in this wonderful town of Palmyra, and while witnessing Scouts, police, firefighters, and citizen leaders demonstrate this community's pure ethos of service, it became clear that Seaman Rigsby's legacy enters a new phase with this post office dedication - the legacy of inspiration,” said Whitworth. “There is no doubt that generations of young people will enter this building, see the plaque that bears Seaman Rigsby's name, learn about his life of service, and then be inspired to serve others, as well.  What a fitting and lasting tribute to an American hero."