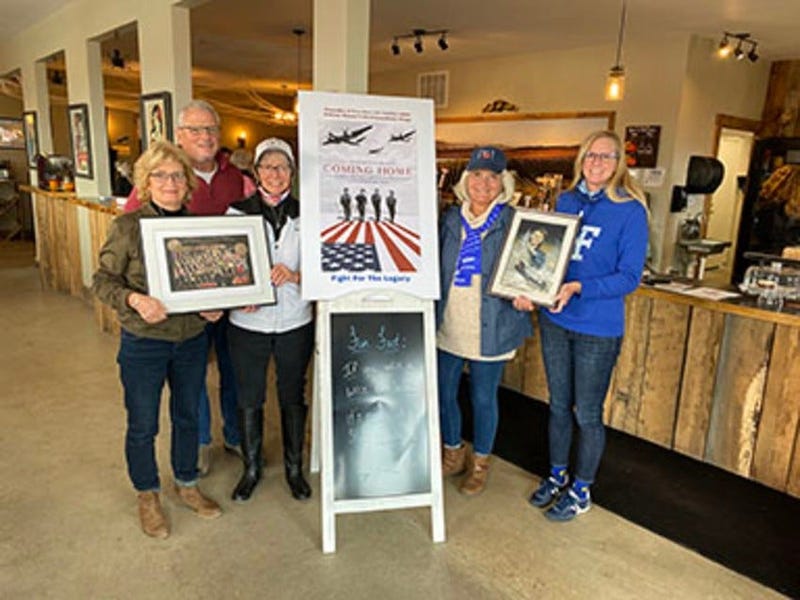 When Cathy Olszewski, Janice Holton, and Laurie Preston heard about the fundraiser for Coming Home: Fight for a Legacy, a documentary by Red Door Films about the Women’s Airforce Service Pilots of WWII (WASPs) being held at the B52 Winery in Paw Paw, Michigan, they knew that they needed to attend.

After all, their mom, Mildred Jane Baessler Doyle was one of 38 Michigan women who served as a WASP.

The daughters, along with Laurie’s husband Ken, came to the fundraiser, which was part of the Lucky Girl Brewing/B52 Winery Fall Festival, with photos, artwork, and lots of stories about their mom.

According to a release, they were greeted by Lucky Girl/B52 Winery owner Jeff Westcott and U.S. Marine Corps Pilot Lt. Col. Sarah Deal Burrows, organizer of the Coming Home fundraiser.

Westcott, a WWII history buff, has made the history and the legacy of the WASPs a centerpiece of B52 Winery. Visitors to the winery can learn about WASP history and purchase wines with labels honoring WASP aviation pioneers including 2019 Rosé | Sue, named after Suzanne Parish, co-founder of the Air Zoo Aerospace and Science Museum in Portage, Michigan.

Deal Burrows is helping Red Door Films raise funds so that they can complete their Coming Home documentary because of the role the WASPs played in inspiring her to complete her flight training and become the U.S. Marine Corps’ first female aviator in 1995.

“They were an inspiration to finish my training,” she explained. “Their courage was mind-blowing and even though they did not get recognition, they held their heads high. Their courage, their desire to help their country — I kind of felt like them, just in a different time.”

This winery designed a line of wines for WASPs

Only 1,074 women made it through rigorous training to become the first females to fly military aircraft. They often flew planes that their male counterparts refused to fly because they were deemed too dangerous.

“These pioneering female aviators flew over 60 million miles and ferried every type of military aircraft to the war front,” the release reads. “Thirty-eight members lost their lives and one disappeared while on a ferry mission, her fate still unknown.” 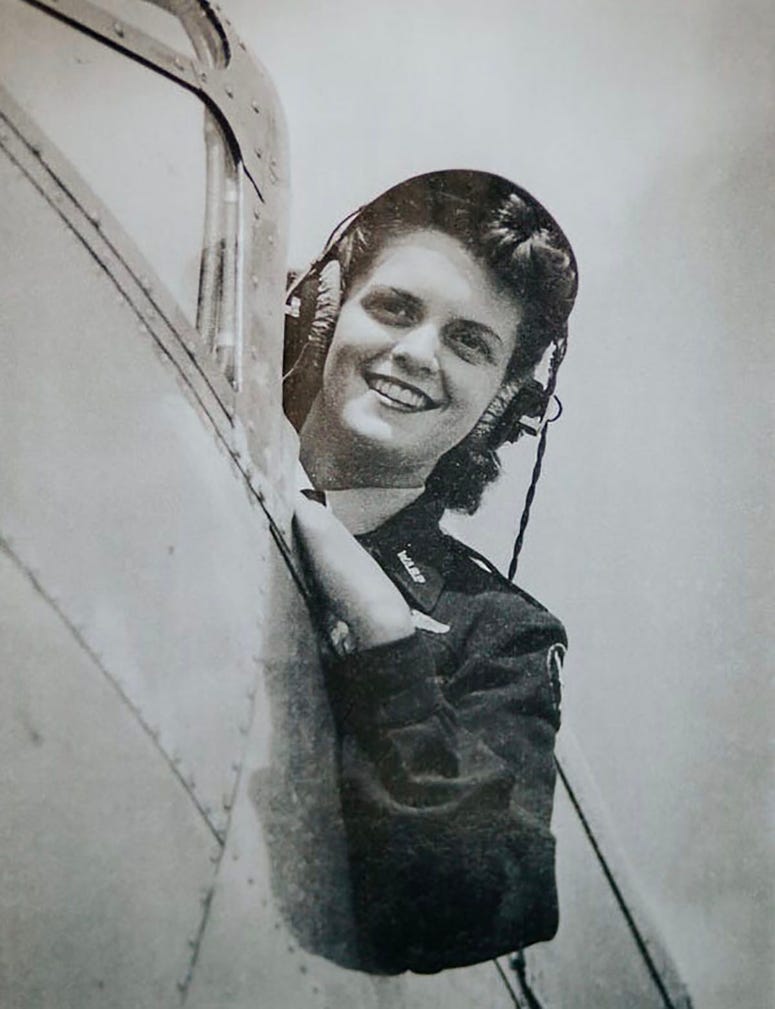 Two years into the program, Congress suddenly disbanded it, denying the women all military benefits. In 1977, for their WWII service, the members were granted veteran status, and in 2009 they were awarded the Congressional Gold Medal.

Meet the `best-kept secret of World War II’ -- the WASP

Doyle was one of these heroic WASPs.  In 1939, as a student at Grand Rapids Junior College, she was one of the few women accepted into the Civilian Pilot Training Program. By the fall of 1940, Doyle was enrolled at the University of Michigan in Ann Arbor, flying with the Civil Air Patrol to keep her pilot's license.

Recruited for the WASPs by founder Jacqueline Cochran, Doyle completed her training at Avenger Field in Sweetwater, Texas, She served as a WASP from 1942-44. The WASPs knew how to pilot 778 types of aircraft. Doyle’s favorite was the AT6.

Cathy, Janice, and Laurie didn’t know about their mom’s service as a WASP when they were growing up. They were adults in 1975 and 1976 when their mom asked them to help circulate the petitions which resulted in the WASPs finally getting military veteran status. The daughters learned even more about their mom and the WASPs when they began accompanying her to reunions that were held at the National WASP WWII Museum at Avenger Field in Sweetwater.

“The very first time I paid much attention to the WASPs was when I went to one of their homecomings in 2008,” said Laurie in the release. “It was a huge event and that’s when I realized what these women did. I really learned the story more from then on because I would take her to speaking engagements. The more I went the more I learned about it.”

The speaking engagements began after Doyle, along with over 200 other surviving WASPs and the families of deceased WASPs, attended the March 11, 2010 ceremony where they received the Congressional Gold Medal. The whole family attended that celebration.

“I felt proud, very proud,” said Laurie. “To have this honor finally given to this group of women was inspiring. Several of the grandchildren went. My children went. I felt that they had to see it to understand the magnitude of it. They had heard about it, but to be in the capitol, the recognition really impressed the fact on them.”

The last 10 years of Doyle’s life were filled with speaking engagements and air shows. She would be the guest of honor at those shows and she loved going because she knew she could always hitch a ride in one of the planes.

“She loved the fast ones,” said Cathy. “They would let her take over the controls. And she loved doing the rolls. She enjoyed it.”