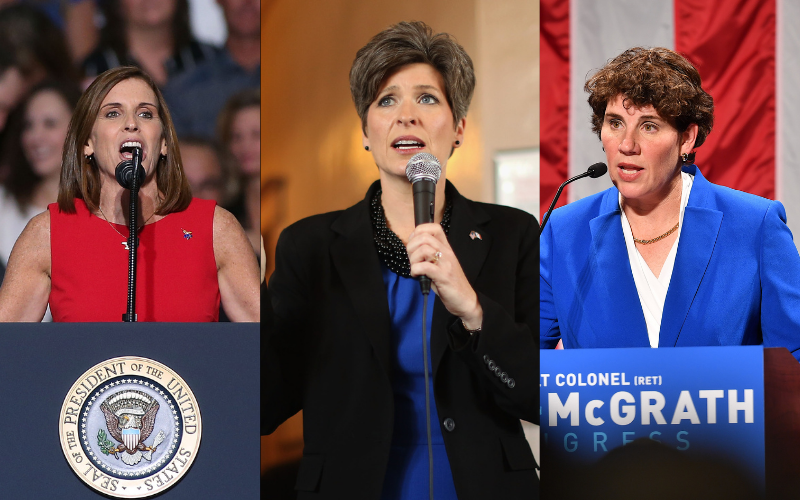 Women veterans are poised to play a pivotal role in this year's Congressional elections, with 28 running for federal office including in major races that could determine the Senate majority.

The 2019-20 session of Congress saw the most women veterans in Congress in United States history with seven. Now, 24 are running for House seats and four for the Senate, a major increase over prior years.

At least two of those Senate races are among the most competitive, with two Republican incumbents facing major challenges.

Sen. Joni Ernst, R-Iowa, a former Army Reserve and Iowa National Guard lieutenant colonel with 23 years of service is running against Democrat Theresa Greenfield, who has not served in the military. Ernst is the first woman to represent her state in Congress and the first woman combat veteran elected to the Senate in United States history.

Ernst has sponsored legislation to provide hazardous duty pay to service members responding to the pandemic, combat sexual assault and harassment in the service and Department of Veterans Affairs, modernize female body armor, create a Global War on Terrorism memorial, investigate VA doctors with revoked licenses, protect veterans from "pension poachers," create a technology partnership between VA and the Energy Department and more.

Previously, Ernst revealed that she was raped in college and abused by her ex-husband, which she said prompted her to work toward justice for other survivors.

Sen. Martha McSally, R-Arizona, a former Air Force colonel and fighter pilot with 22 years of service, faces a challenge from Democrat Mark Kelly, a former Navy captain and pilot who was also a NASA astronaut. McSally previously served in the House and was unsuccessful in a bid to represent her state in the Senate in 2018. But when Jon Kyl resigned from his seat after being appointed a successor for the late John McCain, Arizona Gov. Doug Ducey appointed McSally to replace Kyl in her current role. This year's election constitutes a special election for the Arizona Senate seat since McSally was not elected for her current term.

McSally is the second woman to serve in the Senate after Kirsten Sinema, who she ran against in 2018. She was also the first female fighter pilot to fly in combat.

In early 2019, McSally revealed that she was raped by a superior officer while serving in the Air Force, which, like Ernst, propelled her to work toward change for fellow survivors.

Amy McGrath, a former Marine fighter pilot with 20 years of service and the first woman to fly combat missions for the Corps, is hoping to unseat Senate Majority Leader Mitch McConnell, R-Kentucky, who has served in the Senate for 36 years and has significant power and influence in Congress. McConnell received a draft deferment for law school and later enlisted in the Army Reserve in 1967, a group typically kept out of combat during Vietnam, but was deemed medically unfit for service and discharged five weeks later.

The fourth woman veteran running for Senate office is M.J. Hegar, a former Army major, also a pilot, who is challenging John Cornyn, R-Texas, a previous Senate Majority whip who has served in the Senate for 18 years. Cornyn has no military service, but his father was an Air Force colonel.

Hegar, who flew search and rescue missions during multiple tours in Afghanistan and was shot down and wounded in 2009, successfully sued the Air Force in 2012 to remove the Combat Exclusion Policy.

Jackie Gordon, a former Army lieutenant colonel with 29 years of service is the Democrat candidate running to replace Rep. Peter King, R-New York, who is retiring. Gordon, who was born in Jamaica, served in Operation Desert Storm, at Guantanamo Bay and in both Iraq and Afghanistan.

Gina Ortiz Jones, a former Air Force captain and veteran of the Iraq War where she served as an intelligence officer, is the Democrat candidate running to replace Rep. Will Hurd, R-Texas, who defeated her in the 2018 election. Ortiz Jones is a lesbian and served under "Don't Ask Don't Tell" during her time in the Air Force.

Navy veteran Pam Keith is the Democrat challenger facing Rep. Brian Mast, R-Florida, a former Army explosive ordnance disposal technician and double-amputee from wounds he experienced after the explosion of an improvised explosive device in Afghanistan.

Mia Mason, a 20-year Navy and Army veteran is the Democrat candidate running against Rep. Andy Harris, R-Maryland, who is a former Navy lieutenant commander and Reserve officer who served in Desert Storm. According to her campaign website, Mason was discharged from the military "because of her LGBT status" but was later allowed to return to service.

Carla Spalding is a Navy veteran, VA nurse and first-generation Jamaican immigrant running as the Republican candidate against Debbie Wasserman Schultz, D-Florida, who currently serves as chairwoman of the House Appropriations Subcommittee on Military Construction and Veterans Affairs.

Blair Walsingham, an Air Force veteran, is the Democrat candidate running in the race to decide who will replace current House Veterans Affairs ranking member Phil Roe, R-Tennessee, who is retiring.

Other women veterans running for Congress in the 2020 election include: