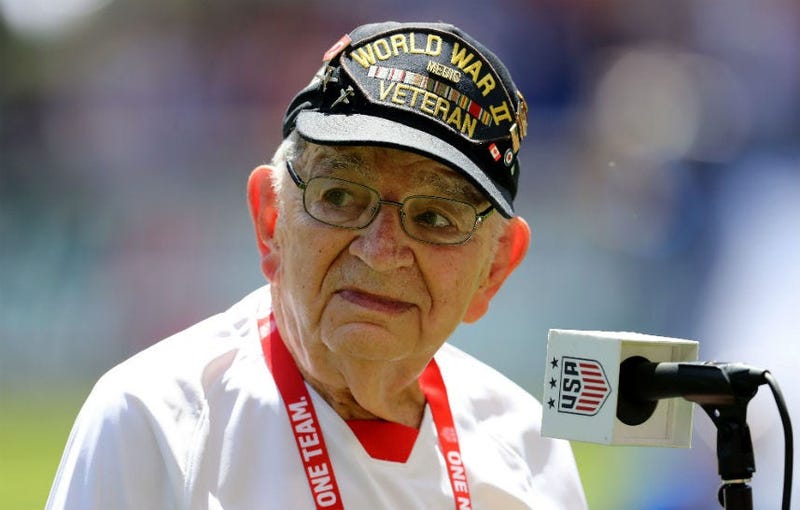 The U.S Women's National Team had plenty of motivation going into the final against the Netherlands. But just in case any of the 23 women squad was lacking extra verve, 96-year-old U.S. Army veteran Pete DuPre was there to give them a boost.

DuPre, who served during World War II, wanted to give the women "an idea of where my mind is" before the game and showed off his U.S. soccer gear. Despite being unable to attend the FIFA Women's World Cup Final in Lyon, DuPre said he would be rooting them on: "I'll be watching your victory, and saluting you with a bit of wine."

DuPre then gave the women a quick salute on his harmonica.

Our buddy Pete. Always has our backs.

"And I think the words I used when I wished you well the last time were, 'Give them hell.' So I say the same thing again," DuPre said.

On Memorial Day weekend, the 96-year-old World War II veteran known as “Harmonica Pete" dazzled American fans and players with his rendition of "The Star-Spangled Banner" before the team's final pre-World Cup tune-up game in New Jersey against Mexico.

DuPre was no stranger to the American players when he performed. Earlier this year when the USWNT visited Normandy while playing in France, DuPre and other veterans joined them to share their experience and talk about their service.

"It was the most humbling thing I think I've ever been a part of," U.S. midfielder Carli Lloyd said of the visit. "They've literally saved the world. And to hear their stories, what they went through, and how they're now sharing those stories, after so many years. I don't think any of us really get the real feel of what they went through."

We also met Frank Devita, who served with the U.S. Navy during the Normandy and Southern France campaigns. He crewed a Higgins landing craft which made numerous landings on Omaha Beach on June 6, 1944 and on the southern beaches of St. Tropez. pic.twitter.com/VdaFJP8SDW

DuPre and fellow WWII veteran Steve Melnikoff were able to link back up with the American women during the World Cup for lunch before the team's final match of the group stage (a 2-0 win over Sweden) in Le Havre.

Our friends Pete DuPre and Steve Melnikoff came to visit and we just love them so much. pic.twitter.com/vhETxXgpne

DuPre signed off his pre-game video message to the team by saying nothing would stop him from celebrating their victory: "And I'll be grinning and laughing and jumping around tomorrow, even though my hip is lousy."

"My thanks, (for) this old soldier you have made quite happy."