While no man who stormed the beaches in Normandy on June 6, 1944 lacked courage, 13 of them displayed heroic actions so significant that they would later be recognized with a Medal of Honor. 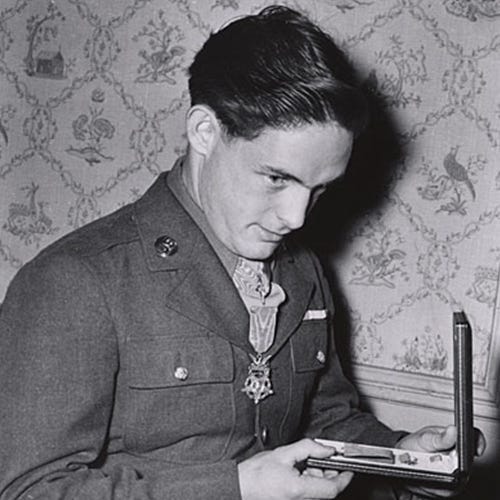 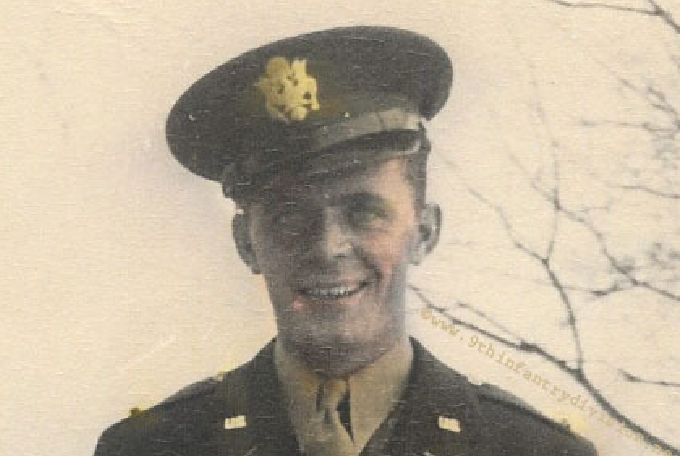 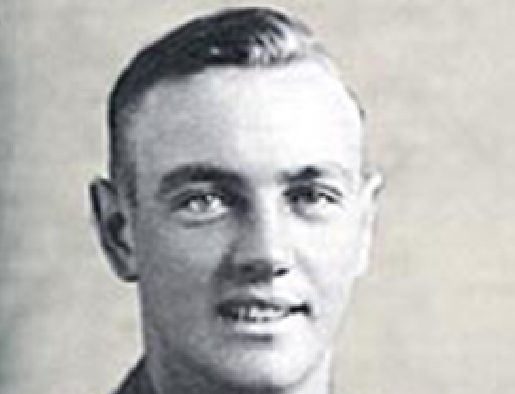 Scorning a concentration of enemy automatic weapons and rifle fire, he walked from the ditch onto the road in full view of the Germans, and sprayed the hostile positions with assault fire. He was wounded, but he continued firing. Struck again, he started to fall; and yet his grim determination and valiant fighting spirit could not be broken. Kneeling in the roadway, weakened by his grievous wounds, he leveled his heavy weapon against the enemy and fired burst after burst until killed outright. He was successful in drawing the enemy action away from his fellow soldiers, who continued the fight from a more advantageous position and established the first bridgehead over the Merderet. In the area where he made his intrepid stand his comrades later found the ground strewn with dead Germans and many machineguns and automatic weapons which he had knocked out of action. Pfc. DeGlopper's gallant sacrifice and unflinching heroism while facing unsurmountable odds were in great measure responsible for a highly important tactical victory in the Normandy Campaign. 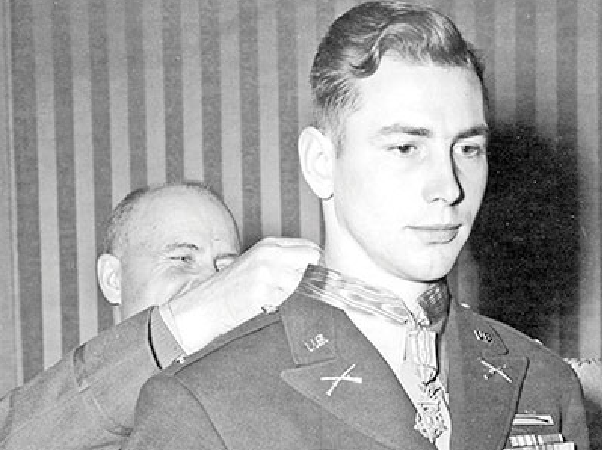 Without waiting for an order, S/Sgt. Ehlers, far ahead of his men, led his squad against a strongly defended enemy strong point, personally killing 4 of an enemy patrol who attacked him en route. Then crawling forward under withering machinegun fire, he pounced upon the guncrew and put it out of action. Turning his attention to 2 mortars protected by the crossfire of 2 machineguns, S/Sgt. Ehlers led his men through this hail of bullets to kill or put to flight the enemy of the mortar section, killing 3 men himself. After mopping up the mortar positions, he again advanced on a machinegun, his progress effectively covered by his squad. When he was almost on top of the gun he leaped to his feet and, although greatly outnumbered, he knocked out the position single-handed.

The next day, having advanced deep into enemy territory, the platoon of which S/Sgt. Ehlers was a member, finding itself in an untenable position as the enemy brought increased mortar, machinegun, and small arms fire to bear on it, was ordered to withdraw. S/Sgt. Ehlers, after his squad had covered the withdrawal of the remainder of the platoon, stood up and by continuous fire at the semicircle of enemy placements, diverted the bulk of the heavy hostile fire on himself, thus permitting the members of his own squad to withdraw. At this point, though wounded himself, he carried his wounded automatic rifleman to safety and then returned fearlessly over the shell-swept field to retrieve the automatic rifle which he was unable to carry previously. After having his wound treated, he refused to be evacuated, and returned to lead his squad. The intrepid leadership, indomitable courage, and fearless aggressiveness displayed by S/Sgt. Ehlers in the face of overwhelming enemy forces serve as an inspiration to others.

ROBERT G. COLE, LIEUTENANT COLONEL, U.S. ARMY, 101ST AIRBORNE DIVISION
With utter disregard for his own safety and completely ignoring the enemy fire, Lt. Col. Cole rose to his feet in front of his battalion and with drawn pistol shouted to his men to follow him in the assault. Catching up a fallen man's rifle and bayonet, he charged on and led the remnants of his battalion across the bullet-swept open ground and into the enemy position. His heroic and valiant action in so inspiring his men resulted in the complete establishment of our bridgehead across the Douve River. The cool fearlessness, personal bravery, and outstanding leadership displayed by Lt. Col. Cole reflect great credit upon himself and are worthy of the highest praise in the military service. 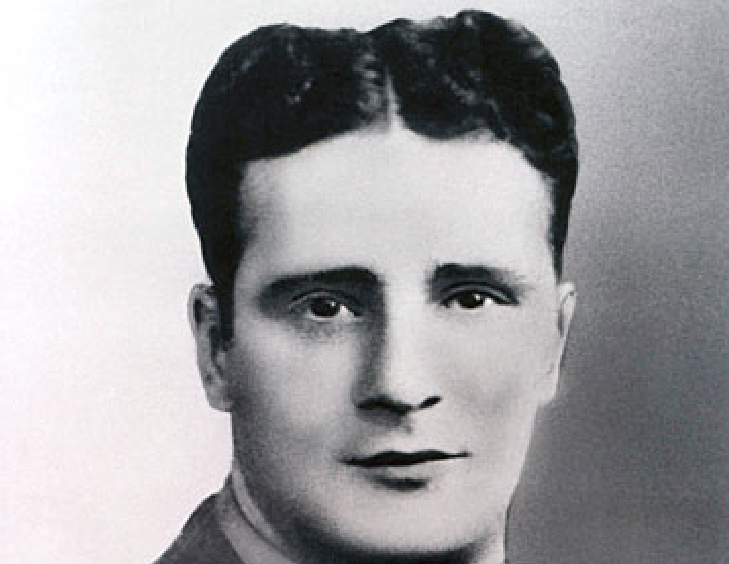 When his company came up behind him, S/Sgt. DeFranzo, despite his many severe wounds, suddenly raised himself and once more moved forward in the lead of his men until he was again hit by enemy fire. In a final gesture of indomitable courage, he threw several grenades at the enemy machinegun position and completely destroyed the gun. In this action, S/Sgt. DeFranzo lost his life, but by bearing the brunt of the enemy fire in leading the attack, he prevented a delay in the assault which would have been of considerable benefit to the foe, and he made possible his company's advance with a minimum of casualties.

JOHN D. KELLY, TECHNICAL SERGEANT (THEN CORPORAL), U.S. ARMY, COMPANY E, 314TH INFANTRY, 79TH INFANTRY DIVISION
When Cpl. Kelly's unit was pinned down by heavy enemy machinegun fire emanating from a deeply entrenched strongpoint on the slope leading up to the fort, Cpl. Kelly volunteered to attempt to neutralize the strongpoint. Arming himself with a pole charge about 10 feet long and with 15 pounds of explosive affixed, he climbed the slope under a withering blast of machinegun fire and placed the charge at the strongpoint's base. The subsequent blast was ineffective, and again, alone and unhesitatingly, he braved the slope to repeat the operation. This second blast blew off the ends of the enemy guns. Cpl. Kelly then climbed the slope a third time to place a pole charge at the strongpoint's rear entrance. When this had been blown open he hurled hand grenades inside the position, forcing survivors of the enemy guncrews to come out and surrender The gallantry, tenacity of purpose, and utter disregard for personal safety displayed by Cpl. Kelly were an incentive to his comrades and worthy of emulation by all. 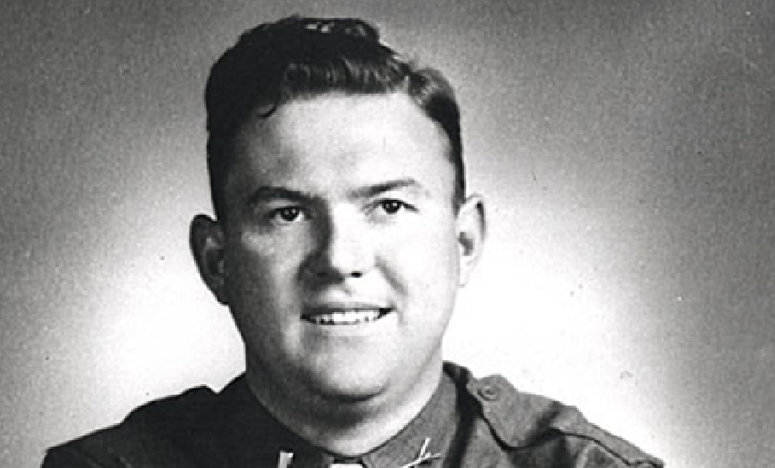 Under his direction several enemy positions were destroyed. He then rejoined his company and under his leadership his men captured an advantageous position on the hill. Supervising the defense of his newly won position against repeated vicious counterattacks, he continued to ignore his own personal safety, repeatedly crossing the 200 or 300 yards of open terrain under heavy fire to strengthen links in his defensive chain. When the enemy succeeded in completely surrounding 1st Lt. Monteith and his unit and while leading the fight out of the situation, 1st Lt. Monteith was killed by enemy fire. 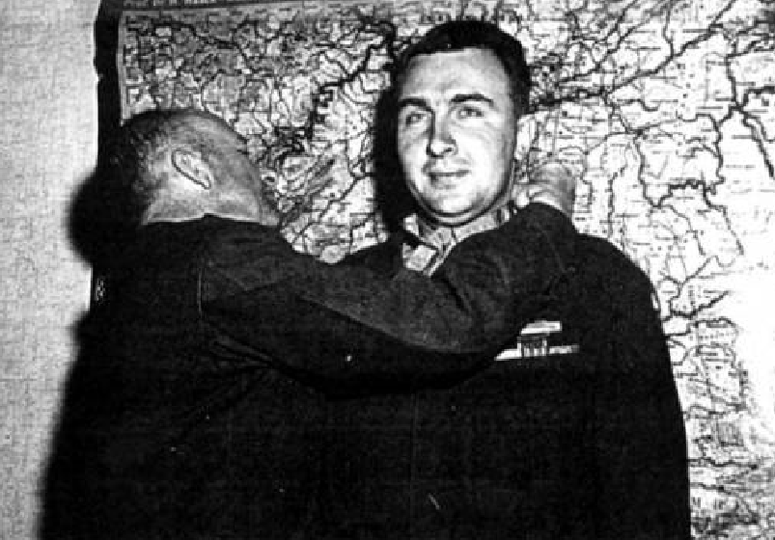 1st Lt. Ogden's company was pinned down by fire from a German 88-mm. gun and 2 machineguns. Arming himself with an M-1 rifle, a grenade launcher, and a number of rifle and handgrenades, he left his company in position and advanced alone, under fire, up the slope toward the enemy emplacements. Struck on the head and knocked down by a glancing machinegun bullet, 1st Lt. Ogden, in spite of his painful wound and enemy fire from close range, continued up the hill. Reaching a vantage point, he silenced the 88mm. gun with a well-placed rifle grenade and then, with handgrenades, knocked out the 2 machineguns, again being painfully wounded. 1st Lt. Ogden's heroic leadership and indomitable courage in alone silencing these enemy weapons inspired his men to greater effort and cleared the way for the company to continue the advance and reach its objectives.

FRANK D. PEREGORY
After numerous attempts to neutralize the enemy position by supporting artillery and tank fire had proved ineffective, T/Sgt. Peregory, on his own initiative, advanced up the hill under withering fire, and worked his way to the crest where he discovered an entrenchment leading to the main enemy fortifications 200 yards away. Without hesitating, he leaped into the trench and moved toward the emplacement. Encountering a squad of enemy riflemen, he fearlessly attacked them with handgrenades and bayonet, killed 8 and forced 3 to surrender. Continuing along the trench, he single-handedly forced the surrender of 32 more riflemen, captured the machine gunners, and opened the way for the leading elements of the battalion to advance and secure its objective. The extraordinary gallantry and aggressiveness displayed by T/Sgt. Peregory are exemplary of the highest tradition of the armed forces. 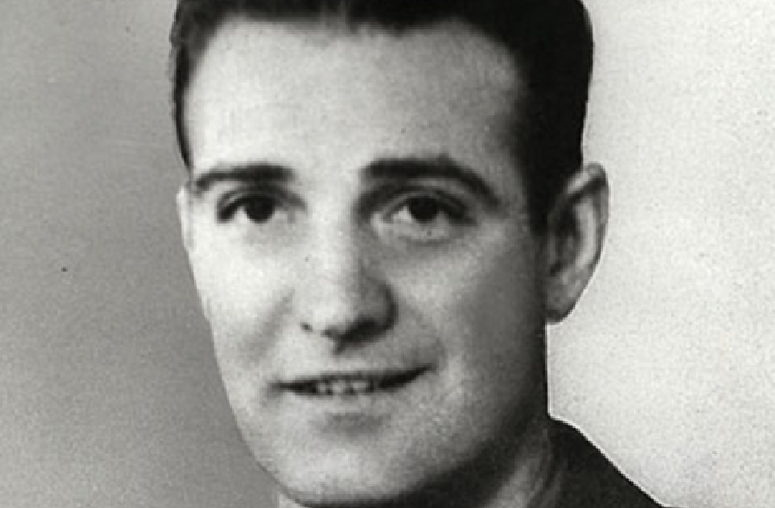 On D-day, Technician 5th Grade Pinder landed on the coast 100 yards off shore under devastating enemy machinegun and artillery fire which caused severe casualties among the boatload. Carrying a vitally important radio, he struggled towards shore in waist-deep water. Only a few yards from his craft he was hit by enemy fire and was gravely wounded. Technician 5th Grade Pinder never stopped. He made shore and delivered the radio. Refusing to take cover afforded, or to accept medical attention for his wounds, Technician 5th Grade Pinder, though terribly weakened by loss of blood and in fierce pain, on 3 occasions went into the fire-swept surf to salvage communication equipment. He recovered many vital parts and equipment, including another workable radio. On the 3rd trip he was again hit, suffering machinegun bullet wounds in the legs. Still this valiant soldier would not stop for rest or medical attention. Remaining exposed to heavy enemy fire, growing steadily weaker, he aided in establishing the vital radio communication on the beach. While so engaged this dauntless soldier was hit for the third time and killed. The indomitable courage and personal bravery of Technician 5th Grade Pinder was a magnificent inspiration to the men with whom he served.

After 2 verbal requests to accompany the leading assault elements in the Normandy invasion had been denied, Brig. Gen. Roosevelt's written request for this mission was approved and he landed with the first wave of the forces assaulting the enemy-held beaches. He repeatedly led groups from the beach, over the seawall and established them inland. His valor, courage, and presence in the very front of the attack and his complete unconcern at being under heavy fire inspired the troops to heights of enthusiasm and self-sacrifice. Although the enemy had the beach under constant direct fire, Brig. Gen. Roosevelt moved from one locality to another, rallying men around him, directed and personally led them against the enemy. Under his seasoned, precise, calm, and unfaltering leadership, assault troops reduced beach strong points and rapidly moved inland with minimum casualties. He thus contributed substantially to the successful establishment of the beachhead in France.

JOE GANDARA, PRIVATE, U.S. ARMY
Private Gandara’s detachment came under devastating enemy fire from a strong German force, pinning the men to the ground for a period of four hours. Private Gandara voluntarily advanced alone toward the enemy position. Firing his machinegun from his hip as he moved forward, he destroyed three hostile machineguns before he was fatally wounded. Private Gandara’s extraordinary heroism and selflessness at the cost of his own life, above and beyond the call of duty, are in keeping with the highest traditions of military service and reflect great credit upon himself, his unit and the United States Army. 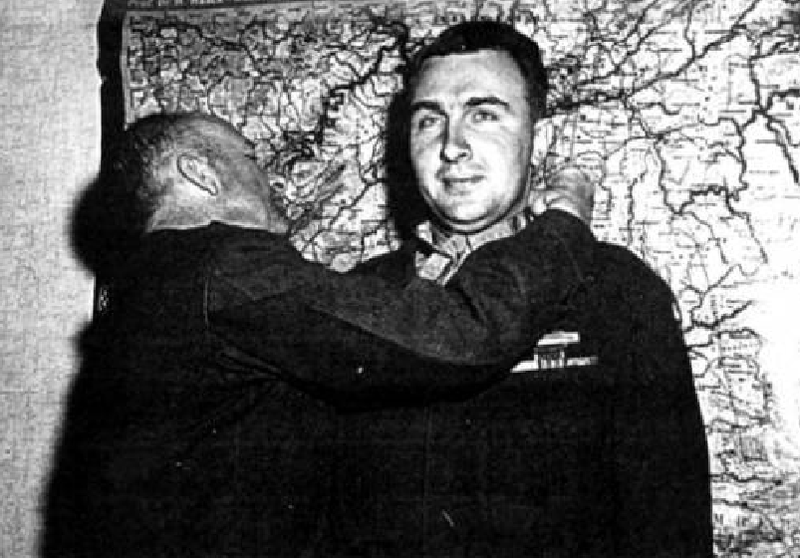 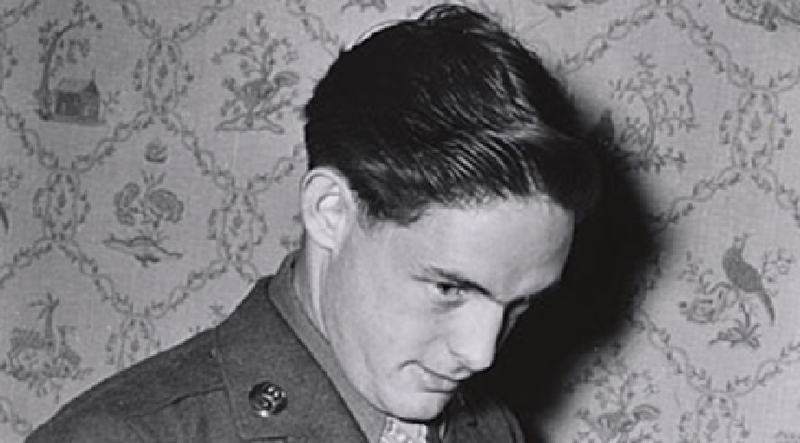 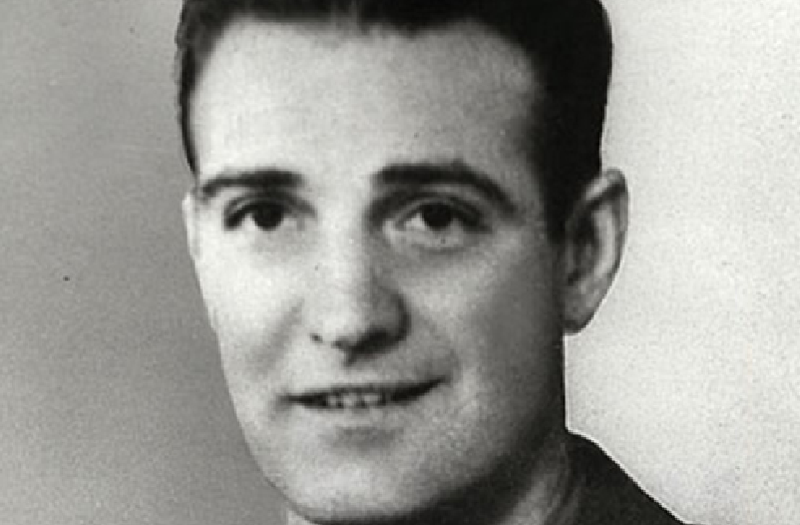 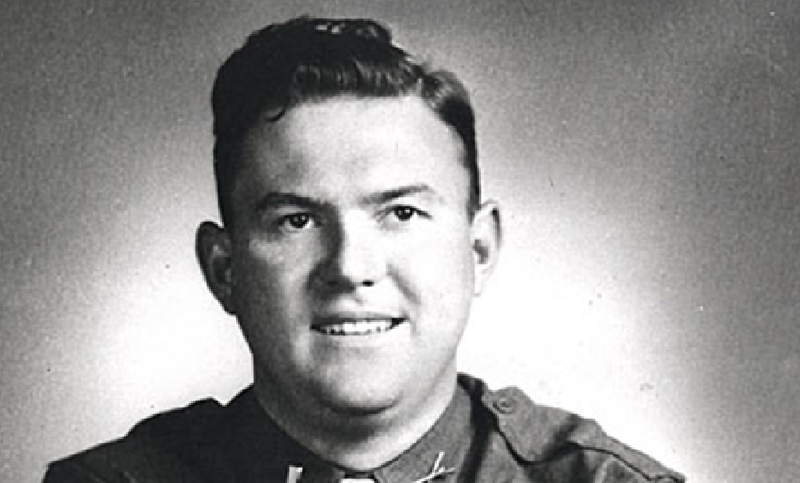