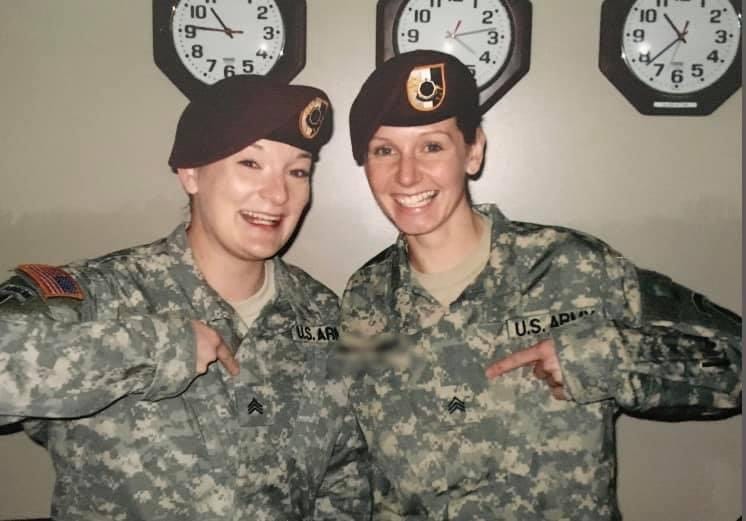 Photo credit Courtesy of Sisters a Arms
By Jack Murphy

Jo and Diann met in the Army as Psychological Operations (PSYOP) specialists under some challenging circumstances. Jo was a recent college graduate who felt introverted but compelled to serve in the military. Diann was married to a Marine and her home life was not great.

"It was a situation that I would not have survived if I didn't have people who cared enough to stand up and make sure that I was okay," she said. "I was able to escape a really dangerous situation."

Diann credits her unit, her Non-Commissioned Officers, and especially Jo for taking care of her during that time.

With Diann about to be deployed, Child Protective Services were about to take her children. Jo stepped in and took care of the kids until Diann returned from deployment, a measure their chain of command supported. It was a tough situation, but that was how Jo and Diann became besties.

"The work that we did there was not really stuff that I can talk about but I felt like having my crash course in Arabic and then creating these products to allow people to safely interact with the US military so we would have less civilian casualties felt really good to me," Diann said about deploying and doing her job.

Yet, there is a lot of confusion, not just amongst the public, but within the military itself as to what PSYOP really is.

"The elevator pitch is that PYSOP is getting other people to do what you want them to do while thinking it is their idea to do it," Jo said.

"Sometimes it is making terrorists cry," Diann laughed. "But that sounds really negative and awful."

The year of training to get into PSYOPs included not just their job training but also jump school, and today the Survival, Escape, Resistance, and Evasion (SERE) course.

Jo and Diann met during their Advanced Individual Training (AIT) and were deployed to Iraq at the same time, but to different parts of the country. There they participated in the entire process of crafting messages and distributing them to the Iraqi public. Sometimes this included pamphlet drops but there were other ways they attempted to disseminate messages to influence the population.

"We had a whole series of poetry slams," Jo said. "Poetry is a huge thing in Middle Eastern culture. The biggest poets in the country are super respected, like Rock stars here." She helped set up concerts for them in Northern Iraq.

Jo's Army career got sidelined after a parachute accident. Today, she practices law as a public defender. Diann changed jobs in the Army to spend more time with her kids and is now a career counselor, and will soon be promoted to E-8.

Together, they have started the Sisters at Arms podcast that highlights female military veterans. To get it started, they tapped into their PSYOP friends who built the website and logo for them.

The two PSYOP veterans felt that female veterans are largely invisible in society.

"Our whole goal is to tell stories of women veterans throughout history. The first part of the podcast we tell the story of a woman veteran and then highlight a charity," Jo said. Many of the charities are focused on women veteran's issues.

More information about Sisters at Arms can be found at: https://sistersinarmspodcast.com/