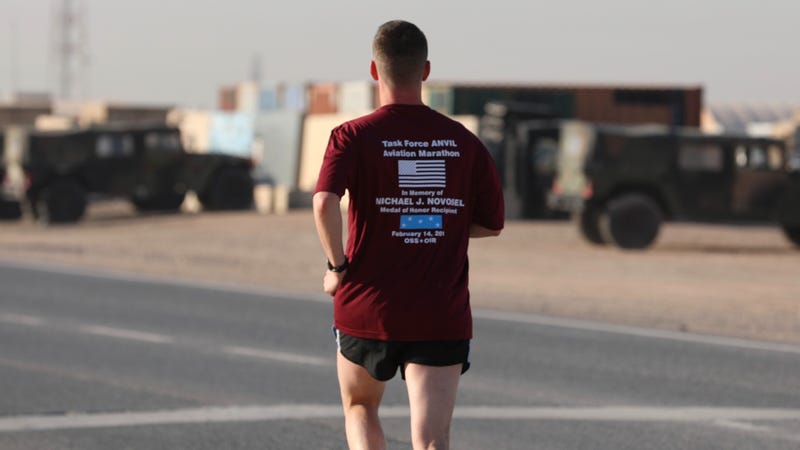 Although deployed to the Middle East, Soldiers are still finding ways to stay active, even dedicating a couple hours on Sunday to run in memory of a decorated Army aviator.

About 120 Soldiers with the 28th Expeditionary Combat Aviation Brigade participated in a marathon and half-marathon throughout their area of operations. The main event was held at Camp Buehring, Kuwait but runners at other bases and outposts participated virtually.

They raced in memory of Michael J. Novosel, Sr., a native of Etna, Pennsylvania, who served for over 40 years as an Army aviator and received the Medal of Honor for rescuing 29 Soldiers during the Vietnam War. He served two tours in Vietnam where he flew 2,543 missions in the UH-1 Huey and nearly 5,600 medical evacuees.

Novosel’s son, Michael Jr., also was an Army aviator and volunteered to serve with his father in Vietnam. After his father’s death in 2006, Michael Jr. made appearances on his behalf and established the Michael J. Novosel Foundation which aims to help troops navigate gaps in Veterans Affairs benefits and with their transition to civilian life.

“The marathon was initiated to provide our Soldiers a mid-tour event that would keep their motivation and physical endurance high,” said Lt. Col. Michael Girvin, executive officer for the 28th ECAB and head organizer of the race. “What better way to celebrate Valentine's Day with a little grit and determination while away from our loved ones and to remember the sacrifices of Michael J. Novosel.”

The top finisher in the marathon was Capt. Sam DeBold, support operations officer with Headquarters Support Company, 628th Aviation Support Battalion. DeBold ran at Camp Buehring and completed the marathon with a time of 3:37:59.

Many Soldiers also supported the race by manning medical points, passing out water and Gatorade, keeping time and encouraging runners along the route as they passed by.

“Throughout our area of operations, where we had both large and small outposts, our junior officers and NCOs stepped up to coordinate medical and logistic support,” said Girvin.