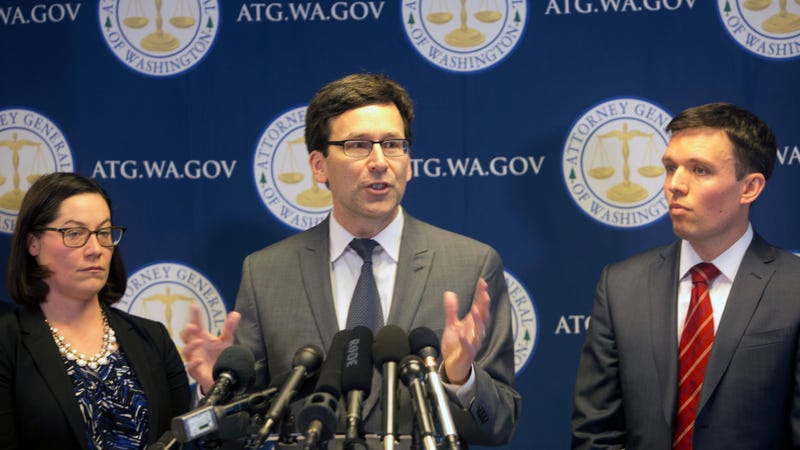 File photo of Washington State Attorney General Bob Ferguson, whose office filed a lawsuit against Veterans Independent Enterprises for failingto pay workers for weeks at a time in 2018 and 2019. Photo credit Karen Ducey/Getty Images
By The Associated Press

The Washington state attorney general’s office has reached a settlement in a lawsuit that calls for back pay totaling $1 million for about 100 veterans once employed by a charity organization serving homeless vets.

Court documents said the employees of the Veterans Independent Enterprises of Washington went without pay for weeks at a time in 2018 and 2019. The attorney general’s office filed the lawsuit in 2019 against the organization and its leaders, claiming they violated state laws, KING-TV reported.

Court documents said the organization was in debt but had a current insurance policy to cover adverse actions such as mismanagement, employee theft and fraud.

“This million dollars can be used to pay all of those folks back and I can’t think of a better (situation) than making someone whole for the honorable work that they did and honor the service they gave,” state Attorney General Bob Ferguson said.

The organization was formed in Pierce County in 1988 to provide job training, employment, housing and social services to homeless veterans.

Rosemary Hibbler, an Army veteran, ran the organization from 2015 to 2019 and was the subject of an investigation by KING-TV that the station said uncovered the use of funds for Hibbler’s rent, utilities and other expenses. Hibbler was later fired.

The attorney general’s office has an open criminal investigation, but neither Hibbler nor former organization board members have faced any criminal charges.

Hibbler has denied wrongdoing and accused KING-TV and Ferguson of racism. Hibbler is Black.

“With the climate being as it is today, it amazes me that KING 5 is still taking a position to support discrimination and racism,” Hibbler said, asserting that the state violated her rights and never conducted an actual investigation.

The Veterans Independent Enterprises of Washington was acquired by Nine-Line, a veterans organization based in Fife. It’s president Shawn Durnen currently employs a handful of employees who worked under Hibbler.