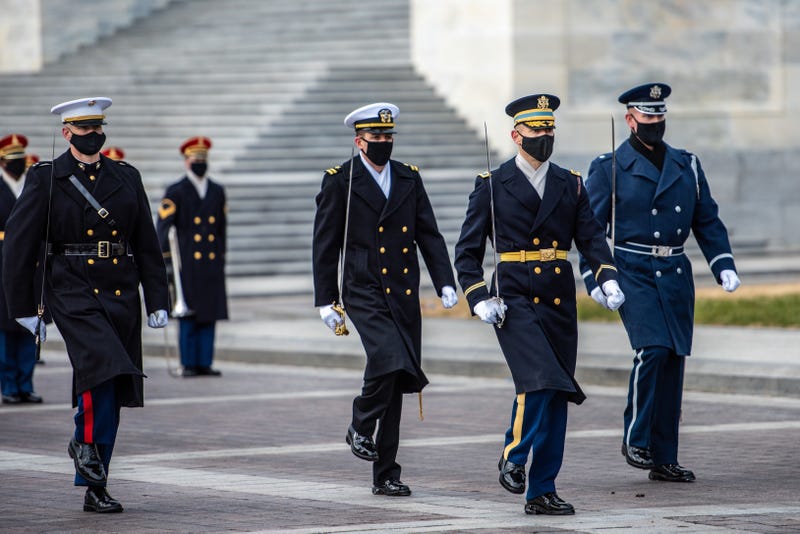 Ceremonial marchers participate in an 59th presidential inauguration rehearsal for President Joe Biden in Washington, D.C., Jan. 18, 2021. Military members from across all branches of the armed forces of the United States, including Reserve and National Guard components, provide ceremonial support and defense support of civil authorities around the inauguration. Photo By: Army Sgt. Jacob Holmes Photo credit US Army
By DVIDS Connecting Vets

While the COVID-19 pandemic has curtailed much of the military-influenced pomp and circumstance that typically surrounds a presidential inauguration, service members will still play an important role during the event, said the commander of Joint Task Force — National Capital Region, which orchestrates the military's involvement.

During a teleconference Tuesday afternoon, Army Maj. Gen. Omar Jones, who also serves as the commander of the U.S. Army Military District of Washington, outlined the roles service members will play during the inauguration of President-elect Joe Biden.

First, he said, will be to provide security support to civilian law enforcement personnel.

"All security support from the DOD [Defense Department], to the inauguration, to civil law enforcement organizations is being provided by Title 32 forces ... all through the National Guard," Jones said. Title 32 service members are National Guard personnel who are operating in support of state governors. Active duty service members operate under Title 10.

"There are no Title 10 forces that are conducting security operations in support of civilian law enforcement for the inauguration," Jones said.

Active-duty service members from all branches of the service do have a role in the inauguration, however. They will perform traditional ceremonial roles as well as provide consequence management support, Jones said.

Consequence management involves U.S. military personnel being ready to provide support to civilian authorities if requested by them to do so and if that request is approved by the secretary of defense.

Jones said there are soldiers and Marines stationed within the National Capital Region ready to provide that support. There are also Navy airborne search and rescue crews and Army and Air Force helicopters, as well.

"Those are the kind of capabilities we have available ... again, if directed to provide Title 10 consequence management support," Jones said.

The most visible role the U.S. military will play is in providing ceremonial support to the inauguration, Jones said. As a result of the COVID-19 pandemic, however, there will be no inaugural parade this year, and so the military's role has been reduced.

For previous inaugurations, Jones said, some 5,500 personnel have been brought into Washington from around the world to participate in the inauguration. This year only about 2,000 personnel will participate — and most of those are from the local area.

"We have tried as much as we can ... to take from local forces," Jones said. "It hasn't been 100%, but it's been pretty darn close because we are, as you can imagine, very conscious of the pandemic, very conscious of the increased risk both to our force but also to the American public by folks having to travel. So, as much as possible, we've tried to resource all the Title 10 regular military requirements from members of the DOD team here in the National Capital Region."

This year, service members will participate in a pass and review for the new president on the steps of the U.S. Capitol. There will also be a new element to the inauguration this year. Biden will lay a wreath at Arlington National Cemetery following the swearing in ceremony, Jones said.

"It's an honor to have our new president honor both our fallen as well as our unknown who are memorialized at Arlington National Cemetery, and it's humbling to be a part of that," Jones said.

Service members will also escort Biden to the White House — which is a tradition more than 230 years old.

"[It's] in keeping with the tradition that goes all the way back to our first inauguration of George Washington in 1789, when the military escorted George Washington from his swearing in to his residence in New York City," Jones said. "Frankly, it's an honor for the joint task force and for the U.S. military to be part of that and to sustain that tradition."

As part of all the U.S. military support to the inauguration, Jones said, military personnel will practice necessary social distancing.

"You will see physical distancing among all the service members, [among] the formations for the presidential escorts you will see us wearing face coverings ... to protect the force, to protect our mission, consistent with the pandemic that all of us continue to be faced with," Jones said.