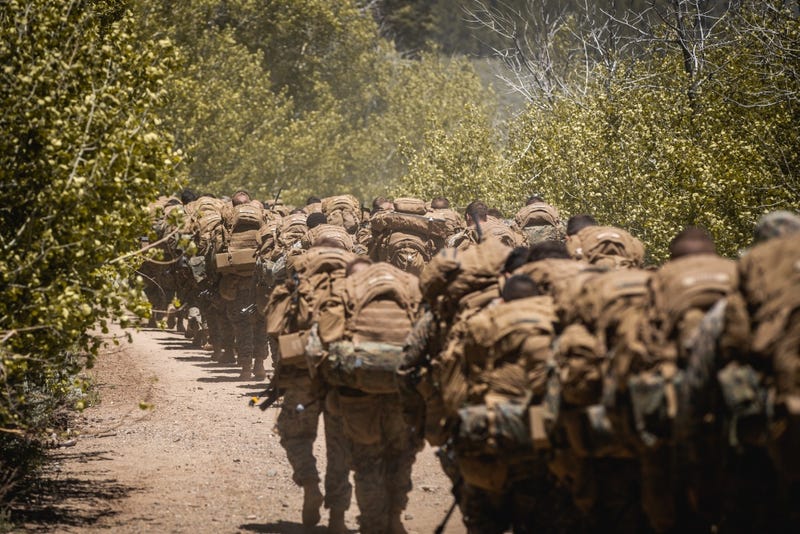 In October, three Marine veterans were arrested and charged by the Department of Justice for alleged "conspiracy to unlawfully manufacture, possess, and distribute various weapons, ammunition, and suppressors."

It wasn't until recently that the full scope of the arrests and federal charges against Liam Montgomery Collins, 21, Paul James Kryscuk, 35, and Jordan Duncan, 25, were revealed. A fourth man named Justin Wade Hermanson is also named in the recently unsealed indictment. Hermanson, Duncan and Collins, all previously served in the Marine Corps.

Together, the men formed a white supremacy "death squad" in addition to illegal manufacturing and smuggling weapons, according to the court documents. On a now defunct neo-Nazi message board, Collins posted about the group he was starting which he called a "modern day SS."

He went on to describe the group writing, "…everyone (in the group) is going to be required to have served in a nation’s military, whether US, UK, or Poland...Its a goal for the longterm. I’ll be in the USMC for 4 years while my comrades work on the groups physical formation...It will take years to gather all the experience and intelligence that we need to utilize – but that’s what makes it fun. It takes a man’s willpower and heart to make a commitment like this," the indictment quotes.

In another post, Kryscuk laid out the group's agenda writing, "First order of business is knocking down The System, mounting it and smashing it’s face until it has been beaten past the point of death...eventually we will have to bring the rifles out and go to work. . . .We will have to hit the streets and strike as many blows to the remaining power structure as we can to keep it on the ropes...forget the pawns and go for the knights, kings, and queens..."

He goes on say that they will help usher in the balkanization of America and that, "essentially we are laying the framework for a guerrilla organization and a takeover of local government and industry." From his point of view, this upcoming civil war will look like America's recent wars in the Middle East. "This will be a ground war very reminiscent of Iraq as we will essentially be facing an insurgent force made up of criminals and gang members," he wrote.

According to Collins, they formed a tight-knit crew that would go hiking together, train together and planned to buy land together. They also began manufacturing and selling their own weapons, according to the federal indictment.

In July of 2020, the group got together for some live fire-range training which they made a video of. At the end of it, the members are seen wearing skull masks and giving the Nazi salute. The video then displays the statement, "Come home white man."

Throughout the summer, the group allegedly began collecting open-source information on the Black Lives Matter (BLM) movement in Boise, Idaho where the lived. They also began conducting surveillance on BLM rallies and exchanged text messages about how they would attack, the indictment says.

The members of the group could face sentences of up to 20 years in prison if convicted.