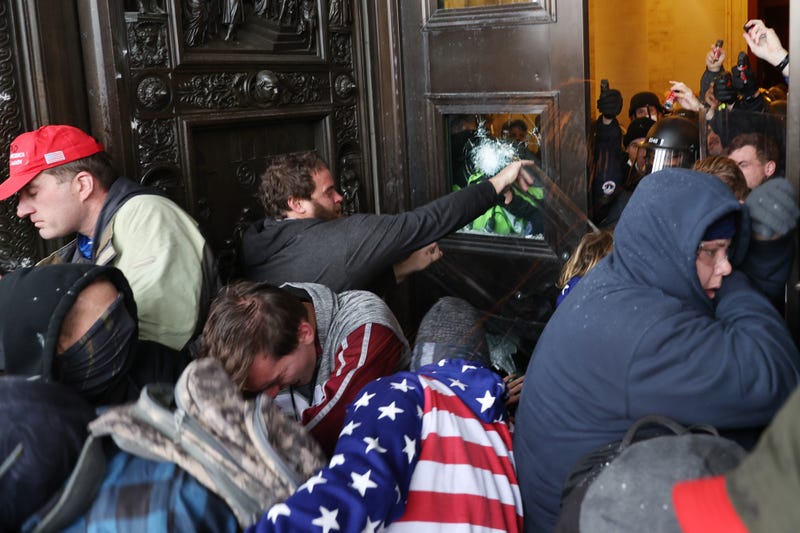 On January 6, a peaceful rally took place in Washington D.C. in support of President Donald Trump. That afternoon, Congress was scheduled to certify the electoral votes for the 2020 Presidential election, which Trump falsely claims was rigged and stolen from him. During the rally, he told his supporters for over an hour that the election was rigged and that, "We fight like hell and if you don’t fight like hell, you’re not going to have a country anymore." He ended the speech by saying they would now walk down Pennsylvania Avenue to the Capitol building as Congress was set to certify the election for President-Elect Joe Biden.

The rest was history as hundreds of pro-Trump activists turned into rioters, storming the capital building, smashing widows, assaulting police officers, and looting the building. Trump supporter and QAnon member Ashli Babbit was shot and killed as she tried to climb through a broken window. A police officer died days later, having been hit in the head with a fire extinguisher. Another police officer involved died by suicide over the weekend.

Many veterans have been identified amongst the rioters, including Babbit, retired Air Force Lt. Col. Larry Brock, and Army PSYOP Cpt. Emily Rainey. Also at the rally turned riot was a former Special Forces officer, according to several sources in the Special Operations community and social media posts.

California reps are expensive, but the payoff is high. https://t.co/bJ12LgNKvz

On January 5, the day before the riots, pictures were posted to Twitter showing a sticker on the nameplates of Speaker Nancy Pelosi and Rep. Adam Schiff. The sticker says "GOLDCORP" with a man holding his arms open displaying the words, "teamwork makes the dream work." Even with photoshopped laser eyes, the person depicted is clearly former Green Beret turned actor Terry Schappert.

But what is GoldCorp and how did their sticker end up tagging the nameplates of congressional representatives the day before a riot hit the building? Some corners of the internet claim that GoldCorp is a shadowy paramilitary white supremacist organization, but the truth is somehow both more benign as well as more ridiculous than one imagines.

"GoldCorp was just kind of how can we find idiots, get them to act like idiots, and as long as they are on the same side at the same time can we get as many people as possible to retweet and push their congressmen to help Alwyn Cashe," said Curtis, an Air Force veteran that shares the meme online. "That is literally the purpose of GoldCorp."

Those involved in GoldCorp played a part in pushing for the late Sgt. 1st Class Cashe to receive a post-humous Medal of Honor. Cashe perished during the 2003 invasion of Iraq while rescuing his soldiers from a burning vehicle. Many service members feel that Cashe is deserving of the nation's highest honor and have petitioned the government on his behalf.

In the world of internet subcultures and micro-influencers, GoldCorp became a thing as a group of veterans used the hashtag and at least four of them monetized the meme by selling stickers and t-shirts. As some left-leaning veterans accused them of being the next incarnation of the Boogaloo movement, it simply fueled a cycle of online trolling.

"It's a self-licking ice cream cone, everyone who latched on to this shit sells shit to each other," Guy told Connecting Vets. He has since distanced himself from the meme that he started, feeling that it is kind of lame at this point.

When the GoldCorp sticker was photographed on Nancy Pelosi's office nameplate and posted openly on GoldCorp meme accounts, some accusations spread that they had been doing preparation and reconnaissance for insurrectionists.

Curtis explained to Connecting Vets that he does not know who put the sticker there. "Somebody stuck one on it and it had nothing to do with anything," he said. "Who the hell would have known what would have happened?"

Stopped by to flex on “Pencil Neck.” pic.twitter.com/2ifQEni9yL

"The optics kind of suck," Guy conceded. However, he added, "do I think any of those dudes pulled a recce for Wednesday? No, I don't. It is one of those things where they don't think four steps ahead. Who really foresaw the goddamn capitol turning into the CHAZ one day later?"

Guy, who describes himself as center-right, in no way condoned the events that happened that day.

The same was true of Terry Schappert when Connecting Vets reached out to him to talk about how his likeness appeared at Speaker Pelosi's office.

"They created memes, etc. - including taking a picture of me off the internet and using it. I didn't control that and don't know who started it," Schappert told Connecting Vets.

"The joke -- as I saw it -- had to do with me being an old guy and wearing that small bathing suit. I don't know who took that pic off the internet and created the meme, so I can't tell you if there's any symbolism or deeper meaning to it," Schappert elaborated.

Disclosure: Schappert and the author are old friends and have done media appearances together in the past.

When asked about his thoughts about the riots at the Capitol building he said, "any violence of that kind is wrong. Whether it's Antifa or far-right groups. All of it is bad."

With Schappert somewhat bewildered by how he ended up as a GoldCorp mascot, and Guy and other Special Forces members who were originally involved in creating the meme distancing themselves, the question becomes who is now behind this internet subculture? Guy said he knows who less than half of them are at this point. Is GoldCorp just a harmless meme and inside joke, or is it becoming something more?

Several members of the Special Forces community intimated that the person who placed the sticker in the Capitol building is a former Special Forces officer. That individual posted a picture he took at the rally the day of the riot as well as made a post announcing that his job application to GoldCorp had been accepted. Connecting Vets reached out to him via his social media and email but did not receive a reply by the time of publication.

While GoldCorp really is just an inside joke, there have been many instances where memes, internet narratives, and subcultures express themselves into society, sometimes violently. Examples are plentiful, from the initially harmless boogaloo jokes to vile 4chan posts about eco-fascism that inspired the ChristChurch murderer in New Zealand.

Likewise, modern-day "leaderless" movements pose a number of unique issues, such as who is really in charge. This method of social interaction was in many ways pioneered by the Spanish indignados movement, the hacker group Anonymous, Occupy Wall Street, and others as a way to relate to one another while conducting social activism. Since that time, leaderless movements as a tactic have fused with meme subcultures, including right-leaning ones like the boogaloo boys. Just as fast as these movements are created, they gain media attention, then law enforcement attention, and sputter out, only to morph into the next meme.

For Curtis, GoldCorp is simply a means for veterans to find camaraderie during a period of social isolation. "It's just an escape, and that's part of Goldcorp too. There is no actual Goldcorp, it's just a joke."

What may have started out as a joke, is seen by some as a provocation. And while it may be humorous for many, that joke is only funny up until the moment that it isn't anymore.

"It was super funny when it started but the next thing I know..." Guy said.

Meanwhile, Rep. Mikie Sherrill posted a video on Jan. 12th stating that she intends to investigate and hold accountable, "members of congress who had groups coming through the Capitol that I saw on January 5th, a reconnaissance for the next day."

🚨BREAKING: Rep. Mikie Sherrill (D-NJ), a Navy veteran and Annapolis grad who sits on the House Armed Services Committee, said she saw fellow members of Congress "who had groups coming through the Capitol that I saw on Jan. 5, a reconnaissance for the next day." pic.twitter.com/YbZkW1qq7T

This article has been updated to include comments from Curtis and Rep. Mikie Sherrill.

Reach Jack Murphy: jack@connectingvets.com or @JackMurphyRGR.
Want to get more connected to the stories and resources Connecting Vets has to offer? Click here to sign up for our weekly newsletter.