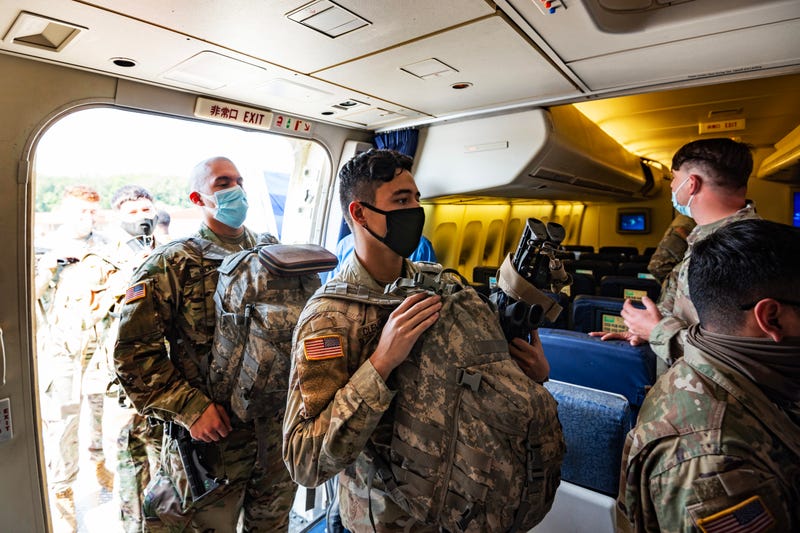 "We issue orders and people follow them," Chairman of the Joint Chiefs of Staff Gen. Mark Milley said Wednesday. The chairman explained that the country has done "reasonably well" against the pandemic, and the military -- for multiple reasons -- has "faired fairly well."

One of those reasons, Milley explained, is that the military -- unlike the general civilian population -- faced "stringent restrictions" while the rest of the country considered recommendations from the Centers for Disease Prevention and Control, guidance from the White House and state and local governments, which did not always align.

These restrictions were partly a result of "lessons learned" from early outbreaks such as on the USS Theodore Roosevelt -- but they were also part of a "global pandemic op order that's been in existence."

These restrictions early on helped the military to assist the general population during the beginning stages of the COVID-19 crisis, Milley explained, and have kept deaths within the DoD comparably low -- but it wasn't just restrictions.

"Probably the biggest contributing factor was our demographic," Milley said. "Our demographic is not the same as civil society. Our demographic, to no one's surprise, is mostly young people who are highly fit and they tend to fair reasonably well if infected.

The military's demographic and its early restrictions helped it perform "at least equal to or better than any of the militaries in the world as they dealt with the pandemic," Milley said -- all while also supporting the civilian population's fight against COVID-19. At the peak military activations, 62,000 service members were working in one capacity or another against the pandemic.

The DoD certainly did not walk away unscathed from the pandemic, of course. The 12th military fatality occurred just last week and more than 117,000 have been reported infected.

"The U.S. military has faired fairly well -- not perfect. We have had deaths and those are tragic. We have had troops that are sick, et cetera," Milley said.

"But statistically speaking, relative to the whole, the number of deaths and sicknesses within the force, within the military has been relatively small," he added.

And the military's part is not over yet. As the rollout for the COVID-19 vaccine approaches, the DoD's role in Operation Warp Speed has ramped up. Milley said the military is prepared to begin distributing the vaccine within "the next week or two or three."

So the military, according to Milley, faired well this time around -- but what about next time?

"Could this virus or any other virus or other biological type systems be deployed for nefarious purposes by intent? Yes it could and yes it is a concern," Milley said.

While it would be a "very, very drastic move" and an "utter act of war, which would have a devastating response from the United States," Milley explained that the U.S. knows there are organizations attempting to do just that -- and the military is preparing for it.

"We need to take the lessons learned from this current pandemic and role those into capabilities to defend ourselves, so in the future we have stockpiles of PPE and we have organizations that are capable for rapid deployment," he added.

"It's something that we need to be on guard against."