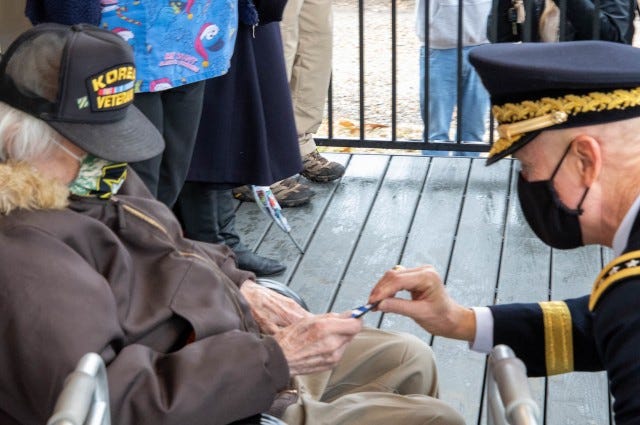 By Warren Marlow
DAVENPORT, Iowa – Except for his college days and military service, Korean War veteran J.P. Whitaker has spent all of his 92 years in the same home in this Mississippi River town.

So when friends wanted to renovate his house and make it more accommodating to a person with senior needs, Whitaker balked.

“He was not a fan of that in the beginning,” said a longtime friend, Army Reserve Lt. Col. Jeno Berta. “He’s a child of the Depression and he’s one of those who says, ‘Everything’s fine, we did without for years, I don’t need any of this.”

But after what Berta had contributed to his country and community, his friends weren’t about to accept that answer.

“We decided that he deserves a home refurbishing and there were safety concerns,” Berta said. “We wanted to get his laundry, bedroom, and shower on the first level.”

The process took six months, during which time Whitaker resided in an assisted living facility. When he returned home on Nov. 14, there had been one final addition: A flag pole. This enabled Whitaker’s welcome home ceremony to include the raising of the flag which had been flown over Rock Island Arsenal in his honor. The event also included a drive-by conducted by Patriot Guard riders and a bugler playing, “To the Colors.”

First Army Commanding General, Lt. Gen. Thomas James Jr., presented Whitaker with several items, including a First Army coin and a patch of the 3rd Infantry Division, which both James and Whitaker served in.

“Korea is so appreciative of what you did,” James told Whitaker. “Seoul is one of the most advanced cities in the world because of the sacrifice of you and those who fought with you. It’s a special opportunity to meet you, sir, and to honor you.”

Davenport Mayor Mike Matson, a retired Ranger and command sergeant major, added, “J.P., this is a great day. Thank you so much for your service. The city of Davenport is proud of you.”

Berta called it a fitting day for a great man.

“J.P. Whitaker is an American treasure,” he said. “He served our nation with honor and distinction with the 3rd Infantry Division in Korea. He has told me, ‘Jeno, I ran out of ammunition once and it will never to me happen again.’ And as someone who has been responsible for inventorying his firearms, I can assure you that is the case. He served our nation, he came home, and went to Bradley University, then worked at John Deere. He’s a fantastic baseball player, he is an artist, and he is a motorcycle enthusiast. The faster he goes, the more he likes it.”

Whitaker loved everything about the day, especially the flag.

“It’s great, everybody should have one,” he said. “It shows the strength of the United States.”