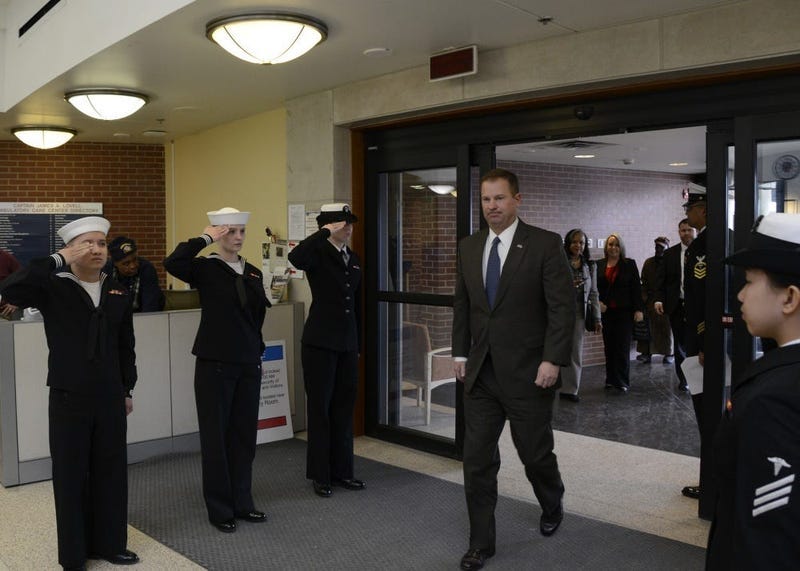 This story was updated Nov. 20 at 11:31 a.m. EST to include comments from the White House, VA, Congress and others.

Former Department of Veterans Affairs Deputy Secretary James Byrne said his refusal to follow a directive to discredit a veteran and senior Congressional advisor who said she was sexually assaulted at a VA hospital contributed to his removal, according to a Thursday evening report from Newsweek.

Connecting Vets confirmed Newsweek's reporting on Thursday through interviews with Byrne, VA and White House officials. Those officials spoke on condition of anonymity either because they were not authorized to speak publicly or because they said they feared retaliation.

A Navy Reserve officer and senior advisor for the House Women Veterans Task Force said late last year she was sexually assaulted at the D.C. VA Medical Center. Connecting Vets is withholding her name from this story at her request.

In February, an anonymous written complaint was submitted to the House Veterans Affairs Committee alleging that VA Secretary Robert Wilkie personally sought and shared with staff "damaging information" about the veteran in an attempt to discredit her. Wilkie is being examined by an independent watchdog agency over those allegations. Byrne told Connecting Vets on Thursday he was not the author of that complaint, but decided to come forward to share his story which corroborates some of those allegations.

Wilkie and VA have strongly denied the allegations against him and in an emailed statement on Friday, VA Press Secretary Christina Noel called Byrne's allegations "false," said he was fired for cause, sought to discredit him and defended Wilkie.

Wilkie "did not and never would do anything of this sort," Noel told Connecting Vets previously. "I never would do that to a fellow officer -- it is a breach of honor," Wilkie said of the woman veteran in a statement earlier this year.

The complaint followed shortly after Wilkie fired Byrne, his No. 2 at the massive federal agency, about five months after his confirmation in the Senate. Prior to his confirmation, Byrne, a Marine veteran, served as acting deputy secretary.

Wilkie said he dismissed Byrne because of "loss of confidence." Two days later, Wilkie called it a "simple business decision," adding that it was "nothing personal" and Byrne failed to "jell" with other members of VA leadership. Noel said Byrne's "dismissal has nothing to do with" the veteran's case.

A few weeks later, lawmakers asked the VA Inspector General to investigate. House Veterans Affairs Committee Chairman Mark Takano, D-California said he was concerned "Wilkie and other VA officials may have unlawfully accessed or attempted to access (the veteran's) military service records, medical records, or took other actions to obtain sensitive or personal information about (her) with intent to discredit her character and retaliate against her."

Byrne said he was not certain where Wilkie allegedly first sourced information he told staff about the veteran.

VA Inspector General Mike Missal agreed to review the allegations against Wilkie. As of Thursday, that report had not yet been released publicly, but Byrne said he was interviewed as part of the review. Missal said in a statement to Connecting Vets Friday that the matter remains a "high priority" for his office and IG plans to publish a report on its findings when the review is complete.

Wilkie believed Takano and other Democrat leaders in Congress may have contrived the allegations of sexual assault to damage Wilkie personally as a senior member of President Donald Trump's cabinet, Newsweek first reported and Byrne also told Connecting Vets Thursday. Wilkie's belief that the allegations were invented were what led him to allegedly seek the damaging information about the veteran, Byrne said.

Byrne and Wilkie had worked together for about a year when he says the VA secretary charged him with "shopping dirt to the media" on the veteran in an attempt to discredit her and her allegations, which Byrne said Wilkie characterized as attacks against him and VA. Wilkie allegedly gathered the information and asked Byrne and other staff to share it.

Byrne didn't outright refuse, he said, but instead told Wilkie repeatedly, "I hear ya," to avoid giving a definitive answer. He says he never followed the directive -- but Wilkie also approached other VA staff Byrne said may have been more willing.

"Maybe he thought I was going to be a good little Marine and run out and do it," Byrne told Connecting Vets. "I truly didn't think they (other VA staff) had taken it out of the house. "I just thought, 'They're not going to do this. This is indecent, immoral, unprofessional.'"

"He basically said this is what good deputies do for their secretaries," Byrne said. "That was the souring of our relationship. It was never that good to begin with."

Byrne said his refusal to spread information about the veteran was likely not the only reason Wilkie fired him. Byrne also says he refused to issue several formal memos ordered by the secretary, attempts to remove other VA officials and "lighten up" on oversight of the department's $16 billion electronic health record modernization project.

Perhaps the biggest reason Byrne was removed from his Senate-appointed position was because Wilkie believed the president might fire him and thought to avoid it by firing his apparent replacement instead, Byrne alleged. Byrne was fired just a few days before the date he claims Wilkie was expected to be fired, when he says he was told by White House staff to avoid traveling from D.C. and "be prepared to assume the big chair."

A letter Byrne said he was provided upon his dismissal said it "served as confirmation that the president concurred with Secretary Wilkie's request to remove" him from his appointed position, but appeared on a page without any signature or letterhead. The letter said it originated from the White House Office of Presidential Personnel.

White House officials told Connecting Vets on Friday they had "no comment" regarding Byrne's allegations about the VA secretary.

Wilkie told Byrne on Feb. 3 that he'd "lost confidence" in him and demanded his resignation, Byrne said. He initially refused, arguing only the president could dismiss him, and was escorted out of VA headquarters by security guards.

Rep. Dan Crenshaw, R-Texas, was specifically named in the complaint. Wilkie mentioned the Congressman as someone who helped him confirm information about the veteran, Byrne alleged. Crenshaw, a former Navy SEAL, at one time served with her. Earlier this year Crenshaw's staff said he had never been contacted by anyone at VA about the veteran, and told Connecting Vets Friday they had nothing more to add.

1/My client, a Navy veteran sexual assault victim, was subject of high level political smear attacks that led to firing of Deputy Secretary @DeptVetAffairs, who has now gone on record.

'You've got a story to tell'

At first, Byrne said he feared sharing his story because it could hurt VA, and therefore veterans, and was dealing with his own bitterness over being dismissed.

"VA's had a lot of turmoil. Turmoil in the leadership translates into veterans losing confidence in the VA and not coming in and getting care, benefits and treatment, and it results in dead veterans," he said. "I can't shake that. I couldn't shake that and go stand up for myself and take this guy down."

During the election, Byrne said he was pressured by some to come forward, but says he he wanted to avoid becoming a "political football" and stayed out of it.

"There's going to be turmoil now anyway at the VA with turnover," he said. "I don't think I'm going to add too much more turmoil ... It's sort of like a shot in my arm going 'You've got a story to tell, so you need to stand up and take the arrows or whatever comes that way.'"

Takano said in a statement Friday that the House Veterans Affairs Committee would "not turn a blind eye to inappropriate behavior or statements that seek to discredit survivors of sexual assault or harassment.

"Sadly, this type of denial, and an unwillingness to seek out truth is exactly the problem that has plagued VA and our nation’s military - casting doubt on survivors and sullying their good names will not fix the decades of injustice these servicemembers have endured," Takano continued. "If VA hopes to fully embrace the contributions these survivors have made to our country, it must step up and build a change in culture - a change that starts at the top.”

Sen. Jon Tester, ranking member of the Senate Veterans Affairs Committee, said in a statement to Connecting Vets Friday that he found the allegations against Wilkie "extremely disturbing" and he was awaiting the Inspector General's report.

"Any officials found to be implicated in this incident have no place at the Department of Veterans Affairs and must be held accountable," Tester said.

During Congressional testimony on VA's budget in February, Wilkie committed to testifying at a future hearing on sexual assault at VA facilities. He did not attend, but sent Acting Deputy Secretary Pamela Powers in his place. Following his February testimony, Wilkie told reporters he hoped the hearing would provide an opportunity to clear the air about the veteran's case and allegations against him.

In September, the veteran said that a man sexually assaulted and harassed her at the Washington, D.C. VA Medical Center. She said multiple people witnessed the alleged assault, and that she tried to report it to several VA staffers who were slow to react or unresponsive until police were involved.

At the time, Wilkie promised a full investigation from the Office of the Inspector General.

But that investigation concluded earlier this year with no criminal charges filed. Multiple sources with knowledge of the case told Connecting Vets this was due, at least in part, to a lack of functioning security cameras at the hospital in the area the assault took place.

Records obtained by Connecting Vets through Freedom of Information Act requests confirmed that the one camera in the area was malfunctioning at the time of the incident.

VA Press Secretary Christina Mandreucci told Connecting Vets "all cameras in the DC VA are fully functional and have been since September 2019" following the incident.

Wilkie announced that the case was closed without charges in a letter to Congress last month, where he also called the veteran's report “unsubstantiated claims,” setting off a firestorm of criticism from lawmakers and advocates.

Wilkie told reporters earlier this year he regretted his use of the phrase and didn't intend to suggest that she was lying about her assault.

"I have to know, she has to know, if our facilities are safe," Wilkie said. "We're going to make a renewed push to get answers ... to help us help ourselves and help women veterans to make sure that they feel safe and welcomed."

For confidential help with sexual assault 24/7, call the National Sexual Assault hotline at 800-656-4673 or go to online.rainn.org.