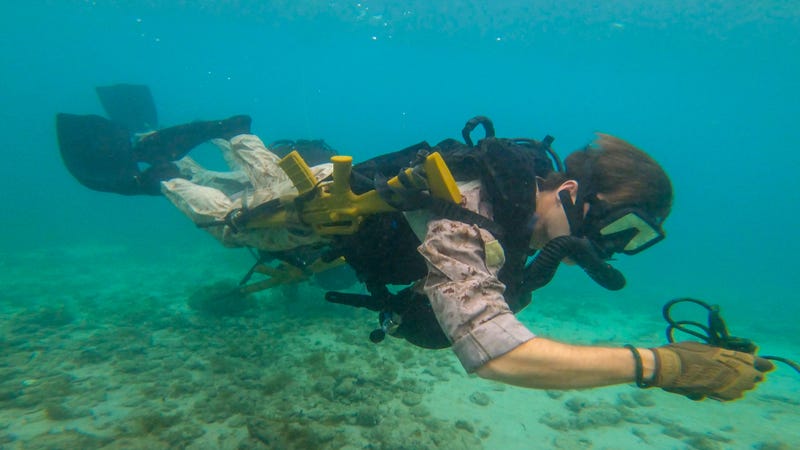 The training increases interoperability between the Netherlands Marine Corps and the U.S. Marines as they work side-by-side as partner nations. 2nd Recon Bn., stationed on Camp Lejeune, North Carolina, don’t often have the opportunity to work in tropical waters such as those of Aruba. To further develop the relationship between the two units, the Dutch Marines, will in turn, travel to Camp Lejeune in coming months to perfect their own tactics in a foreign climate and to perform myriad other types of training in the U.S.

“The training circumstances here in Aruba are optimal,” said Netherlands Marine Corps Capt. Mark Brouwer, a Dutch exchange officer embedded with 2nd Recon Bn. “We have everything in place here to train a lot better than we could’ve on Camp Lejeune. On top of that, the skills we teach to 2nd Recon, we do here on a daily basis."

The 32nd Raiding Squadron is regarded as an essential line of defense for the island of Aruba. Their effectiveness in conducting open water operations and their integration with their naval counterparts represent vital skills for 2nd Recon Bn. to hone. This bilateral training increases proficiency in a variety of skills necessary to complete their mission.

“There is nowhere else we could’ve trained with a full troop of Dutch Frogmen,” said Foster. “The environment here in Aruba is better suited to developing the skills that will help us in future operations, and it really helps us integrate with the Dutch who will be a really strong partner in the event we have to operate in Eastern Europe or the high North.”

2nd Recon Bn. completed a visit, board, search, and seizure training package as well as dive training, and a series of firing ranges. Being able to learn from the Netherlands Marines in their primary area of operations, helps 2nd Recon Bn. build a faster, more mobile, and more lethal force when operating in such diverse locations.

“The training is helping us build new unit operating procedures,” said Sgt. Zachary Palmgren, a team leader with 2nd Recon Bn. “The water is clear so the dive teams can see what they’re doing and better build on the foundations they have. The VBSS training helps us integrate with the Dutch, and it shows us a more real-world application for the training we do at home.”

By working together, Marines from both nations developed a better understanding of how to implement new techniques. This type of bilateral training is critical, in particular when fighting in littoral and coastal regions. 2nd Recon Bn's mastery of these skills is paramount if they are to integrate effectively with their own naval counterparts.

sports
Angels' Mike Trout favored to win AL MVP
news
High school assignment on 'chivalry' asked girls to curtsy, dress to impress males and not 'whine'
sports
Bet on the Iowa Hawkeyes to get a No. 2 seed in the NCAA Tournament
music
COVID-19 restrictions change in Texas and Mississippi, but some concert venues still staying closed
sports
NBA player props: 3 best bets for Thursday, March 4
music
Miranda Lambert becomes the first female Country star with her own bar on Broadway in Nashville