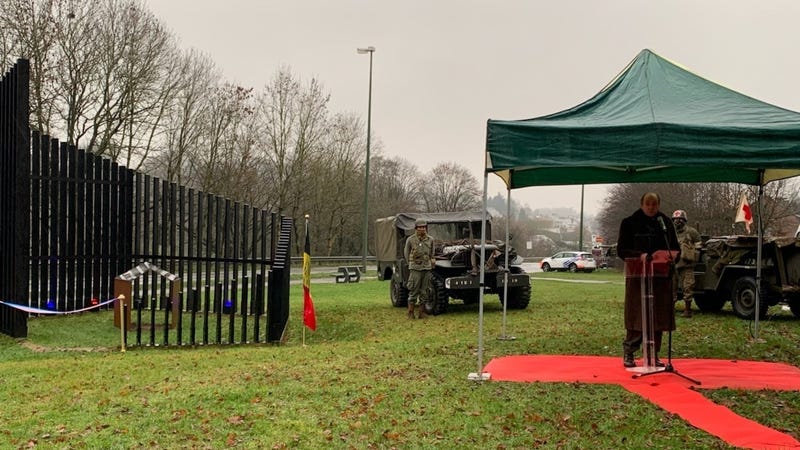 A commemoration of the 76th anniversary of the Battle of the Bulge focused on the heroic actions of nurses. Photo credit U.S. Army/Julie Piron
By DVIDS

During a year defined by a global pandemic and as part of the 76th anniversary of the Battle of the Bulge, one of the deadliest battles and most decisive Allied victories of World War II, a commemoration Dec. 11 and 12 in Bastogne focused on the heroic actions of nurses.

A party of dignitaries unveiled a plaque Dec. 11 in honor of two Belgian nurses in particular, Renée Lemaire and Augusta Chiwy, who delivered aid and comfort to U.S. military service members during that harsh, more-than-monthlong winter battle.

The German army launched a counteroffensive against the Allied forces in December 1944 in the Ardennes Forest in southeastern Belgium, seeking to split and drive them out. Both Lemaire and Chiwy volunteered at the first aid station of the U.S. 20th Armored Infantry Battalion, 10th Armored Division.

Lemaire gained the reputation as “the Angel of Bastogne” for the care she delivered to wounded Soldiers. Lemaire died after the first aid station was bombed Dec. 24.

Chiwy, who was in an adjacent building, survived the blast and continued treating the wounded. She built a career in nursing after the war, and her role in the battle went largely unrecognized until late in her life. She was appointed as a Knight of the Order of the Crown and was presented a medal on behalf of the King of Belgium. Chiwy died in 2015.

Spangler said standing in for the Army Nurse Corps was “beyond an honor.” The stories of both nurses, one who died in the line of service and one who continued working after surviving a fatal bomb blast, served as inspiration. Chiwy, who continued nursing the wounded even after enduring battle trauma, impressed Spangler.

“She continued to persevere and continued to take care of the wounded,” she said. “That’s the true testament to selfless service right there. It doesn’t matter what country you’re from, we’re here to help those who are around us and in need.”

Col. James Yastrzemsky, the commander of U.S. Army Garrison Benelux, represented the garrison at the event, and remarked how critical nurses, medics, and doctors have been to our military’s ability to survive and win on the battlefield.

“Having recently served alongside medics in an Army Aviation unit (Air MEDEVAC) in the 101st Airborne (Air Assault), I fully appreciate the meaning of the Red Cross symbol and the people who wear it proudly on their sleeves – they truly are angels of the battlefield,” he said. “It is a steadfast symbol of protection and hope that reassures our service members prior to every mission assistance is nearby at the ready. We have been together prior to Bastogne and we remain in this together amidst the current pandemic.”

Yastrzemsky attended the event alongside Garrison Command Sgt. Maj. Katrina Herzfeld. A color guard from the garrison joined them. Of the event, Yastrzemsky said “it was an absolute honor to stand on sacred ground of those brave men and women who came before us in Bastogne.”

The 101st and 82nd Airborne Divisions played key roles in the Allied victory during the battle, and Yastrzemsky felt pride that his Family’s history is tied both to the 82nd AD and to the Battle of the Bulge.

“For me, it’s personal,” he said. “My father was an 82nd Airborne paratrooper during the Vietnam era who raised me with the airborne winning spirit of the World War II generation. My grandfather-in-law also courageously served during the Battle of the Bulge, becoming a POW and enduring many months of captivity to ultimately witness the Allied victory.”

Gidwitz, during his remarks at the ceremony, believed the monument signified all the contributions nurses made on the front lines of the war.

“The monument we are officially unveiling today is a tribute to the two Angels of Bastogne, to ensure they’re never forgotten,” said Gidwitz. “More broadly, it’s also a tribute to all of the nurses who risked their lives on the front lines during WWII. All too often, their roles have been forgotten and we owe them a tremendous debt of gratitude.”

“Whether it’s a war or a pandemic, we’re all coming together because we want to get through it,” said Spangler. “We’re banding together to take care of who is right in front of us.”

Some of the events typical of the yearly commemoration at Bastogne did not take place because of the ongoing COVID-19 pandemic.

During a typical year, townspeople would throw nuts from the balcony of the city hall in homage to when Brig. Gen. Anthony McAuliffe, acting commander of the 101st Airborne Division defending Bastogne, said “Nuts!” upon hearing the Germans were prepared to accept U.S. surrender at the beginning of the battle. The commemorative walk was also canceled.

The party did lay wreaths at the McAuliffe and Gen. George S. Patton monuments Dec. 12.

Although there were no public events due to COVID-19 preventive restrictions, the Bastogne organizers still felt it important to show their everlasting gratitude and to honor the many soldiers who endured so much in their town in 1944 and 1945 to save Belgium, Europe and the world.

The current global health crisis and the globe-encompassing nature of World War II also held resonance with Spangler. SHAPE Healthcare Facility has the distinction of being the only internationally operated medical facility in the Department of Defense.

“We had to make sure we provided an environment where people could grow and learn and have different countries come together that could do that,” she said.

“It takes a team to do what we do in health care,” Spangler continued. “Although we’re highlighting Army nursing, it’s all of the medical teams, whether that’s the medics on the front line to the folks drawing your blood, to the administrative team, logistics supply, it takes all of us working together ultimately to take care of the wounded or people that are just coming in for care.”