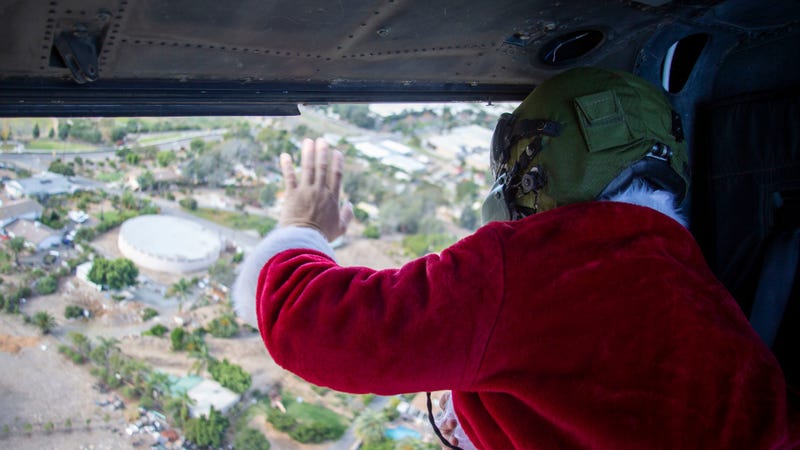 U.S. Marine Sgt. William Hinkle, or Santa Claus, waves to families while as he flies over a neighborhood outside of Marine Corps Base Camp Pendleton, California. Photo credit U.S. Marine Corps/Lance Cpl. Drake Nickels
By Marines.mil

With COVID-19 looming over the holiday season, many families have been forced to alter plans and, in some cases, stop their yearly traditions. One of the most popular traditions taking an operational pause this year is children getting the chance to visit with Santa and tell him all their hopes and dreams when it comes to what will be under the Christmas tree. It’s hard to maintain social distance while sitting on Santa’s knee.

Enter the Marines of Marine Light Attack Helicopter Training Squadron 303, Marine Aircraft Group 39, 3rd Marine Aircraft Wing, and their plan to fly Santa over neighborhoods on Marine Corps Base Camp Pendleton, California, and the surrounding communities December 5, doing what they can to keep the holiday spirit alive and giving the children of North County an opportunity to wave to Saint Nick.

Santa’s flight was originally meant to serve as a replacement for an annual event where the squadron brings Santa in to land on the Marine Corps Air Station Camp Pendleton flight line. Measures meant to help mitigate the spread of disease kept them from bringing all of the squadron’s families into one place. So they devised a plan to bring Santa to children both on and off base.

“I think it has been a hard year for everybody, so I think providing some level of normalcy to the families is a good thing,” said U.S. Marine Maj. Andrew Baity, the director of safety and standardization for HMLAT-303. “Personally, my family really enjoys this event, so it was particularly important to me.”

Dressed as Santa, Sgt. William Hinkle, an aerial observer with HMLAT-303, rode in the back of a Venom helicopter as it visited 12 different locations on and off Camp Pendleton, waving to the children and families as they passed below. The locations were preplanned based upon the area in which multiple families could stand and watch the flyover while still being sufficiently distanced from one another.

Based on the positive feedback they’ve already received, the squadron is already looking at doing something similar next year.

“Instead of the generic ‘every squadron does the Santa fly-in’ coming into the holidays, maybe this is a different way to bring Santa to them,” said Capt. Bryen Roder, the aviation safety officer for HMLAT-303.

During this time of uncertainty and stress, enjoying the holidays can prove to be challenging. By bringing Santa to local families, the Marines of HMLAT-303 hope they’ve encouraged people to stay strong and relish in their holiday spirit.