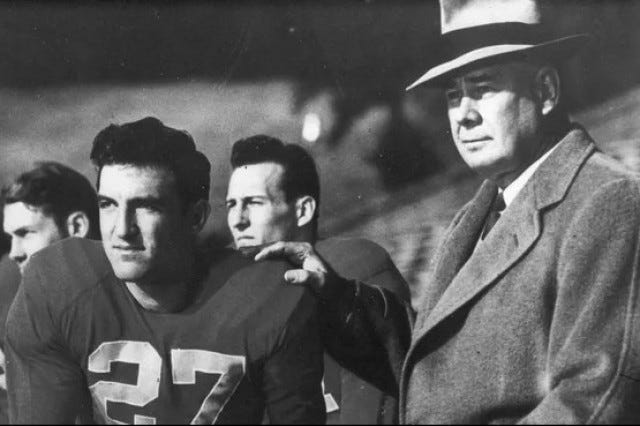 WASHINGTON -- By the time Robert Reese Neyland graduated from the U.S. Military Academy at West Point, New York, in 1916, he had made a name for himself in three sports.

As a lineman for the football team, he helped the Black Knights win the Army-Navy games from 1914 to 1916.

As a baseball pitcher for the Black Knights, he authored a 35-5 record. In 1914, he fired the first no-hitter in Army history when he blanked Colgate.

In boxing, he was an undefeated, heavyweight boxing champion for his final three years at the academy.

Neyland also found time for academics, graduating near the top of his class.

Several professional baseball teams, including the New York Giants, tried to lure Neyland to their teams with big-money offers, but he decided to stay in the Army where he was deployed to Texas as an Army Corps of Engineers officer and helped erect levees along the Rio Grande River.

Neyland then served as an engineer in France during World War I.

In 1921, he returned to West Point as an aide to Army Brig. Gen. Douglas MacArthur, then the academy's superintendent. While there, he also assisted in coaching football, baseball and boxing.

In 1925, Neyland became the head football coach at the University of Tennessee while continuing his military duties as an ROTC instructor.

Neyland's coaching career was disrupted twice — when he was recalled to active duty in 1934 and deployed to Panama and again in May 1941 just before the start of World War II.

In 1942, Neyland was appointed head coach of the Eastern All-Army team that took on National Football League clubs to raise money for the Army Emergency Relief fund. The team played three games, defeating the New York Giants and Brooklyn Dodgers before losing to the defending NFL champion Chicago Bears.

Neyland then served in China, Burma and India, supervising the transport of Allied war supplies across the Himalayan Mountains. He left the Army as a brigadier general in 1946.

In 1946, Neyland resumed coaching at UT, where he earned the nickname "the General."

In 1952, he quit his job as coach and became the UT athletic director for a decade. During that time, he helped to design UT's stadium.

During his legendary coaching career in Knoxville, Tennessee, he compiled an overall record of 173-31-12, winning four national championships and seven conference titles.

Neyland died in 1962. Today, the University of Tennessee football stadium is named in his honor and there's also a statue of him there.