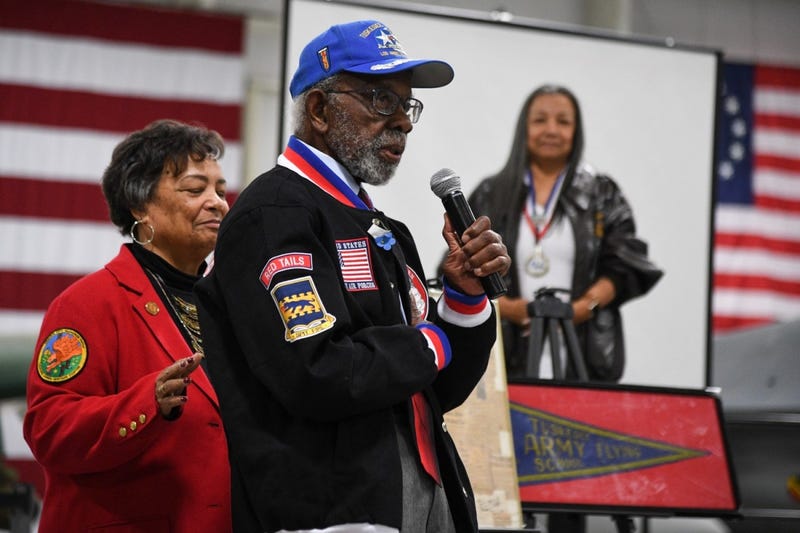 WASHINGTON -- Former Lt. Col. Theodore Lumpkin Jr., a member of the Tuskegee Airmen who helped pave the way for desegregation in the military after World War II, died Dec. 26, following complications tied to COVID-19. He was 100.

Although known for its pilots, Lumpkin’s eyesight kept him out of the cockpit. Instead, he served as an intelligence officer who briefed pilots on their missions.

History remembers the all-Black unit for their pilots, however, the name also applies to the navigators, bombardiers, mechanics, instructors, crew chiefs, nurses, cooks and other support personnel, like Lumpkin.

Born in 1919, Lumpkin, a lifelong Californian, was the oldest of six. He received an associate’s degree in mathematics from the Los Angeles City College in 1940, then continued his education at the University of California, Los Angeles, according to his bio.

On July 1, 1942, the UCLA junior was drafted into the U.S. Army Air Corps. That year, he went to basic training and received radar training at the Tuskegee Army Airfield in Alabama. Shortly after, he attended officer training at Miami Beach Training Center, Florida.

The following January, then-2nd Lt. Lumpkin was assigned to the 100th Fighter Squadron in Tuskegee. From 1944 to 1945, he served a yearlong deployment on the Atlantic front during WWII. In some ways, the young officer came home to little fanfare. 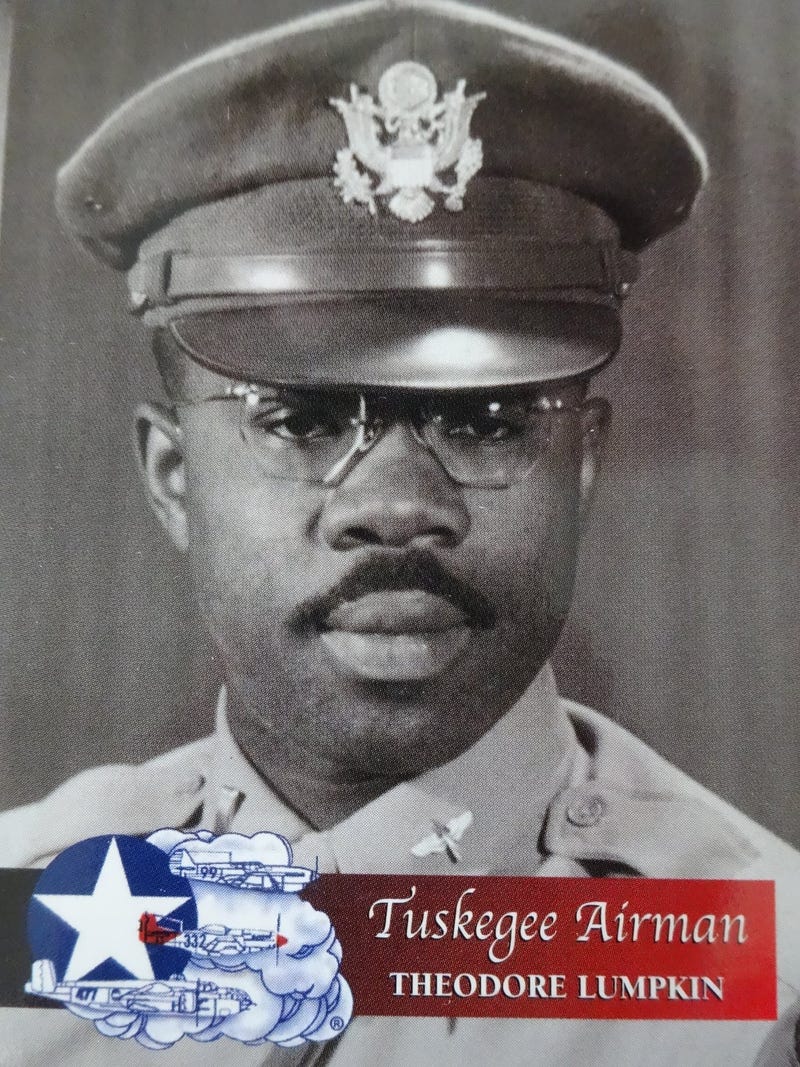 “There was no real recognition that we had been overseas, other than our immediate family and friends,” Lumpkin said, during an Air Force News Service interview in 2014. “It eventually got to the point where most of us just did not talk about the experience at all, because no one really believed you, and it became a secret.”

In early 1946, Lumpkin honorably left active-duty service and moved back to California to join the Army Reserve. He finished his undergraduate education at the University of Southern California, where he also earned a master’s degree.

He retired from the Reserve as a lieutenant colonel in 1979.

“I met Ted about 10 years ago, when he was active in the real estate business, and a member of the group of realtors that I was an accountant for,” said Jerry Hodges, a Tuskegee Airman pilot who was assigned to the 617th Bomber Squadron, 477th Bomber Group.

Lumpkin and Hodges, both longtime Los Angeles residents, didn’t meet on the battlefield or a veteran’s reunion. It was a real estate event. “I didn’t even realize he was a Tuskegee Airman at the time," Hodges said.

A friendship that started in real estate quickly developed, the 95-year-old veteran said in an interview Tuesday. The pair shared a love for jazz music and attended Los Angeles jazz festivals, but it was the military bond that made their friendship stronger.

“We traveled around and talked to young people about the Tuskegee Airmen,” Hodges said. “We educated them on the Tuskegee Airmen -- what they did, and how they did it. Those were the things [we believed] would make them become successful.”

Although Lumpkin is widely recognized for being part of the Tuskegee Airmen, he also served more than 30 years for Los Angeles County, primarily as a social worker, according to USC, where he received a degree in social work. Following retirement, Lumpkin found his second act in real estate.

Despite being retired, the barriers he helped break as one of the Tuskegee Airmen remained a recurring theme in his life. For decades, he stayed involved with the nonprofit Tuskegee Airmen Inc., as both an officer at the chapter level and member of the national board of directors.

In 2007, the Tuskegee Airmen were collectively given the highest recognition awarded by Congress -- the Congressional Gold Medal. Two years later, Lumpkin was one of a handful of Tuskegee Airmen who attended the presidential inauguration of Barack Obama.

That year, Lumpkin also began to serve on the board of directors for the Tuskegee Airmen Scholarship Foundation.

“Tuskegee was a challenge for the Tuskegee Airmen,” Lumpkin said in 2014. “This is important for youngsters to know that they are going to have their own Tuskegee experiences, because those things come up in life.

“But if they do their best, each and every day, the accumulation of that effort will show itself in a positive way in their lives and help them to be better citizens and be more comfortable in their life activity.”

Hodges spoke with Lumpkin from the hospital. “We were told he was doing quite well,” Hodges said. “But the next day he passed.

“It was the first time I cried after losing a friend,” he added. “[Ted] was someone I had very little criticism of. He was a straightforward man. A sincere person with a sense of humor.

“We traveled around together, and I became fond and respectful of him,” Hodges said. “He demanded, just by his actions and way of living, my respect and friendship.”

Lumpkin is survived by his wife, two sons, a daughter, several grandchildren, and a great-grandchild.