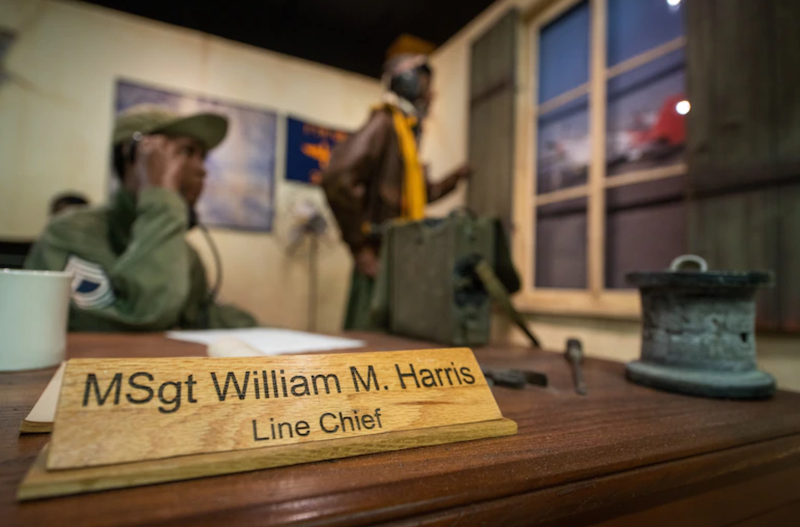 JOINT BASE SAN ANTONIO-LACKLAND, Texas (AFNS) -- Rick Sinkfield is the president of the San Antonio Chapter of The Tuskegee Airmen, Inc., which exists to motivate youth to outstanding achievement and leadership in American society and to preserve the legacy of their role models, the Tuskegee Airmen.

“There’s a significant portion of military history, particularly of African Americans in the U.S. military, which occurred in World War II,” Sinkfield said. “This is very important, as far as civil rights activities in the U.S. as well in the military.”

According to Michael Del Soldato, 37th Training Wing historian at Joint Base San Antonio-Lackland, there were plans to make an African American aviation unit well before World War II, but the Tuskegee Airmen were the first African American aviators actually established in the U.S. military.

The Tuskegee Airmen were not only pilots, they were support personnel as well – weather forecasters, communications professionals, aircraft mechanics, nurses, administrative people, and more. Even though the team was better known for flight, it takes many people to get a plane off the ground.

Founded in 1941 at Tuskegee University in Alabama, the “Tuskegee Experiment” was widely expected to fail because prevailing social winds of the time considered African Americans unfit for the job.

“The Army commissioned a study that said the African Americans were not capable of handling highly technological equipment such as aircraft, so this kind of permeated the thought pattern all the way through World War II,” Sinkfield explained.

Despite the opposition, the pilots set the stage for President Truman to sign Executive Order 9981, which declared that the military would begin full integration of the force, in 1948. Before the Tuskegee Airmen, the armed forces were split along color lines, but African Americans had still fought in many U.S. conflicts – from the Revolutionary War to the Civil War, the War of 1812 and others.

“Men and women of African descent have been fighting for this country since before it was a separate country from England,” Del Soldato said. “During World War I, segregation was still the standard, with African Americans being given secondary rolls in supply and labor forces.”

It took about 15 years for full integration to take effect, Soldato said, but it started with Truman’s executive order in the wake of the success story of the Tuskegee Airmen.

Now, almost 80 years after the inception of the unit, very few Tuskegee Airmen are alive, and the remaining Airmen are in their nineties, but Sinkfield has had the opportunity to meet some and glean insights into their military experience, segregation, racism, and the time period in general.

Relaying an experience involving a member of the press, Sinkfield said Airmen answered immediately when asked if they thought of quitting.

“Their response was, ‘We didn't even know the word ‘quit’; we just kept on going because it was so important to our race; it was so important to the nation, to the people that we're protecting, so we just did not feel like there was any way other than the way to success and excellence,’” Sinkfield said. “That was probably the thing that stood out most in my mind.”

America has come a long way since the 1940s. There are no longer separate water fountains for white people and Black people, nor are there segregated schools, and the working spirit of the Tuskegee Airmen should live on.

Sinkfield said Truman’s declaration of integration was a rule people were required to follow, but it did not change attitudes.

“That was a rule that people had to follow. That was something they did, but that didn’t really change their heart, I don’t believe. And their heart was what you’re trying to get them to change, and understand, and be sympathetic,” Sinkfield said. “That’s what I think we need to be working on socially – getting people to believe that you’re no better than I am, really. We don’t have that kind of 'in your face' racism, but racism is still there in people’s hearts, and we just need to move beyond that.”