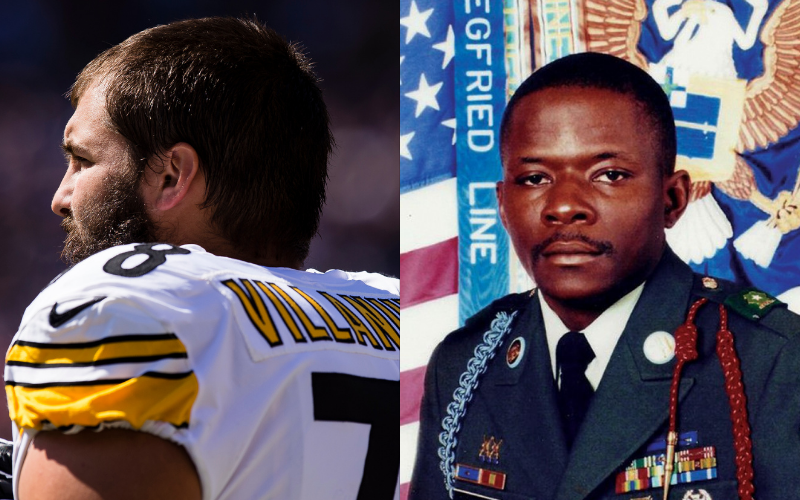 Sgt. 1st Class Alwyn Cashe was on the Pittsburgh Steelers versus New York Giants field on Monday -- on the back of tackle Alejandro Villanueva's helmet.

Cashe was posthumousky awarded the Silver Star for heroism after his death at 35 while on duty in Iraqhttps://t.co/a4Pbp3UERU had said ALL players' helmets would have Antwon Rose Jr's name pic.twitter.com/UMqbxVo6mj

While the rest of the Steelers team wore the name of Antwon Rose Jr., a 17-year-old who was shot and killed by East Pittsburgh police after fleeing during a stop in 2018, Villanueva wore Cashe's.

Cashe sustained fatal burns while acting to save fellow soldiers in Iraq in 2005. Members of Congress, Cashe's family, and others have advocated for Cashe's Silver Star to be upgraded to a Medal of Honor. He would be the first Black service member to receive the award for actions during the Global War on Terror.

Villanueva served three tours in Afghanistan as an Army Ranger and received several medals for his service, including the Bronze Star.

Villanueva has diverged from his team before in a similar way. In 2017, Villanueva garnered national attention his entire team declined to stand on the field for the pregame playing of the National Anthem -- he alone stood at the entrance to the team tunnel with his hand over his heart.

At the time, Villanueva, Tomlin, and the team said the solo stand was accidental.