The 2020 Emmy Awards are this weekend, and if previous years’ Emmys are any indication, there will be plenty of off-color moments to buzz about when you’re back at the office on Monday morning.

Not that that’s a bad thing. Cringe-y moments are a blessing, keeping viewers on their toes during what might otherwise be stuffy ceremonial proceedings.

So take a break from binging this year’s incredible nominees and walk down memory lane. To get your blood boiling in eager anticipation for this year’s show -- which airs this Sunday, Sept. 20 at 8 p.m. ET on ABC -- we’ve put together some of the most salacious, outrageous, contentious, clumsy and shocking Emmys moments of all time.

Elegant, classic, Shakespearian-trained... and not afraid to let them words fly! While accepting her award for Best Actress in a Mini Series or Movie in 2006, the English actress said, "My great triumph is not falling over a$$ over t-ts as I came up those stairs." You can hear the surprise in the crowd's slow eruption of laughter. For her part, she played it neat, letting out a charming, coolly-composed laugh. The most baller part of this one was that it all happened too fast for the show to bleep out. 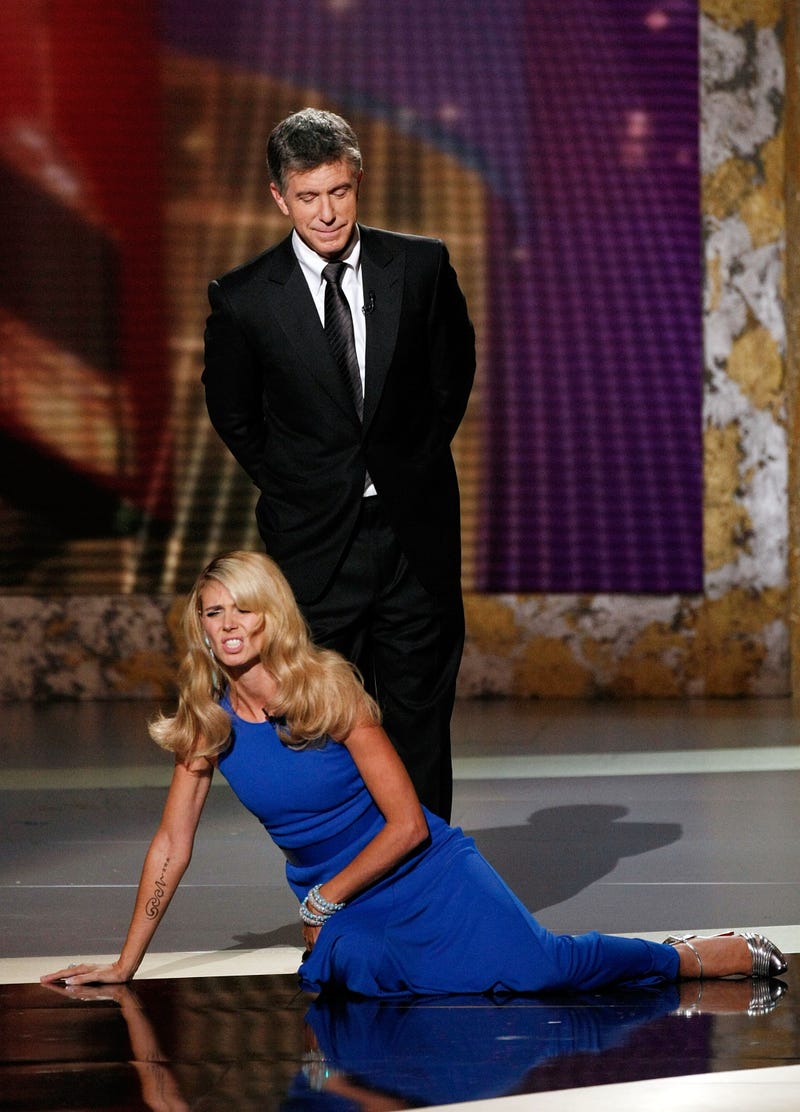 Heidi Klum bruised her butt in 2008

Mirren's not the only one who's had technical difficulties on the Emmys stage. Hosting is harder than it looks! At the 60th Primetime Emmy Awards, Heidi Klum took a tumble during an unrehearsed routine where she swooned into the arms of her cohost Tom Bergeron. The bit went south fast when the "Dancing With the Stars" host dropped her. After the show Klum lifted her blue dress to show off her unexpected party favor -- a big bruise on her butt.

Julia Louis-Dreyfus and Bryan Cranston made out in 2014

"Seinfeld" fans who wanted to see more Elaine-dating-the-dentist plot lines had their prayers nearly answered during the 2014 Emmys. While making her way to the stage to accept the award for Outstanding Lead Actress in a Comedy Series, Louis-Dreyfus took a detour when Cranston hopped out of his seat and planted a long kiss on her, payback for a joke she made earlier about not remembering him. "Yeah yeah, he was on 'Seinfeld,'" she joked on the podium.

This one is a rarer fan fantasy: What if Chandler dated Raymond's mom? When Doris Roberts got on stage to accept the Best Supporting Actress award for her role in "Everybody Loves Raymond," Matthew Perry got extra "Friend"-ly with her and planted a firmly-held smooch. "Wow," she said with a smile. "That was worth coming up here for."

An interaction like this -- so hilarious but legitimately awkward at the same time -- is only possible by two deadpan masters like Ricky Gervais and Steve Carrell. In 2007, Gervais won an Emmy that Carrell accepted in his absence. At 2008's show, the British "Office" star came with some serious heat for the American "Office" star, taunting him ("I made you what you are"), bullying him (tickle-poking him and asking "Where is it?"), and then finally grabbing the award out of Carrell's reluctant hands.

Kirstie Alley thanks the "one"

This one is big time TMI. When she accepted her Emmy for Outstanding Lead Actress in a Comedy Series, Alley thanked her then-husband Parker Stevenson for being "the man who has given me the big one for the last eight years." Stevenson looked on and gave a calm, knowing "She ain't lying" kind of smile. Respect brother. The funniest part of this one is that Macaulay Culkin, who was 11 at the time, presented her with the award.

When Alexander Skarsgard won an Emmy for Best Supporting Actor in 2017, he got something even better than a gold statue -- a kiss from "Big Little Lies" costar Nicole Kidman. "That was pretty cool," he said when he got on stage. The jury is still out on whether Keith Urban, who was right there for the smooch, said the same thing.

"You lost but now you gotta stand out here in front of everybody," Matt Damon told Jimmy Kimmel after Kimmel lost an Emmy he was up for the same year that he hosted the show. The feud between the two started with a hilarious Jimmy Kimmel Live video, a song by his then-girlfriend Sara Silverman called "I'm F------ Matt Damon." By 2016 Silverman was out of the picture, but the feud between Kimmel and Damon had taken a life of its own, from late night to primetime.

The 2020 Emmy Awards are hosted by Jimmy Kimmel. They virtual ceremony will air on Sunday, Sept. 20 at 8 p.m. ET on ABC. Download the RADIO.COM App for live updates and coverage.