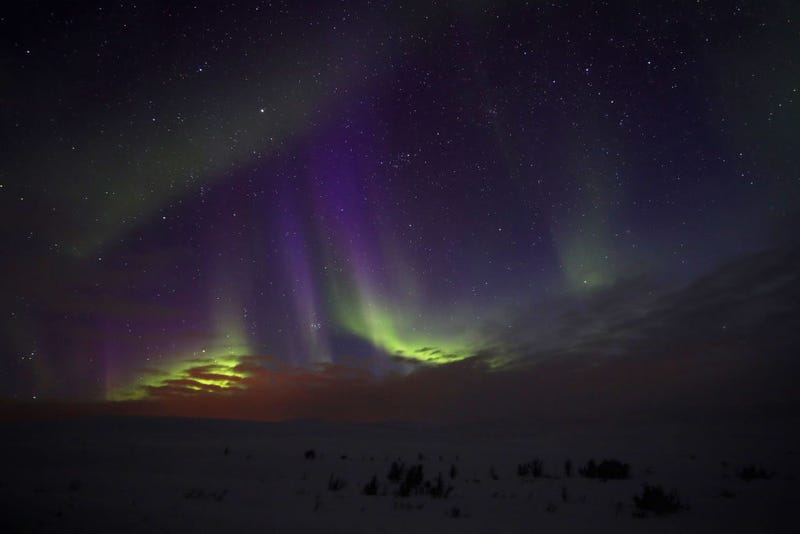 PHILADELPHIA (KYW Newsradio) — A geomagnetic storm is coming to Earth from the sun on Thursday that could potentially have an effect on everything from appliances to satellites to making the northern lights visible in places that would normally never see them.

So what is a geomagnetic storm?

"The idea is that there is basically an explosion on the sun that throws off a bunch of material that hurls through space, takes days to reach the Earth, and then that can yield a 'storm' of highly charged particles that can interact with Earth's magnetic field. It could affect our power grid, it could affect satellites," explained Dr. Eric Jensen, professor of astronomy at Swarthmore College. "It's not a storm like rain, but it's a storm of electrons. Charged particles that were spewed out by the sun in one of these explosions, in a solar flare."

"These things happen all the time, small ones," Jensen says. "Sort of like earthquakes. There's always little earthquakes going on, but you don't notice them unless they're big."

One thing that makes this storm noteworthy is that for the past several years, the sun has been pretty quiet.

"Hardly any sun spots, hardly any of these solar flares. And we're just starting to come out of it, and so I think it's the first one we've had in a while and so it's caught people's attention a bit more,” he said.

While this particular geomagnetic storm isn't expected to be overly significant, the sun's astronomical capability to put out energy is closely watched by scientists and governments on Earth.

"It's sort of like a big electric current flowing through space," Jensen explained. "That, when it reaches the earth, has a potential to have an effect on satellites, it could knock out a satellite. It wouldn't literally knock it down, it's not something that could push on it, but it could fry some of the circuits."

And these storms have a history of interacting with power grids on Earth as well. In the late 1980s, Jensen said, a big geomagnetic storm knocked out a large part of an east coast power grid.

“This one's probably too small to do anything like that, but that's the reason people pay attention to these things and try to track them,” he added.

It's not all bad news though. Space weather can have some really beautiful side effects.

"These particles get funneled by the Earth's magnetic field and come into the Earth's atmosphere towards the North Pole and the South Pole, and it's what causes the northern lights and the southern lights," Jensen says. "So one thing that goes along with these storms is much brighter northern lights, or what's called aurora borealis. So there's a potential for people a little farther south than would normally be able to see them to see nice displays of the northern lights."

In Philadelphia, the skies are probably too bright to see this particular light show. But places with less light pollution or a little farther north might have a chance to see the northern lights on Thursday evening.