The season is saved. Now it is up to Howie Roseman to bring in reinforcements.

The NFL trade deadline is now two days away, which means Roseman’s window to make a move to improve this roster will expire Tuesday at 4 p.m. EST. After that, the Eagles will take on the rest of their schedule, and try to make a push for the playoffs, with the players currently on their roster.

There are all types of things of things for Roseman to consider when making a move. He has around $22 million in cap space, near the top of the league. He is projected to have 10 draft picks in 2020, giving him plenty of ammunition to make a deal with. He also has plenty of needs on the roster, starting on offense at wide receiver, and on defense as well at multiple positions.

So who could Roseman make a move for?

Here are 10 big-name players the Eagles could make a move for — and the most I would trade to get a deal done:

Robby Anderson, WR, New York Jets: Anderson, 6-foot-3, 190 pounds, has been one of the better deep threats in the league since he entered it in 2016, with a career average of 14.8 yards per reception. He is averaging a career-high 15.6 yards per catch this year despite playing most of the season with a group of terrible quarterback. Considering the issues the Eagles have had stretching the field, and with DeSean Jackson’s return still a mystery, Anderson would be a player that would help them both now and in the future. He would fill the team’s biggest current need — speed on offense — and even if Jackson did come back the Eagles could get creative with both on the field. Anderson is a free agent at the end of this year, however, which could complicate things. It is also almost a guarantee that Alshon Jeffery and Jackson will be back in 2020 because of their contracts. Bringing in Anderson is by no means a no-brainer, but it is a move Roseman will definitely consider.

Most I would trade: 3rd Round Pick

Josh Norman, CB, Washington Redskins: Norman is a new name on the trade block and an interesting one — but not the name he used to be. Norman has struggled since signing with Washington and is not the shut-down cornerback he used to be. Is he better than some of the cornerbacks on the Eagles roster? Maybe. Probably. But he is not a sure-thing upgrade. The money could be a factor, as Norman would have a cap hit of around $5 million this year and is on the books for $12 million in 2020. The Eagles could release him and get out of all that money, however, after this season if they wanted. If the Eagles did bring in Norman it is hard to see them giving up any draft pick of value.

Most I would trade: I would not trade for Norman.

Leonard Williams, DT, New York Jets: This is a name that Eagles fans should become very familiar with. The need at defensive tackle is perhaps the biggest on the team, as they are now without three of the four defensive tackles they came into the season with. Williams would be a clear upgrade over the defensive tackles that played next to Fletcher Cox on Sunday in Buffalo and at just 25-years old he could be a long-term fix as well. The issue is Williams is a free-agent after this season, so there would be pressure to sign him if they did give up anything of value to get him.

Most I would trade: 3rd Round Pick

Von Miller, EDGE, Denver Broncos: Trading Miller is a move that would signal a rebuild for the Broncos, a process they might not want to start, but one they need to start as soon as possible. Trading Miller would save them significant cap space over the next few years, as he is under contract through the 2021 season. For the Eagles, Miller would give them an immediate threat on the defense, an edge rusher that opposing offensive lines would have to worry about and gameplan for. They don’t have that right now. Miller’s deal is expensive, as he is set to make $17.5 million in base salary each of the next two seasons. For a player like Miller, however, that is money well spent — and would change the Eagles’ defensive line from a question mark to a strength.

Most I would trade: Two second-round picks

DeVante Parker, Miami Dolphins: Like Sanders, the Eagles have been linked to Parker in the past. Parker is actually having a semi-decent season for the Dolphins, averaging 15.8 yards-per-catch, which is impressive by itself, but even more impressive when you consider the quarterbacks he has played with. Parker has good size at 6-foot-3, but is also pretty quick and could be a deep threat if needed. Parker would cost the Eagles around $1.7 million this season and is under contract for $4.4 million in 2020, a good bargain for a player with a ceiling as high as Parker’s.

Most I would trade: 5th Round Pick 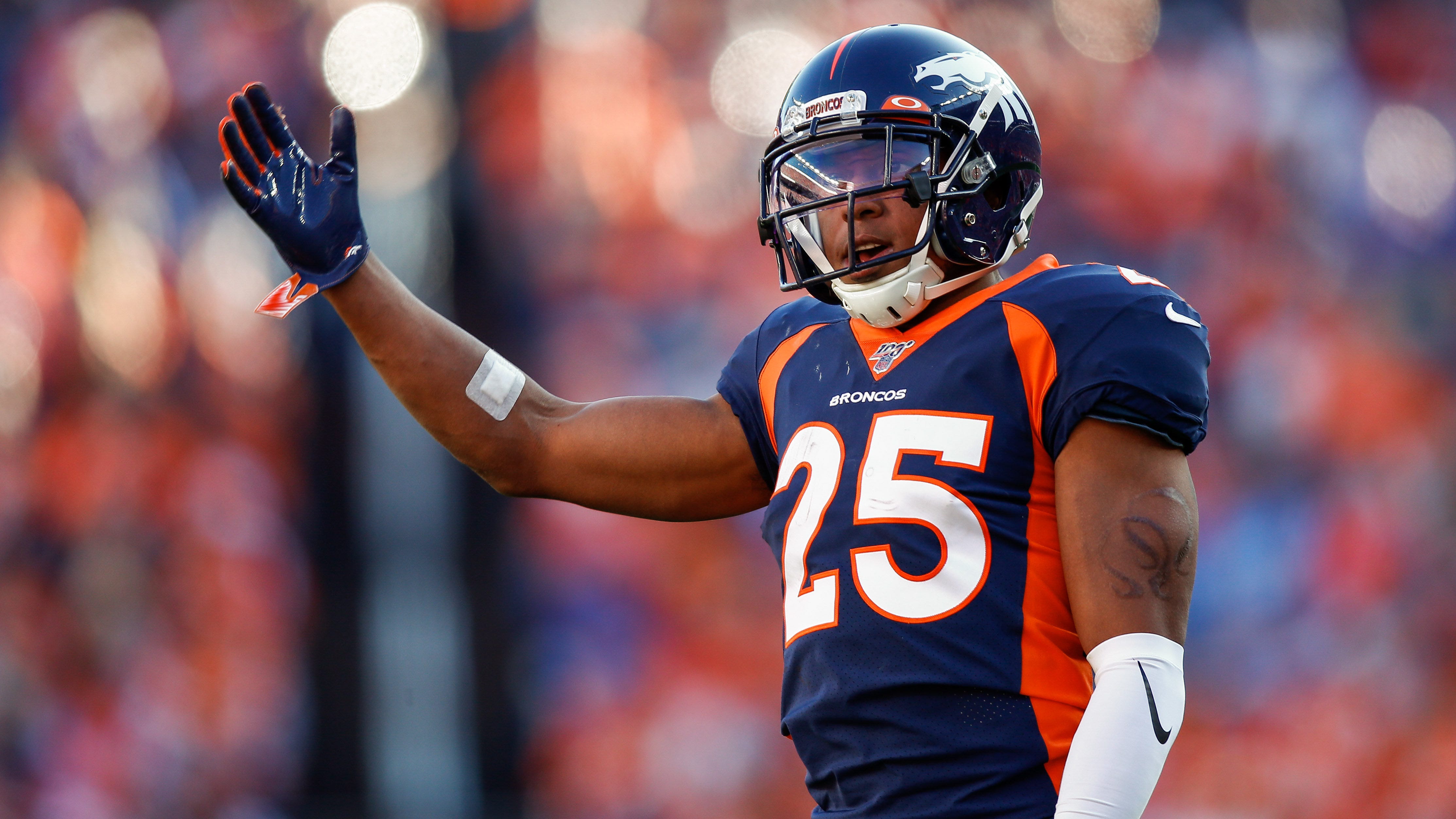 NFL Trade Rumors: 5 Veterans That Could Realistically Be Traded

Keenan Allen, Los Angeles Chargers: The Chargers season has not gone as planned as they sit at 2-5 through seven games. Considered a potential Super Bowl contender before the season, it is possible they decide to sell at the deadline, and if they do the Eagles should call them about Allen. Just 27-years old, Allen is one of the best route runners in the league and has the speed to get deep when needed. He would count around $5 million against the cap this season and $10 million next season, but could be cut this offseason if needed with minimal cap damage. The price to land Allen will not be cheap, but he would offer an immediate, no-doubt impact the passing offense desperately needs.

Most I would trade: 2nd round pick

Chris Harris, CB, Denver Broncos: This is a player that has been rumored to be on the move for some time and the Eagles have been tied to, and it is easy to see why. Harris has the ability to play both inside-and-outside at cornerback, which given the Eagles’ current situation in the secondary, is critical. The Eagles could line Harris up in the slot until Avonte Maddox is healthy, and then bump Harris outside to play next to Jalen Mills. Like Williams and Anderson, Harris is a free agent after the season, however. That might lower his price tag but it also complicates things for the offseason, when Mills and Ronald Darby are also free agents.

Melvin Gordon, RB, Los Angeles Chargers: The Eagles reportedly made an offer for Gordon prior to the start of the season, an offer that apparently involved running back Jordan Howard. Howard has been a pleasant surprise for the Eagles, but is a free agent at the end of the season. If the Eagles believe more in Gordon long-term than they do Howard they could revisit the trade.

Vic Beasley, EDGE, Atlanta Falcons: Beasley made a name for himself in 2016 when he led the NFL with 15.5 sacks. Since then, however, Beasley has totaled just 11.5 sacks in his previous 37 games and the chances of him becoming the player he was in 2016 ever again feels slim. Perhaps a change of scenery could bring that change, however, and the Eagles could decide taking a flyer on the ultra-athletic defensive end.

Patrick Peterson, CB, Arizona Cardinals: Peterson has long been viewed as one of the best cornerbacks in the NFL, but is still just 29-years old, and is actually on a pretty team-friendly contract. Peterson’s salary for the 2019 season is $11 million, but would only be around $8 million on the Eagles’ books if they traded for him prior to next week. If they dealt for him right at the trade deadline, which is the last day of the month, it would be even cheaper. Peterson’s 2020 salary is $12.5 million, with almost none of it guaranteed. It is unlikely the Eagles would cut Peterson this offseason after trading for him, but his contract would allow them to re-work the deal, extending him and signing him to a deal with a lower cap hit. With the Eagles currently having around $25 million in cap space, the financial part of the team shouldn’t have a big impact on the Eagles’ potential desire to acquire Peterson.

Most I would trade: 2nd round pick