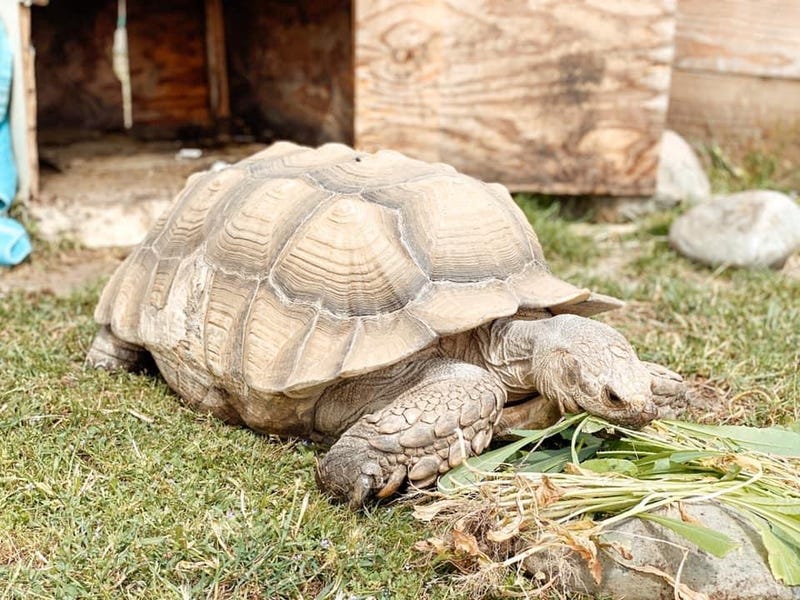 An exotic animal sanctuary in Newcastle is mourning the loss of some of its animals after its barn caught fire.

Sanctuary owner and founder Melyssa Descovich shared the news in the Facebook group for The Enchanted Forest on Sunday. The news comes as a shock and devastation not only for the sanctuary, but for the community of people that would visit the sanctuary weekly as an escape from the realities of the pandemic and comfort through animals.

When I first learned about the sanctuary last summer, it was mainly a tortoise rescue. Through the pandemic, there was a growing need for a sanctuary that catered to all sorts of animals. Melyssa, as well as Brian Aipperspach were more than happy to welcome an array of animals to their sanctuary, from ducks and geese to ostriches, parrots, an iguana, goats, and other animals that needed a new home.

On Monday, Melyssa shared with us which animals in the barn were lost via a Facebook post in the sanctuary's group:

"We lost all of the tortoises that lived at the sanctuary. The only tortoise that made it was Axl the Galapagos Tortoise because he was home with us in Colfax for the winter.

Ophelia the tortoise passed but not before laying all her eggs beside her in an effort to save her babies.

All of our baby chicks passed

Momma Rosey passed doing what she is was passionate about, protecting all of the baby ducklings she had with her in her nest. Her ducklings passed too

Rusty the iguana broke out of his cage and crawled to a sheriffs deputy covered in burns over 80% of his body. The deputy held him and he passed shortly after."

Melyssa explained that normally they keep the ostriches, geese, and ducks in the night aviary at the barn, however, in an "unusual change of routine," she chose to leave them out amongst the barn animals rather than "tuck them in." They all survived.

"Three of the four pigs jumped over the pig pen and escaped," she continued. "The last pig, Charlie, stayed as far away from the barn as she could, against the walls of her cage, and she survived."

Goats "Baby Kay" and "Growly Pete," the parrots, and Penelope the peacock were at a different location and survived, as well.

Currently there is not a GoFundMe, but there are other ways you can donate to the sanctuary, whose nonprofit number is 85-4037919: