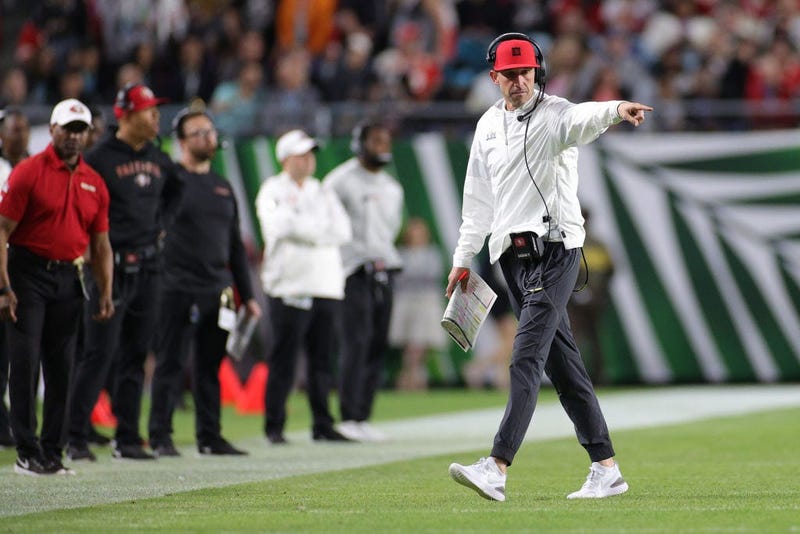 The reporters, analysts and fans have continued to criticize Kyle Shanahan for not using his timeouts at the end of the first half of the Super Bowl properly and claiming that error in strategy was the reason the 49ers lost the Super Bowl. Almost immediately, pundits began comparing the loss to the collapse the Atlanta Falcons suffered in Super Bowl LI when Kyle Shanahan was the Offensive Coordinator.

While it is true that the Niners where shutout in the fourth quarter in Miami, there were more factors in play than just an offense that could not score in the final seconds of the first half.

The Niners “D” broke down

With 8:53 to go in the game, the Chiefs went into their “hurry up” offense and the 49ers defense did not adjust. On that first up-tempo drive, Kansas City scored a touchdown after driving 83 yards on 10 plays in just 2:40 to make it a 20-17 game in favor of SF.

The Niners went three and out (you can put that on Shanahan) and KC took the over at their own 35- yard line after the punt.

It took the Chiefs just 2:26 to march 65 yards on seven plays to score their second TD of the fourth quarter and take a 24-20 lead.

After the Kansas City defense stopped the Niners offense with a fourth down sack of Garoppolo, the Chiefs needed just two plays to go 42 yards and score their final touchdown of the game.

“That’s what people will remember. That’s the world we live in. You’ve just got to own up to it & be a man about it. It will fuel us this offseason. It will fuel me especially, to come back better.” 💯 💪 pic.twitter.com/cc8oGDI7GN

Things that make you go hmmmm:

If you want to put Kyle Shanahan’s head on the chopping block for the loss to the Chiefs, you must have Defensive Coordinator Robert Saleh line up right behind the head coach because his much-heralded defense “choked in primetime” at Super Bowl LVI.

Everyone underestimated the KC defense

Ray Ratto of our Damon, Ratto and Kolsky ESPN 1320 afternoon talk show pointed out that all of us who were providing pregame analysis just underestimated the Chiefs defense. Almost every pundit predicted that the KC defense would not be a factor and might well be their undoing.

The Chiefs defense held the 49ers to just 141 yards on the ground as opposed to the 285 rushing yards SF racked up versus the Packers. Yes, the Niners attempted less rushes, but that may have been in part to the effectiveness of the Chiefs defense in stopping the SF running backs.

The Niners did not just lose the game. San Francisco was defeated by the better team on both sides of the ball.

Shanahan and Saleh are not “bums”

Yes, the 49ers lost on Sunday. No, it is not time to clean house and start over from scratch. The Niners have built a solid foundation that will provide fans with a competitive and entertaining team for years to come.

Will the Niners be back in the Super Bowl in 2021? The odds say no. Will they be exciting and fighting for the NFC Championship? Yes, they will without a doubt.

“It’s not guaranteed that you’re gonna be there next year.”@JerryRice says the #49ers have a long road ahead if they want to make it back to the Super Bowl pic.twitter.com/U7y4jp09wB