The College Football Playoff National Championship game will be sure to feature plenty of future NFL stars between Alabama and Ohio State on Monday night.

In fact, since 2000, Ohio State and Alabama each had 31 players selected in the first round of the NFL Draft – tied for the highest mark of all college football programs in that span.

So, on Monday, many casual NFL fans will be getting the chance to watch a ton of future NFL talent that could be playing for their favorite team next year.

Below are the potential first-round picks to watch in the 2021 College Football Playoff National Championship: 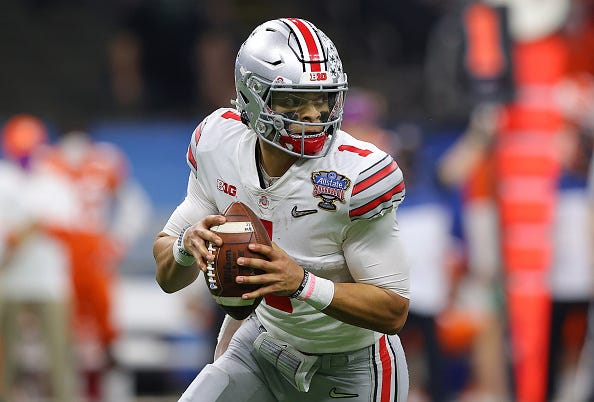 Fields had his breakout game in the Sugar Bowl on New Year’s Day when he outplayed projected No. 1 overall pick Trevor Lawrence by throwing six touchdown passes and completing 22 of 28 passes for 385 yards in a 49-28 upset win.

The Ohio State quarterback has cemented himself as the No. 2 QB in the draft behind Lawrence and if he adds a national title to his resume, teams will be calling the New York Jets for the No. 2 pick, or perhaps the Jets have some inward thinking to do themselves. 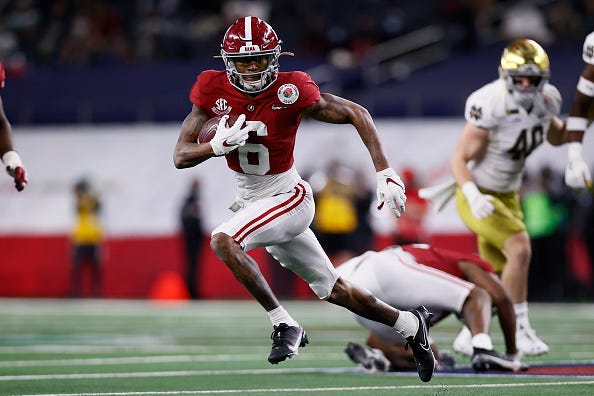 Any team drafting in the top 10 that needs a wide receiver – Philadelphia Eagles, we’re looking at you – will be watching Smith closely on Monday night. Smith became the first wide receiver to win the Heisman Trophy in 29 years and for good reason.

He recently tied a Rose Bowl record with three touchdowns and tied an SEC record 20 receiving touchdowns, which was set last year by LSU's Ja'Marr Chase, although Smith did it in two fewer games. He had eight games with 100-plus receiving yards – an Alabama record – and finished with 105 receptions. 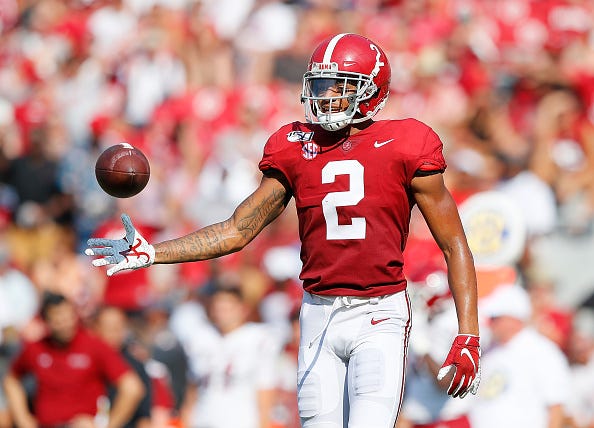 Surtain, whose father played for the Dolphins and Chiefs, has been an anchor in Alabama’s secondary all year, leading the team with 11 pass breakups. His physicality makes him a tough matchup for wide receivers and his one interception this season was returned for a touchdown. Surtain is projected in most mocks as the No. 2 defensive back off the board. 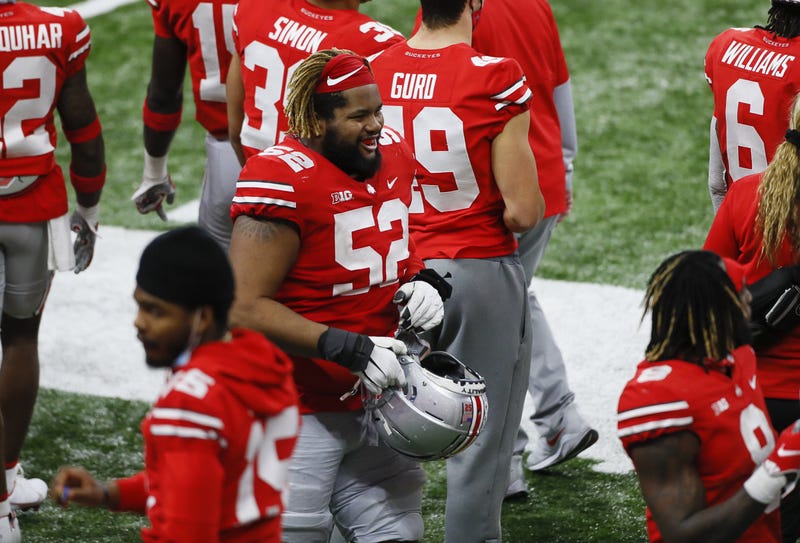 Davis, a 6-foot-5, 310-pound guard, is a consensus first-team All-American and the Big Ten Offensive Lineman of the Year – an honor that went to first-round pick Tristan Wirfs last year. Davis hurt his leg in the Sugar Bowl vs. Clemson, but managed to return to action, a positive sign moving forward toward the championship game, which the Buckeyes will need as Davis has paved the way for a prolific rushing attack. 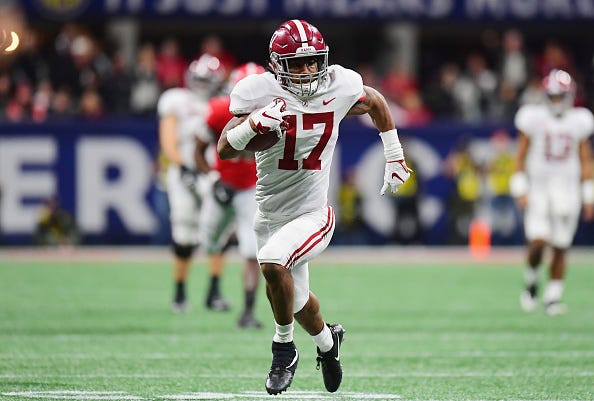 We have not seen a whole lot of Waddle this year, as he has been sidelined with an ankle injury since late October, but he has been cleared to return for the championship game and could bolster an already dangerous receiving corps for Alabama.

While checking in slightly smaller than Smith at 5-foot-10, 182 pounds, Waddle is a playmaker. Before getting hurt, he had recorded at least 120 receiving yards in his first six games, tallying four touchdowns and 25 receptions – including a 90-yard TD in a win over Georgia. Waddle’s injury did not seem to hurt his draft stock and the Crimson Tide wideout could not be returning at a better time. 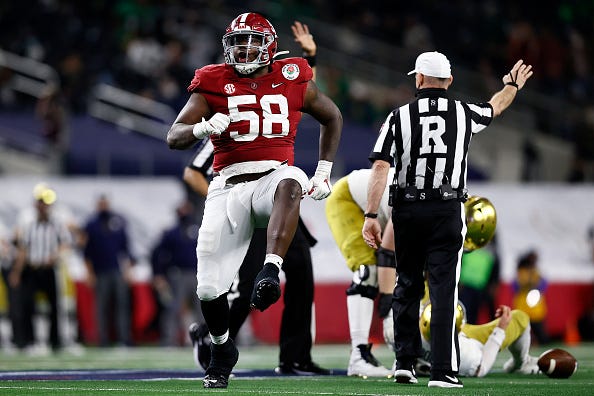 Barmore is one of the top interior defensive linemen to likely be headed to the draft and has shown to be a disruptive force in the backfield. He has played arguably his best football of the season in his last two games, recording five tackles in each game and a sack in the Rose Bowl win over Notre Dame. 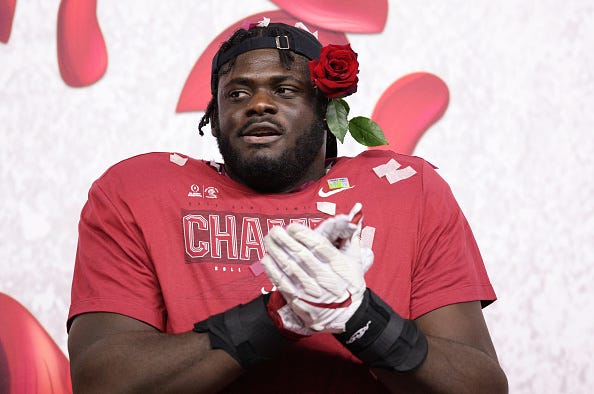 Leatherwood, a 6-foot-6, 312-pound tackle, was a five-star recruit who has helped protect Mac Jones’ blindside throughout the season, giving the QB the protection needed to put together a Heisman campaign. 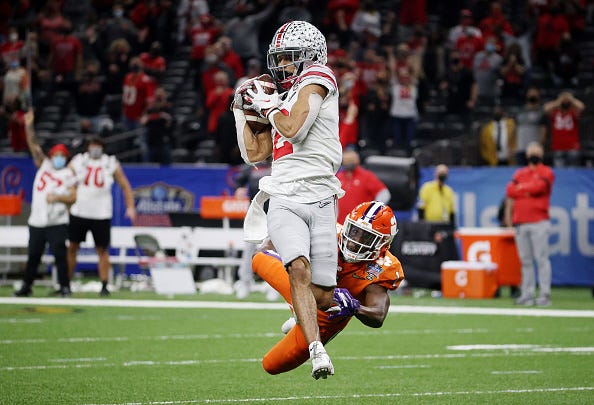 Olave is another borderline first rounder, but has proven to be a big playmaker down the stretch for the Buckeyes this season, recording at least 100 yards receiving in five of Ohio State’s six games, including his last three. He caught six balls for 132 yards and two touchdowns against Clemson. He faces a big test in matching up with Surtain, but Olave could boost his stock and be an intriguing option for teams picking in the late first round. 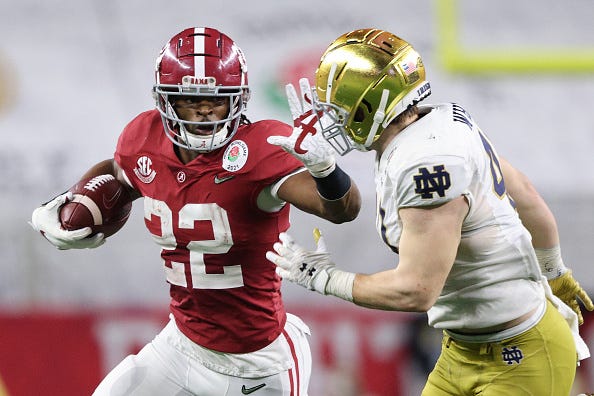 Harris is the clear-cut second-ranked running back in the 2021 NFL Draft behind Clemson’s Travis Etienne, but the question is if Harris can put himself over the edge as a first rounder. The Crimson Tide running back averaged 6.1 yards per carry and his 1,367 rushing yards led the SEC. He nearly doubled his touchdown total from last year, going from 13 to 24 and looks to follow the success of Saban-era Alabama running backs in the NFL. 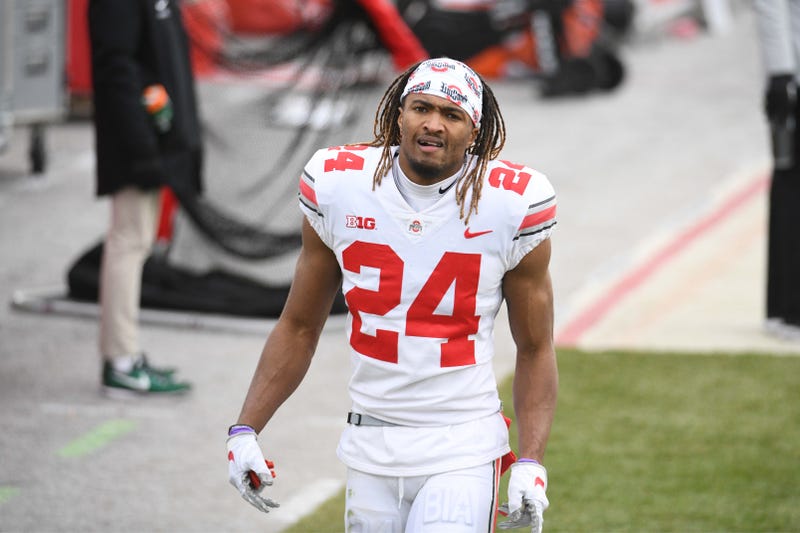 Wade’s draft status has taken a bit of a hit this season as he’s struggled from moving from the slot to the outside. He will certainly be tested against Alabama’s receivers, particularly Devonta Smith, in the national championship. The question for Wade is can he show enough to convince scouts he is still the highly touted first-round pick many projected him to be prior to the season?