The NFL QB carousel offseason is only getting started and is expected to keep spinning through the NFL Draft in late April.

Among the most coveted QB draft prospects is Justin Fields out of Ohio State.

Fields, 21, was a two-year starter for the Buckeyes after transferring from Georgia, tossing 63 touchdowns to nine interceptions in 22 games while leading Ohio State to two Big Ten titles and a Sugar Bowl victory while falling short in the 2020 national championship to Alabama.

Fields’ performance in the Sugar Bowl caught everyone’s attention as the quarterback gutted through a rib injury while tossing six touchdowns for 385 yards and rushing for another 42 yards on eight carries in a 49-28 win over Clemson.

Many have regarded Fields as the No. 2 best quarterback in the draft behind Lawrence, although other prospects such as BYU’s Zach Wilson and North Dakota State’s Trey Lance have seen their stock rise in recent weeks, painting a murkier picture around Fields.

Nonetheless, teams drafting in the top half of the draft will be looking at Fields closely as he has the potential to be a franchise quarterback and future star in the NFL.

Here is a look at the potential fits for the Buckeyes QB: 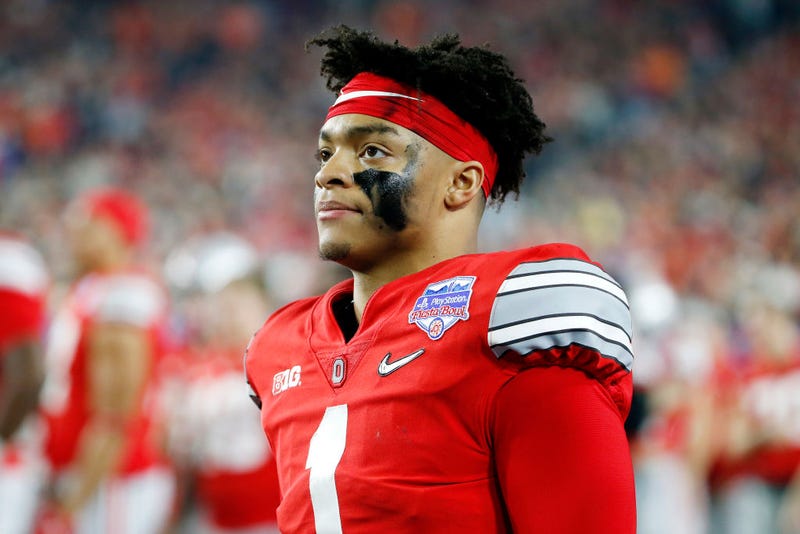 The Jets are going to be one of the most intriguing teams to watch in the coming weeks. What they decide to do with Sam Darnold will ultimately be an indication of what they plan to do with the No. 2 pick in the draft. They could trade Darnold and swing a deal for someone like Deshaun Watson, or they could evaluate Fields and make a decision on if their future is better off with Darnold or the Ohio State QB.

It could very well be the latter. There’s a new regime in town with Robert Saleh as head coach; even GM Joe Douglas has no connection to drafting Darnold. They may want their own guy to build a team around as they try to pull the Jets out from the dregs of the AFC East.

Fields’ gutsy performance in the College Football Playoff semifinal certainly caught the attention of Jets fans at the time and his dual-threat capabilities would give new offensive coordinator Mike LaFleur the chance to build a dynamic offense around him. 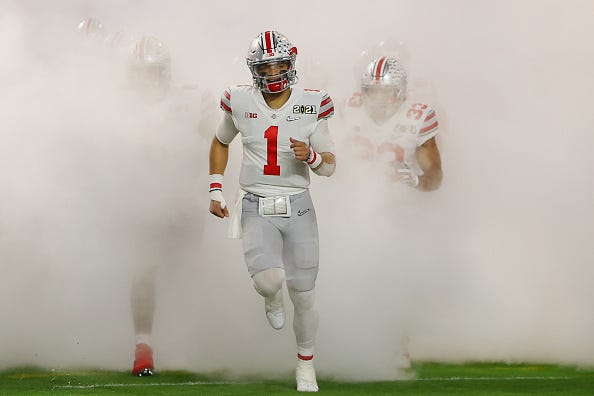 This is an interesting scenario. The Falcons plan to stick with Matt Ryan in 2021, but they could save about $15 million in cap space if they cut or trade him in 2022, leaving room for a potential quarterback-in-waiting situation.

NFL Network’s lead scout Daniel Jeremiah speculated the Falcons as a possibility for Fields as someone who can spend the year developing behind Ryan before taking over in 2022. We have seen this strategy work in the past, most notably with Patrick Mahomes sitting a year behind Alex Smith in Kansas City.

Like the Jets, the Falcons also have a new regime running things and would like to get their hands on a future franchise quarterback to build around. Fields is a Georgia native and starred at Harrison High School north of Atlanta. It would be a homecoming of sorts for Fields and a place where he would be given some time before being thrown into the fray of the NFL. 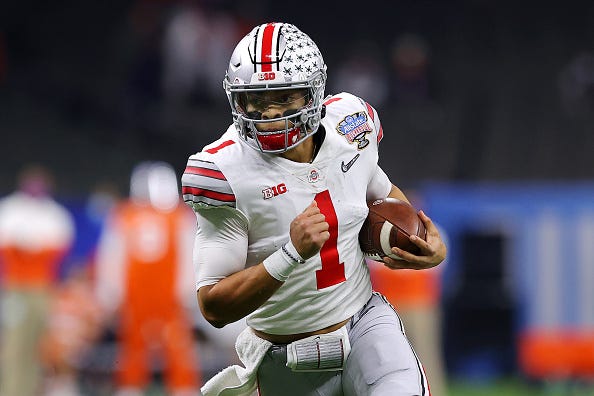 Just because the Lions traded for Jared Goff does not exclude them from drafting a quarterback. The Lions are in a total rebuild mode, so finding a franchise quarterback in the draft still makes sense for them. Plus, Goff has been average at best over the last two seasons and his contract is very moveable following the 2021 season.

It is actually quite similar to the situation in Atlanta, with a new head coach and GM and a veteran quarterback whom Fields can learn behind for a year. Even prior to the Goff trade, the talk in town was that the Lions should target Fields. They are drafting at No. 7 overall, though, so they may need to trade up if they believe Fields is their franchise quarterback. 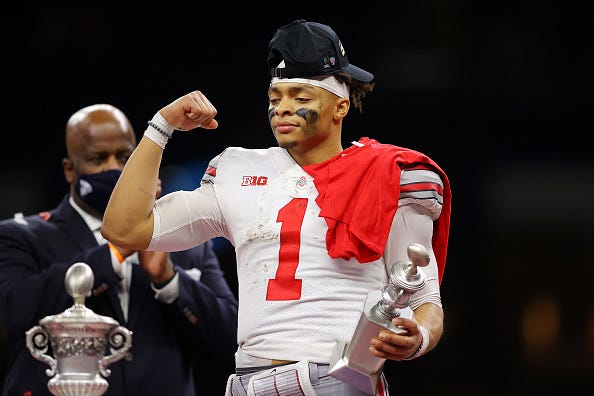 The Carolina Panthers do not seem to think Teddy Bridgewater is the answer at quarterback. They were reportedly interested in Matthew Stafford and have recently been linked to the Deshaun Watson madness. Of course, the Panthers could turn to the draft to find their next franchise quarterback where they hold the No. 8 overall pick.

There have already been reports that the Panthers “love” Fields while they simply “like” Alabama’s Mac Jones. It’s easy to envision Fields in a Panthers uniform as he resembles Cam Newton in stature and ability. 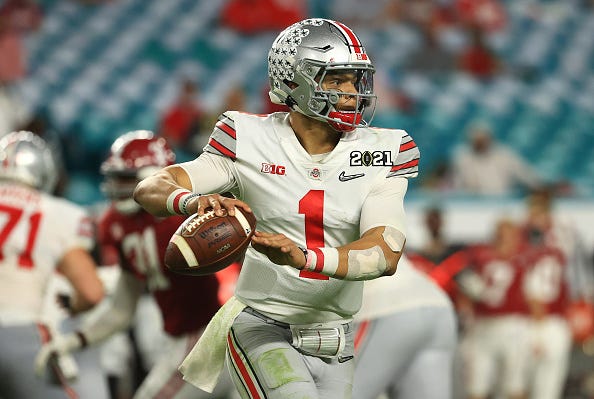 While Jimmy Garoppolo’s future remains the million-dollar question in the Bay Area, his contract makes it very easy for the 49ers to cut ties with him if they decide they want to move on. One of those options could be Justin Fields.

Plugging Fields into a Kyle Shanahan offense would be fun to watch. The last time Shanahan had a true dual-threat quarterback was during his tenure as offensive coordinator in Washington with Robert Griffin III.

We’re not suggesting Fields has RGIII speed, but Shanahan has been mostly limited with pure pocket passers since leaving Washington. Bringing in Fields could take the Niners’ offense to the next level. The Niners have the No. 12 pick in the draft, though, so Fields would either have to fall or they would need to move up to get him.