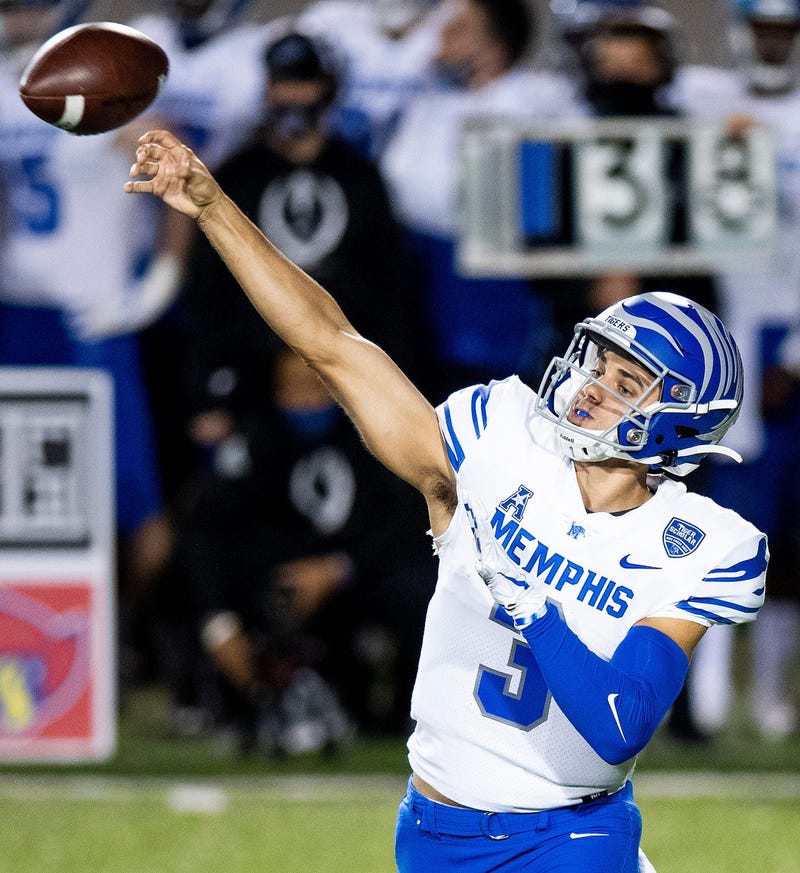 The Campbell Trophy, commonly known as the Academic Heisman, is presented to the college football player with the best combination of academics, community service and on-field performance. White will be officially presented the award during the 90-minute virtual Home Depot College Football Awards show on Thursday at 6 p.m. CT on ESPN.

“My time here at Memphis has been so special,” White said. “The football accomplishments speak for themselves, but I also hope I am walking out of here having positively impacted people in this city by giving them hope, excitement and joy. I also hope I helped establish what the culture is on this team, and I can’t wait to see that carried out over many years to come. I’ll bleed blue for the rest of my life. I’m a Memphis Tiger forever.”

During the 2020 season, White set career school records in wins as a starting quarterback (28), passing yards (10,690) and passing touchdowns (90). He finished No. 5 nationally in passing touchdowns (31) and No. 6 nationally in passing yards (3,380) in his final season at Memphis as he led the Tigers to an 8-3 record. He was named MVP of the Montgomery Bowl in Memphis’ first bowl victory since 2014. He announced following the game he will now pursue an NFL career.

“Brady White has meant so much to me and everyone here,” said Memphis head coach Ryan Silverfield. “He has been an incredible leader and an ideal representative of not only our football program but the entire University. An award as prestigious and meaningful as the Campbell Trophy is the perfect honor for him. If I ever have a son, I hope he's like Brady White. I think that's one of the best things you can ever say about a young man. He's done it the right way, he's a legend and I know he's going to continue to be successful as he goes forward.”

Academically, White is currently a PhD candidate in liberal studies. He earned a bachelor's degree in business from Arizona State and a master's degree in sports commerce at the UofM.

The Santa Clarita, Calif., native was named to the American Athletic Conference All-Academic Team in 2018-19 and 2019-20, and CoSIDA Academic All-District in 2019. He was a Dean's List student at the UofM for the 2018 fall and 2019 spring semesters while earning his master's degree in addition to being a Tiger 3.0 Club member for three consecutive semesters. At Arizona State, White was named to the 2016 PAC-12 Conference All-Academic first team.

“We are extremely excited for Brady,” said Laird Veatch, UofM athletic director. “He is among the most impressive student-athletes I have had the privilege to be around, and we can’t wait to see what he accomplishes in the future. Memphis Athletics is very appreciative of Archie Manning, Steve Hatchell and the selection committee for recognizing Brady’s remarkable accomplishments as a student-athlete and a person.”

“Brady is the definition of what it means to be an exceptional student-athlete,” said UofM President M. David Rudd. “His efforts on the field, in the classroom and in the community represent everything our University is about. It’s a great honor for a legendary Tiger to be recognized with such a prestigious award.”

White has also been a leader in community service. He has participated in many visits to local children's hospitals, speaking engagements at local elementary schools and much more over his three years at Memphis.

During the pandemic, White participated in Zoom calls with the Memphis Youth Detention Center to speak with recently released juveniles to help them navigate the transition from the center. He also recently helped form and create a plan for the Memphis football's All-In Gratitude program, an initiative focused on 30 days of giving thanks during the month of November.

“A doctoral student who ranks as Memphis’ all-time leading passer, Brady White is the epitome of what the Campbell Trophy Presented by Mazda represents,” said NFF Chairman Archie Manning, whose sons, Peyton (Campbell Trophy recipient) and Eli, were NFF National Scholar-Athletes in 1997 and 2003, respectively. “Working towards one’s PhD is a daunting challenge by itself. To do it while excelling at the highest level of college football is truly exceptional. Brady embodies the scholar-athlete ideal, and we are proud to have him as a member of this elite fraternity.”

White is also one of five players selected as a First-Team Senior CLASS Award All-American, was one of nine semifinalists for the Wuerffel Trophy and was a top 15 candidate for the Johnny Unitas Golden Arm Award.

“Brady and his fellow members of the 2020 NFF National Scholar-Athlete Class represent more than just their standout athletic ability seen on the field,” said NFF President & CEO Steve Hatchell. “Their academic achievements and their contributions as leaders in the community send a powerful message about the young men who play our sport. They have taken full advantage of the educational opportunities created by college football, and they have created a compelling legacy for others to follow.”