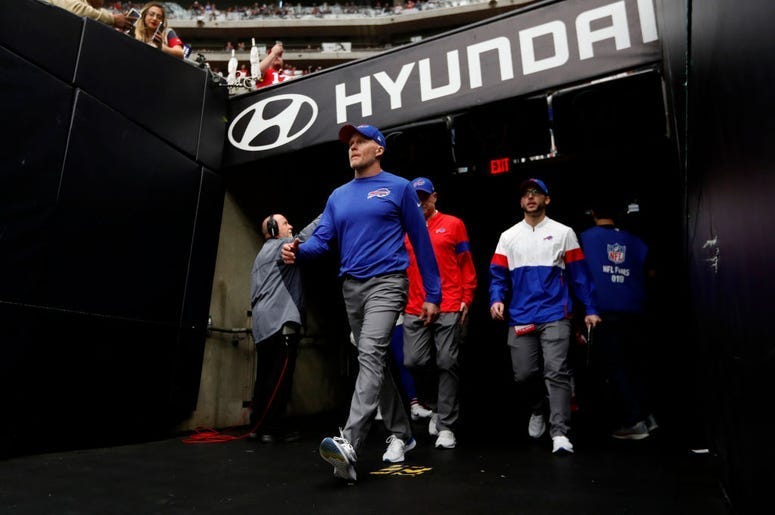 The National Football League's annual owner's meetings were supposed to be held next week in Palm Beach. They were canceled several weeks ago due to the Coronavirus pandemic. The league has already canceled all public events-related activities for the NFL Draft in Las Vegas, which were going to be held on and around the draft, from April 23-26. Before that was scheduled to take place, all teams would have started Phase One of their offseason programs. In fact, teams with new head coaches were allowed to convene for the first time in just twelve days, on April 6. The Bills, and 26 other teams with returning coaches, were scheduled to begin on April 20. We already know that's not happening. At this point, all facilities across the league are closed. Players and coaches can't even see each other, much less be on a football field together.

There's a growing sense of worry - and even pessimism - among fans, reporters, and others that the 2020 season could be in jeopardy. Even in a best-case scenario, with "stay-at-home" orders in place in some states (including New York), the entire country (supposed to be) using social distancing, and really no timeline as to when we'll all be able to see friends, family, and co-workers as we're used to, it's looking more and more like OTAs and minicamps won't be held this May and June, as usual.

That means best-case scenario may very well be late July or early August for NFL training camps, the first time teams can get together and do any sort of football activities. Aside from the obvious logistical questions about scheduling, as well as how physically fit players will be upon return, the next set of questions will be, "what teams are best set-up and equipped to handle this?" The answer to that will most likely correlate to the same teams having the best chance for success on the field in 2020.

Bills fans should feel good about their team's ability to hit the ground running and dealing with the chaotic scheduling and shortened offseason better than most teams, for three important reasons:

The Bills have signed some new players, and traded for wide receiver Stefon Diggs. But they return every single one of their offensive players who were a part of their "most used lineup" last year. By a wide margin, this was their most common personnel on the field: QB Josh Allen, RB Devin Singletary, WR Isaiah McKenzie, WR Cole Beasley, WR John Brown, TE Dawson Knox, OT Cody Ford, OT Dion Dawkins, OG Jon Feliciano, OG Quinton Spain, C Mitch Morse.

Those eleven players, all playing together, accounted for 11.6% of the plays the Bills ran, the third-highest percentage of any team's most common lineup, behind only the Cowboys and Rams. The only thing that should change is Diggs playing in place of McKenzie, unless the Bills move Cody Ford to guard. In that case, either Ty Nsekhe, who often rotated series' with Ford, would play right tackle, or they would welcome in one more newcomer. In either case, it would still be a very low rate of turnover on offense, keeping almost all of the same players together.

On defense is a similar situation. The Bills had the second-lowest use of "unique lineups" in the NFL through the regular season, behind only the Steelers. That means no matter what eleven players were on the field at one time, it was almost always a group that had played together as an eleven-man unit. Here's the personnel they used the most, as a grouping: DE Jerry Hughes, DE Trent Murphy, DT Jordan Phillips, DT Star Lotulelei, LB Tremaine Edmunds, LB Matt Milano, CB Taron Johnson, CB Tre'Davious White, CB Levi Wallace, S Jordan Poyer, S Micah Hyde. Of that list, only Phillips is gone, signing a free agent deal with the Arizona Cardinals. But Ed Oliver actually played more total snaps than Phillips did last year, so they are essentially bringing back the entire main defensive unit.

All told, that's 21 of 22 starters returning, a huge benefit when it comes to understanding roles.

According to ESPN's Field Yates, the Bills, New Orleans Saints and San Francisco 49ers will enter 2020 as the only teams to have the same head coach and offensive and defensive coordinators for more than two full seasons. It's pretty remarkable to think about the kind of turnover that takes place so quickly in the NFL and, considering all the changes the Bills went through for the better part of two decades, maybe even more incredible they're in this short list. But it's obviously a benefit, and even an advantage, if there is a shortened offseason. Offensive coordinator Brian Daboll and defensive coordinator Leslie Frazier already have their systems in place. Players don't have to learn new terminology and schemes from scratch. They'll know the playbook from the get-go when they hit the field. Now add on the previous point of how many returning players each unit will have and that benefit multiplies, becoming even more apparent and bigger.

In the case of Frazier, he and head coach Sean McDermott will now be running the defense for four straight years, and five regular players - Hughes, Lotulelei, White, Hyde, and Poyer - have all spanned that time with them.

In the case of Daboll, he also has his quarterback returning. Of the five quarterbacks taken in the first round of the 2018 draft, Josh Allen will be the only one to have the same coordinator since he was drafted, a big deal for a young QB. An even bigger deal for an entire offense that will be together again.

Now Sean McDermott's culture and process will matter more than ever before. Words and phrases that are loosely thrown around or even mocked by some, truly mean something to the Bills head coach, as well as their general manager Brandon Beane. And not just as a sound bite. They practice what they preach when it comes to team building and the every day approach they expect.

Although different players do come and go every year, McDermott started laying the foundation for the daily habits and expectations he has for his team the minute he arrived at One Bills Drive over three years ago. Leaders like Kyle Williams and Lorenzo Alexander were relied upon to reinforce them. Younger, soon-to-be team leaders like Hyde and Poyer, followed by Allen and Edmunds, who play the traditional leadership positions on each side of the ball, took over their mantle.

A culture doesn't have to be good or bad. It's different for every team, every organization. It simply means how they operate, usually on a day-to-day basis. Just like building on the continuity of coaches and players on the field, the process of creating and then building on the culture of the team can matter to success.

It may matter now more than ever.

music
Watch 27 drummers come together to cover 'We Are The World' for Inauguration Day
music
'Harry Potter' star Matthew Lewis says it's ‘painful’ to watch himself in the films
sports
Robin Lopez hilariously ripped foul call: NBA 'full of theatrics and thespians… you should all be embarrassed'
news
Customer wanted by police after allegedly throwing bottle at store employee amid face mask altercation
music
Tim McGraw admits Taylor Swift's first single made him wonder if he'd 'jumped the shark'
music
Listen To 'Coop's Rockin’ Country Saturday Night' on RADIO.COM