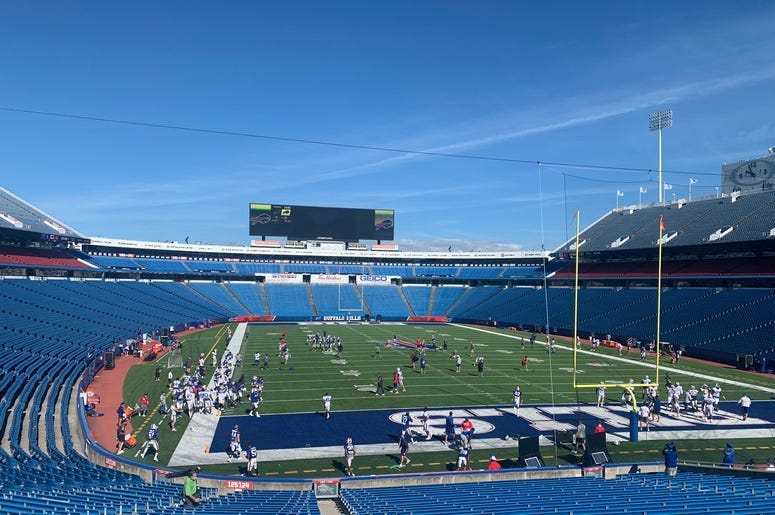 Whistles. Music. Hitting and tackling. Inside an NFL stadium. Amid the Covid-19 pandemic and so much that has changed, Thursday's Buffalo Bills training camp practice looked, sounded, and felt normal. The team hit the field under bright and sunny skies in Orchard Park for about a two-hour session, live tackling for the first time this camp.

The defense definitely got the better of the offense for most of the morning. They really made it tough for them to move the ball at times, and even came up with a few turnovers. That said, the offense did have a couple highlight plays, including Duke Williams' making another great high-point catch, just as he did earlier in the week, Josh Allen connecting deep with Stefon Diggs, and rookie wide receiver Gabe Davis taking a pass to the end zone for a long touchdown (more on that later). But on a down-to-down basis, the defense was clearly the winner overall.

It was a huge day for the kicking battle. Veteran Stephen Hauschka was short on multiple 52 yard kicks, while rookie Tyler Bass was wide on a 44-yarder but drilled everything from 50-plus, including one from 56-yards out, which cleared the cross bar pretty high up. Hauschka did hit one from 52-yards later. Unofficially, Hauschka was 5-for-8 overall. Bass was 7-for-8.

New punter Lachlan Edwards was in a Bills uniform for the first time.

I focused on Harrison Phillips a bit to see how he looked on the first day of live tackling, recovering from his ACL surgery. He looked good and show no signs of any issues. He was really strong at the point of attack. It was great to see for him personally, but that of course could be a huge difference for this defense on the field as they've already lost Star Lotulelei, who opted out of the 2020 season.

Defensive end Bryan Cox, Jr. had a good day. He showed patience and poise setting the edge. Rookie A.J. Epenesa has very powerful. He uses a bull-rush and his length really well and to his advantage.

After seeing rookie wide receiver Isaiah Hodgins make some plays earlier in the week, fellow rookie wideout Gabe Davis was the one who stood out on Thursday. Davis had a nice practice overall, but had one of the plays of the day when he caught a pass from quarterback Davis Webb (it was a Davis-to-Davis connection) near midfield, then took it to the house, running away from a couple defenders for a touchdown. Davis showed a lot of speed on the play for bigger receiver.

Don't mistake rookie running back Zack Moss as just a between the tackles runner. Yes, he's physical, but he has very good vision, finds holes and the edge, and is way more shifty than many may realize.

Love watching the OL and my look-a-like (albeit much bigger) Bobby Johnson coach. pic.twitter.com/Wmpm6EDP45