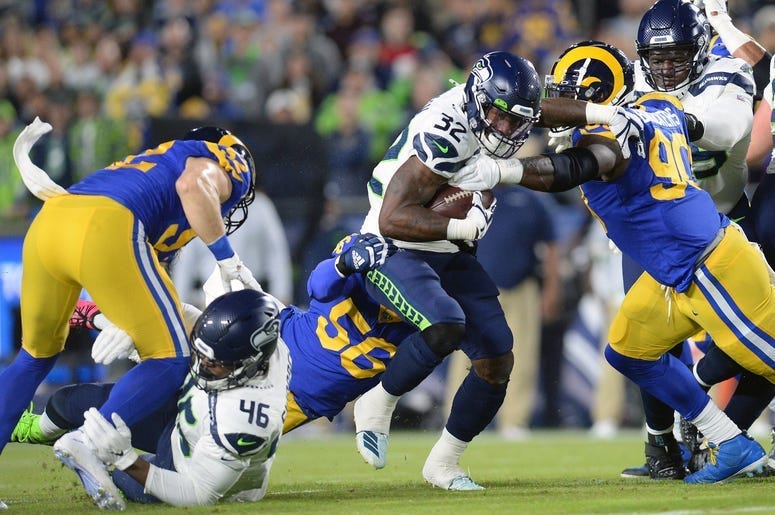 15 days now to the NFL opener. Seems to be full steam ahead for pro football, after months of uncertainty. We still don't know what's coming but at the moment things look good.

In fantasy circles things have been proceeding this summer pretty much as normal. The big industry drafts have gone along on schedule, with the only big change being limitations on in-person drafts. So many drafts are online anyway, big and small, that fantasy football has hummed along.

No preseason games makes forecasting the season different, but maybe not tougher. Preseason is such a lie anyway, you might be just as likely to be fooled by something that happens as you are to be clued in. For fantasy purposes, you might see how certain rookies are standing out, or not standing out, and make judgments. Myself, I'm fine this way. Remember that the playing field for available infomation is still level.

I've been through about a dozen off-season drafts, ranging from inexpensive best-ball leagues all the way back in the spring to big-time industry leagues more recently. I'm participating in the Scott Fish Bowl, FFPC's Pros vs. Joes, the DraftSharks Invitational and Mike Dempsey's Football Diehards Dynasty start-up. They're all fun, and the best measurements for what the top players in the game see coming this year. I'm excited to see if I can hold my own with them.

Here are five examples of each from my drafts so far:

Not a concerted effort, but I'm ending up with a lot of shares. I am perfect with Carson as my second running back. (If he's my first, I'm pushing it.) Carson was RB11 last year, ahead of Alvin Kamara, Joe Mixon, Kenyan Drake and Miles Sanders, all of whom are being picked well ahead of him. I see him as the clear lead running back in Seattle -- not worried about Carlos Hyde -- and that's a team that successfully has fed its running backs.

The bigger thing is that Carson's average draft position is mid-third round. Running backs dry up quickly in drafts, and by as early as Round 3 you can find yourself wondering about your chances at that position. Carson provides security with that Round 3 pick. A reasonable outcome for picking, say, 9th in your draft is: 1.09 Derrick Henry, 2.04 Julio Jones, 3.09 Carson, 4.04 Cooper Kupp, 5.09 Kareem Hunt. A great start, in my opinion.

Johnson has been a source of much frustration for fantasy owners over the years. I hear the arguments against him -- his age, his very few actual good seasons, his durability. But I'll take my chances. His ADP is also mid-third round, so he works in the same context as Carson. If you draft a second receiver in that round it can be really tough to fill out running backs.

Houston did nothing less than trade DeAndre Hopkins for him, and the coach is who made the trade. To me that screams of Houston making every effort to look good in that deal. (That won't be easy.) I bet they run the heck out of Johnson, and throw to him a lot too. The Texans' receiver corps is somewhat iffy so Johnson should play a big role.

No, he hasn't been a great player. But volume wins in fantasy, and I see a lot of that here.

Stafford was on a killer pace last year before an injury. There's some hype about Detroit and I'm on board. I think the division is soft and the Lions are a nice, live long shot. As far as fantasy goes, the offense is the same plus De'Andre Swift, arguably college football's best running back last year. T.J. Hockenson, if healthy, is a potential star at tight end. I like everybody in this offense.

As for Stafford, well, he's a quarterback so you can wait all day. According to fantasyfootballcalculator.com, Stafford is currently the 13th QB drafted, into Round 10.

Ask yourself, how many quarterbacks would you definitely start over him most weeks? For me there are three or four only. And I like my teams more without those guys, and with an RB or WR instead.

It'll be interesting to see where Goedert ends up production-wise. Could he threaten to lead a confusing Eagles group of skill-position players in targets? Could he even out-perform Zach Ertz?

I don't need him to do either of those things to make him worthwhile at an ADP of 157 (Round 14). He's your second tight end, probably. So not much to lose. I think the upside is massive. Love the player, and the Philly staff. I don't know if he'll start for me right away on my good teams, but of players you're drafting in Round 14, who will be?

Plusses include his talent, his team (losing a lot?), his new creative coaching staff, and, as with Goedert, his price (ADP 163). Minuses: at that price, are there any? That would exist in the players you could draft instead. Alshon Jeffery, who is injured, is going ahead of him. So is Larry Fitzgerald. Come on! Samuel should even get handoffs from Carolina. He's good.

Hopkins is fine, but at ADP of 18 I like other guys a lot more -- most of all Chris Godwin (ADP 21). I'm a student at the school of Watch Out for Wide Receivers on New Teams. I'm fine with the idea of Arizona being better, even good, but I think the prices are too high for Hopkins and Kyler Murray. Kenyan Drake, however, I think is believable as a top 10 running back.

I love what I know about Diggs, the player. He's a technician. To me the trade isn't a move the Bills had to make, but I've got no problem with it. They were a good team last year and they're taking their shot.

I just don't see them being a highly successful passing offense. Diggs' ADP is 64, or into Round 6. I can get Marquise Brown of Baltimore for the same price. Brown played hurt throughout his rookie season, was the first receiver drafted in his 2019 class, and is almost definitely going to be the #1 receiver on an elite Ravens offense. Maybe this comes down to which quarterback you like more for their receivers' production, Josh Allen or Lamar Jackson.

It does for me.

Cool story, Mostert. But there's no way I'm investing in a Kyle Shanahan running back in the beginning of Round 5, which is what Mostert costs. Tevin Coleman is still there, and Jerick McKinnon is back.

Avoiding having to pick Mostert, if you'll allow, comes from how you spend your first four picks. I don't want to have to need a running back in this round. If I do, I'd prefer Hunt or Ronald Jones, who I wrote about during the Fish Bowl. I don't mind taking a late flier on McKinnon, or even drafting Coleman in the mid-rounds for depth.

I'll tell you what this is, because I'm not proud or excited to put the player Pro Football Focus labeled the best non-QB in the NFL on my "Out" list. Kittle is a stud.

Tight end is, you either draft an elite one early and "set it and forget it", or you wait and wait until you're probably resigned to a life of waiver-diving at the position. Well, I consider my effort on the waiver wire to be an advantage of mine. I'll be out there scrounging for the right streamer at the position, or whatever. I'm not afraid to live like that.

If you want Kittle at pick 3.01, where he's going, fine. (Actually, in terms of current ADP there is a little bit of a soft spot there. Players going around Kittle include Patrick Mahomes, Lamar Jackson and James Conner, none of whom I'm excited about at that price. Plus, if you're picking on the turn you're going to have to pick two guys here. Hmmm ... maybe in that exact situation I do get to Kittle.)

This almost feels cheap, as Mack has been supplanted by rookie Jonathon Taylor (or is about to be). He's going at the top of Round 7. I'd rather have Jordan Howard in Miami, or rookie Antonio Gibson in Washington, based on situations. Mack feels to me like a player you're going to done with by mid-season at the latest. Don't spend an early seventh-round pick on such a player.