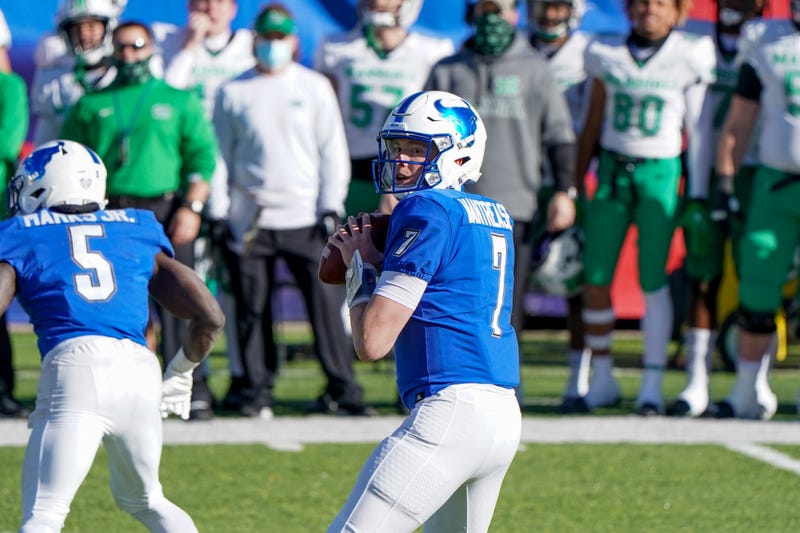 For the first time in program history, the University at Buffalo Bulls football team has finished a season ranked in the Top-25 of the final Associated Press and Amway Coaches College Football Polls.

The program announced on Tuesday that the Bulls finished the 2020 season as the 25th-ranked team in the final AP and Coaches Polls.

#25 in the final Amway Coaches Poll, too! 🤘#UBhornsUP pic.twitter.com/JscUZY0bt9

The Bulls finished the 2020 campaign with a 5-0 record in the shortened regular season, earning the program its third MAC East division title. However, the 23-ranked Bulls, at the time, were upset in the MAC Championship Game on Dec. 18 when they dropped a 38-28 clunker against the Ball State Cardinals at Ford Field in Detroit, Michigan.

The Bulls did bounce back on Christmas Day with a 17-10 win at the Camellia Bowl over Marshall University at the Cramton Bowl in Montgomery, Alabama. The win for Buffalo capped off a 6-1 finish to the season, and helped earn the Bulls their second bowl game victory in as many years.

"It's a tremendous accomplishment to finish the season ranked in the Top-25 for the first time in program history," head coach Lance Leipold said in a team statement. "I'm proud of our players and staff for the work they put in and preserving through this atypical year. I look forward to building on this as we turn the page to next season."

The Bulls also finished the 2020 season ranked as one of the better offenses in the entire nation. Buffalo finished as the fifth-ranked team in scoring offense (43.4 points per-game), as well as the second-ranked team in rushing offense (287.4 yards per-game) led by the duo of Jaret Patterson and Kevin Marks.

The program also announced its opponents for the upcoming 2021 season on Tuesday.

The 2021 schedule will feature conference matchups with Bowling Green, Ohio, Northern Illinois and Western Michigan at the friendly confines of UB Stadium in Amherst, while the Bulls will travel to Akron, Kent State, Miami (OH) and Ball State.

All the dates and times for Buffalo's conference games next season will be announced at a later date.

Meanwhile, Buffalo will play four non-conference games to start the 2021 season, beginning with a matchup against Wagner from the Northeast Conference on Saturday, Sept. 4 at UB Stadium. The following week, the Bulls will travel to Nebraska to face the Cornhuskers of the Big Ten on Saturday, Sept. 11.

On Saturday, Sept. 18, Buffalo will return home to host Coastal Carolina, who happen to be the defending champions of the Sun Belt Conference. Finally, the Bulls wrap up its non-conference schedule on Saturday, Sept. 25 on the road against Old Dominion from Conference USA.

The times of those games will be announced at a later date.