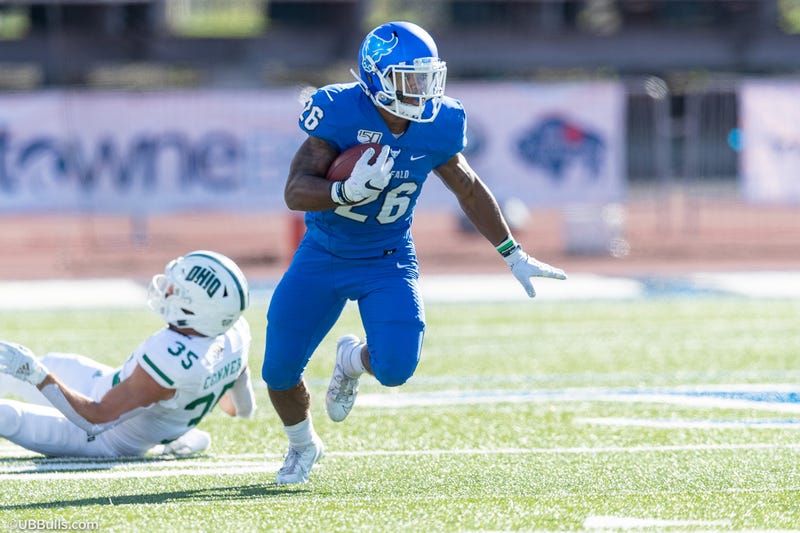 One of the best football players to ever play at the University at Buffalo is making the jump to the National Football League in 2021.

Bulls star running back Jaret Patterson announced on Tuesday, via his Twitter account, that he is forgoing his senior season in Amherst to declare for the 2021 NFL Draft.

The 21-year-old junior had a historic season in 2020 in just six games for the Bulls, leading the nation with an average of 178.7 yards per-game. He also finished the campaign tied for second in the nation with 19 rushing touchdowns, matching his career-high with the program.

In the team's five regular season games this season, Patterson rushed for 1,025 yards, which tied the FBS record for the earliest time for a player to reach 1,000 yards in a season. He finished the campaign with 1,072 rushing yards, become the first player in program history to rush for 1,000 in his first three seasons.

Patterson made history in the team's Week 4 matchup with Kent State on Nov. 28, where he rushed for 409 yards and eight touchdowns. His eight touchdowns tied the FBS record for the most rushing scores in a single game, while his 409 rushing yards was the second-highest total ever recorded in an FBS game.

In his three-year career with the Bulls, Patterson rushed for 3,884 yards on 636 carries, while also finding the end zone an astounding 52 times.

With the production he put up in the 2020 season, Patterson earned some high honors as the MAC Offensive Player of the Year, while also earning the Vern Smith Leadership Award, given annually to the top player in the conference.

In addition, Patterson was named as a First-Team All-American by USA TODAY, while also being named a Second-Team All-American by the Associated Press. He became just the second Bulls player in program history to be named an AP All-American at the FBS level, joining pass rusher Khalil Mack, who earned the honor in 2013.