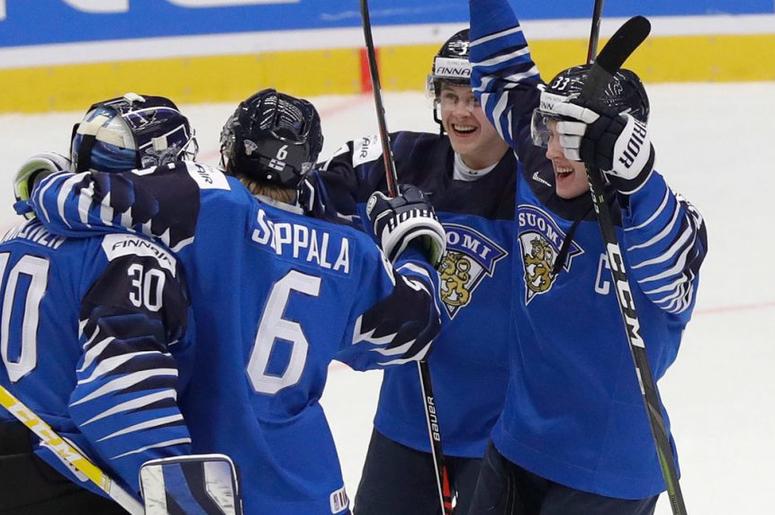 Two of the Buffalo Sabres' four prospects taking part in the 2020 IIHF World Junior Championship in the Czech Republic will have a chance to medal after wins in the quarterfinal round on Tuesday in Ostrava.

Dylan Cozens and Team Canada, as well as Erik Portillo and Sweden are heading to the semifinal round in Ostrava on Saturday, while Mattias Samuelsson and the United States, as well as Matej Pekar and the host Czechs are packing their bags and have been eliminated from the tournament.

Canada advanced to the semifinal round with ease after a 6-1 win over Slovakia, thanks, in large part, to a two-goal effort on the night from captain Barrett Hayton (Arizona Coyotes).

Hayton opened the scoring in the first period at the 6:47 mark as Cozens made a nice play on the forecheck to force a turnover in behind the Slovakia net. He chipped the puck loose to forward Alexis Lafreni?re (2020 NHL Draft), who found Hayton in front of the Slovak net for a one-time feed in the slot.

While the Slovaks got outshot 10-7 in the first period by the Canadians, they did a nice job containing their opponent and limiting the scoring to just one goal against.

However, things fell apart for Slovakia in the second period and early as Canada scored four goals in the opening 10:50 of the period to blow the game wide-open.

The period started with Canada upping its lead to 2-0 at the 1:21 mark as forward Connor McMichael (Washington Capitals) decided to hold on to the puck himself on an odd-man rush and fired a wrist shot past the blocker of goalie Samuel Hlavaj.

Just 2:21 later, the Canadians took a 3-0 lead when defenseman Jacob Bernard-Docker (Ottawa Senators) crept in from the point with the puck and fired a wrist shot past the blocker of Hlavaj. On the play, Cozens picked up his second assist of the game as he entered the zone with the puck, and eventually got it back to the point for defenseman Jamie Drysdale (2020 NHL Draft).

Near the halfway point of the period, Liam Foudy (Columbus Blue Jackets) and Lafreni?re scored 48 seconds apart to extend the Canadian lead to 5-0 before the end of the second.

Hayton scored his second goal of the game just one minute into the third period as he wired a wrist shot from the right faceoff circle on the power play to make the score 6-0.

Goalie Joel Hofer (St. Louis Blues) nearly pitched the shutout for Canada in this one, but his bid was spoiled at the 6:10 mark of the third when forward Oliver Okuliar walked into the Canadian zone and fired a slap shot from the faceoff circle to the top, far-side corner of the net.

From there, Canada hit cruise control and strolled its way to the win to advance to the semifinals.

The Canadians ended up drawing Finland in the semifinals with the new re-seeding system at the tournament after the Finns stunned the United States with a 1-0 win in T?inec

This game remained tied at 0-0 before heading into the third period when Finland was handed a power play chance with 16:26 remaining in regulation. Finland then went to work in the U.S. zone and finally found an answer against American goalie Spencer Knight, who was on top of his game from start to finish.

It took the Finns just 49 seconds into the power play to score the only goal as forward Joonas Oden parked himself in the slot and wired a one-time slap shot off a no-look feed from Kristian Tanus high over the shoulder of Knight and in.

Throughout the game, the United States did not look great offensively, despite outshooting the Finns 30-29 overall. A lot of their shots did not come from great areas around the net, and the team did not generate enough desperation, especially late in the game down a goal. The U.S. ended up only generating seven shots on goal in the final period, which is not good enough when down 1-0 with 15:37 left in the game.

While Knight looked very sharp in net for the U.S., Justus Annunen (Colorado Avalanche) looked just as sharp as he turned away all 30 shots faced to earn the shutout and punch Finland's ticket to the semifinals.

As for Samuelsson, the American captain had an alright tournament, but did not do much to stand out from the rest of the crowd. The Sabres' second round pick (32nd overall) in the 2018 NHL Draft ended his tournament being held pointless with five shots on goal, a plus-3 rating and six penalty minutes while averaging 19:18 of total ice time per-game. The 19-year-old, arguably, had his best game against the Russians in the preliminary round with his physical play and defensive play being in check throughout the night, not allowing the Russians to get too many chances throughout the night.

The top three players of the tournament for the Americans featured Knight, and forwards Shane Pinto (Senators) and Trevor Zegras (Anaheim Ducks), but their effort came up just short in a bid to play for the right at a medal.

Last year, the United States lost to Finland in the gold medal game at the 2019 IIHF World Junior Championship in Vancouver. The U.S. now has a two-game losing streak to the Finns after winning their prior three matchups at this tournament.

The other semifinal matchup with feature the top seed in the entire tournament, Sweden, taking on a Russia team that started the quarterfinals off with a 3-1 win over a stingy Switzerland team in T?inec that held tough against the Russians all game.

All of the scoring came in the second period of play, starting with Russia taking the 1-0 advantage with a power play goal from forward Dmitri Voronkov (Blue Jackets), who was stationed in front of the Swiss net.

After Switzerland tied the game nearly six minutes later thanks to a goal from Gaetan Jobin, Russia re-took the lead for good at the 14:07 mark when forward Alexander Khovanov (Minnesota Wild) was able to tap a puck past the right leg of goalie Luca Hollenstein off a 2-on-1 feed from Grigori Denisenko (Panthers).

Russa added one more goal for good measure with 1:47 remaining in the second as Voronkov scored his second goal of the contest as he kept his stick down on the ice in front of the Switzerland net and was able to direct a pass from Khovanov pats Hollenstein.

Russian goalie Yaroslav Askarov (2020 NHL Draft) was not tested all that much throughout the game, facing just 15 shots on goal, but a few of Switzerland's chances were golden opportunities for scoring chances.

Just one year after a magical run to the medal rounds of the World Juniors, Switzerland had a team that could have made it back to the semifinals again, but they end up just falling short.

Sweden also advanced to the semifinals of the World Juniors with ease after a 5-0 shutout win over the host nation in Ostrava.

It was all Sweden from start to finish as the Czechs had zero answers for the tournament's top seed after preliminary play. The Czech Republic only managed 23 shots on goal, but ended up giving up five goals on 37 shots faced in defeat.

Swedish forward Nils H?glander (Vancouver Canucks) continues to put in his bid for the tournament MVP with a two-goal night, as well as an assist to up his total tournament point total to 10 (5+5). With his performance, H?glander moves into the top spot on the scoring chart ahead of Zegras, who had led the tournament with nine points on nine assists.

Portillo was back to being the third goalie on the roster after being listed as the second netminder for Sweden's preliminary finale against Slovakia.

As for Pekar, he went from being the Czechs' top line right winger to becoming a seldomly utilized player at the end of the tournament. The 19-year-old only picked up one assist in the tournament, while registering seven shots on goal, a minus-1 rating, and eight minutes in penalties, while averaging just 10:13 of total ice-time.

Here is the schedule for the semifinal round in Ostrava on Saturday:

In the relegation round, the Germans beat Kazakhstan 4-0 in the first game of their best of three series.