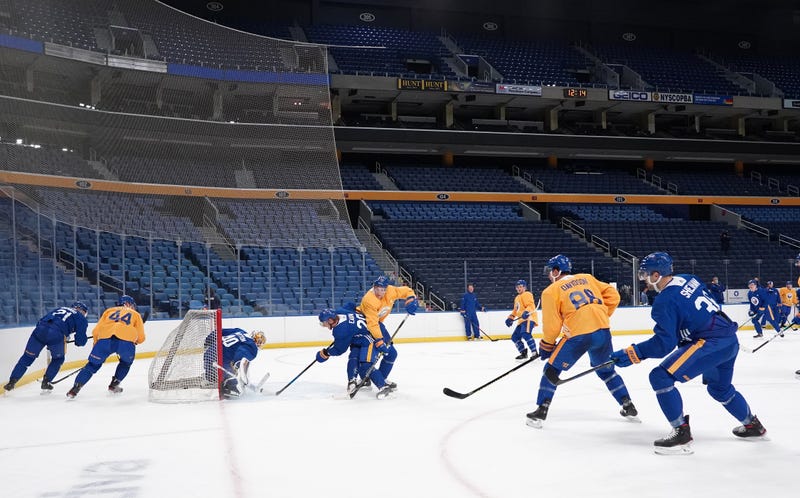 The Buffalo Sabres are getting set to hold their second Blue and Gold Scrimmage of training camp on Saturday night at KeyBank Center.

The first scrimmage of training camp on Monday was a good first test for the players to get the taste of game action for the first time in nearly 10 months.

Heading into Saturday's action, Sabres head coach Ralph Krueger is expecting this scrimmage to be as close to a simulation of a regular game day schedule once the season starts on Thursday, Jan. 14 against the Washington Capitals.

"What an important day that is for us psychologically," Krueger said following Friday's practice. "I keep mentioning that there's 10 games still in the month of January. Never before has any NHL team gone into what all 31 of us are going to be doing, and that's playing without any exhibition games and playing for points right away. So tomorrow is important.

"We expect another level compared to the first scrimmage. We have the pregame skates, we're going to have the normal meetings in the morning, normal meetings at night. Both teams, coached by Steve Smith and [Don] Granato, will attack the game as if it was for points. ... There won't be much noise in the building, but there will be a few scattered people, management people, media and so on. That's a new world that we need to get used to for the near future, hopefully not for the long haul, but many things that will be very good to get ready for Thursday."

Friday's practice saw Krueger and his coaching staff change up the lines just a bit to get a new look and see how well the combinations can work.

The team practiced Saturday morning ahead of the evening's scrimmage, where the group was split in two for the game:

A number of those lines that were on the ice on Saturday morning remained the same from Friday. Here is how the lines looked for each group:

Jack Quinn and C.J. Smith both skated as the extras

Both Dylan Cozens and Jack Quinn, who got in their first practice of training camp on Friday, ended up skating with the Blue Group in the morning, but according to Krueger, there is a likelihood that both players will not skate on the same team come the evening.

"The very final rosters will be released at 5:30 p.m. EST. We'll probably make a shift there and put Quinn over on to the Gold Team. Otherwise, we will look forward to seeing them both in action," Krueger said following the pregame skate. "We spent some time filling them in on systems this morning, but we also don't want to overload them. They've had quite an intense 53 days with Team Canada, and we want to just kind of slide them into what we're doing here. They did really well in the Blue Group yesterday. A lot of speed, a lot of skill, and we're excited to see them in action today."

As for Quinn, he was playing on the right wing at practice on Friday on a line with Brett Murray on the left wing and Steven Fogarty at center. He skated in and out of Eichel's line during Saturday's morning skate, so it's likely that he will serve as an extra skater if, or when he makes the switch to the Gold Team.

Saturday's scrimmage will also see Eichel, Victor Olofsson and Linus getting in to their first scrimmage of training camp. Eichel and Olofsson both missed Monday's scrimmage with upper-body injuries, while Ullmark was unable to play due to immigration issues that forced him to quarantine.

However, one player who will not play in Saturday's scrimmage is Andrew Oglevie, who missed Friday's training camp practice due to a lower-body injury. However, Krueger said on Saturday that his injury is a minor one, and that the team is taking a day-to-day approach with him.